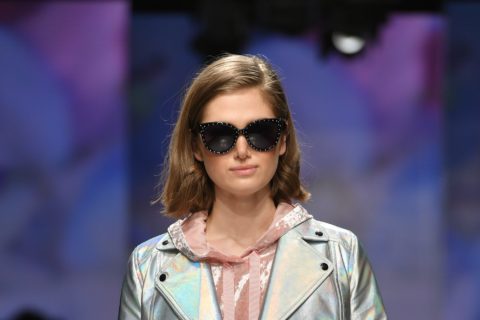 Meghan Markle’s favourite coat designer Bojana Sentaler — the Royal-to-be wore a Sentaler design over the Christmas holidays — joined society journalist Shinan Govani for a live version of Donna Bishop’s podcast Fashion Talks, in association with CAFA. The trio discussed the British Royal family’s influence on fashion, which began long before the current obsession with Kate Middleton and Meghan Markle. “You can think of the Royal Family as the original reality show. They were the first influencers,” said Govani. And the influence they wield is potent. Sentaler told the audience that when Kate Middleton wore one of her wrap coats during her tour of the Yukon,  it sold out immediately and proceeded to go on back order four times.

MacMillan’s first runway show in two seasons was sugar and spice with an added dash of bad girl latex. The collection was an homage to Sofia Coppola’s candy-coloured 2006 film Marie Antoinette, and featured plenty of plush, furry materials in shades of millennial pink, and its successor pastel blue. But Marie Antoinette’s adventurous side came out to play in the biker-inspired jackets and kinky vinyl pieces, including pants that bore a distinct similarity to these Atelier Guarin flares. A standout piece from the collection was a moto jacket made out of a holographic material, which we very much hope somebody wears to next year’s Grammys.

Tinashe Musara, one half of Montreal-based duo, WRKDEPT, describes their F/W 2018 collection as “the Royals on acid.” Traditional royalty enmeshes with drag queens in their collection filled with clashing colours, oversize silhouettes and tulle plumage. The brand rejects all conceptions of gender and says their clothes are meant to be worn by everyone. “As a unisex brand, there’s a real sense of buying what you want,” says Musara. The collection’s anti-bodycon proportions were heavily inspired by ‘80s underground club icon Leigh Bowery, as was the make-up. People of all genders proudly walked the runway with dotted faces like a human Twister board, and lips covered in rainbow candy sprinkles.

Kardinal Offishall kicked off the Hendrixroe F/W 2018 show, debuting a new song while decked out in a metallic motorcycle jacket and pants from the label. The show’s soundtrack defied convention, spanning from Black Sabbath, to Rage Against the Machine, to Black Sheep. “It’s about celebrating who you are, and letting your freak flag fly,” says designer Jordan McKay. Retro fur-collared coats and brocade suits look like they could have been flown in directly from Woodstock 1969. “If Jimi Hendrix and Marilyn Monroe were to meet in the bathroom at Coachella and say, ‘We should do a brand together,’ this is what the clothes would look like,” says McKay.