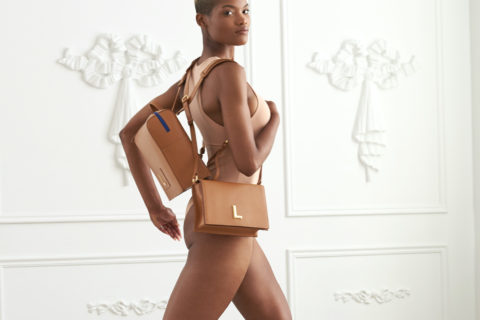 Toronto-based Brand Dr. Liza Has Expanded From Footwear to Bags

“I’ve always believed that fashion should be functional,” Dr. Liza Egbogah says. The Toronto-based osteopath who launched a line of shoes several years ago–an offering that’s grown from a comfortable classic pump to include booties, sandals and flats–has just released a collection of bags that also ties into this ethos.

“I often have patients come in with neck pain, shoulder pain, and back pain,” she says. “They didn’t know what the cause was. But when you looked at their posture, you’d see that they were tilted to the side, or one shoulder was significantly raised compared to the other side. When I’d ask what side of their body they’d carry a bag on, it always correlated with the side where the shoulder was raised. One of the reasons that happens is that over time, if you put a bag on your shoulder on one side, your body will naturally compensate and raise that shoulder to almost make a ‘hook’ for a purse with your muscles and your fascia, which is the tissue that connects everything in the body.”

After years of treating these physical complications caused by wearing the many different bags available on the market, early last year, Dr. Egbogah began drawing designs for her own brand. She was inspired by not only the pain her patients experience, but how they as professionals wanted to feel wearing her pieces. “A lot of the people I see are quite image conscious,” she says, adding that some would say, “I’d honestly rather live in pain” than carry some of the ergonomic backpacks and bags that were created in the past. “I wanted to make something that looks like a true fashion piece but with all the qualities that make it comfortable, and good for your posture,” Dr. Egbogah says. “You look good and you feel good.”

She points out, though, that “there’s no quick fix when it comes to posture”, and says that for those of us working from home–even if we’re set up in a “perfectly ergonomic work station”– that it’s essential to devote thirty minutes every day to physical activity. “And if you’re going barefoot at home but are used to having shoe support, that’s a disaster for your body. I usually recommend a supportive flat,” she says, laughing as she adds, “I have to make slippers next, apparently. That’s what people are telling me.”

And when you tell Dr. Egbogah something, she listens. The new Dr. Liza bag styles feature an ergonomic design, a flat base for balance and cushioned shoulder straps, and come in colours ranging from classic neutrals to pops of pink and red. Dr. Egbogah says that the final looks were crafted from a combination of “feedback from her social network, science, and fashion. As much as I want people to be comfortable, I want them to aesthetically love them,” she notes.

An attention to eye-catching appeal is nothing new to Dr. Egbogah, whose footwear not only includes solid-hued pieces but shoes that also boast prints inspired by her African background. “I was born in Calgary but both my parents are Nigerian,” she says when asked about the vibrant Ankara prints available in her line. Not only are they connected to African design, but they also have a significance tied to her childhood years spent in Malaysia, where she learned the Batik techniques found in Southeast Asia in school. “I used to make these wonderful fabrics,” she recalls, saying that incorporating these wax prints into her products “felt like I was bringing something global together in my shoes.”

Dr. Egbogah knew from an early age that her calling was in medicine. “At age six, I realized I wanted to be a doctor,” she says. “I loved helping people. Back then, they would call me ‘the golden child’, and I assumed it’s because I have blonde hair–in the village where my parents are from, you have maybe one percent of the population that has blonde hair. But then later on, I found out it’s because my great-grandfather was the medicine man in the village, and they felt like I had that healing ability.” While she made t-shirts and scrunchies in her youth and was always inspired by her “stylish family”, Dr. Egbogah says she was unaware that this passion could ever be tied to her practice. “To now be a designer and doctor is amazing,” she says. “I didn’t know you could do both!”

Today, Dr. Egbogah sees the two disciplines as inherently linked. “We wear fashion because we want to look good, and we want good posture because we want to look good,” she says. “And it ties in to how people see us. As a Black woman, my parents always taught me that one of the ways to open doors for yourself and get people to see you differently is to stand up straight, to be tall.”

This advice raises an important concept that has been given extra attention recently as the Black Lives Matter movement continues to highlight systemic racism in all corners of life, from academics to employment. “I’ve been educating people in my stories because I think people see me and think, oh you’re successful–clearly racism hasn’t affected you too much,” she says. “I’m letting them know that every step of the way since I was a kid that I’ve had to overcome so many hurdles to get where I am. And I think that’s been helpful for them.”

Hi ?? I’m Dr. Liza and I just wanted to introduce myself. I am a body and posture expert and I designed these shoes for you so that you can feel as good as you look in your shoes ?❤️ ☀️ ☺️

As Dr. Egbogah and other BIPOC voices continue to bring these essential points to light on social media and during interviews, she expresses concern that people are becoming fatigued by the continued conversations around systemic racism and social injustices. “I was optimistic for a period, but now I feel like people are kind of losing momentum and the focus isn’t there anymore,” she says. “It’s disheartening.”

She also addresses the notion that the BLM movement has become commodified–that the pain and trauma exposed over the past weeks amplifies an unhelpful narrative. “It’s so important for media to show the positive side” of being part of BIPOC communities, she says. “People have to recognize that Black lives, but also Black livelihood, matters.”

Photography courtesy of Dr. Liza.
Get the best of FASHION in your inbox Thanks for signing up!
The latest fashion, beauty and celeb news delivered right to your email #FASHIONforall Now, check your inbox to complete your subscription
We won’t ever use your email address for anything else
Want even more FASHION? Follow us on social media.