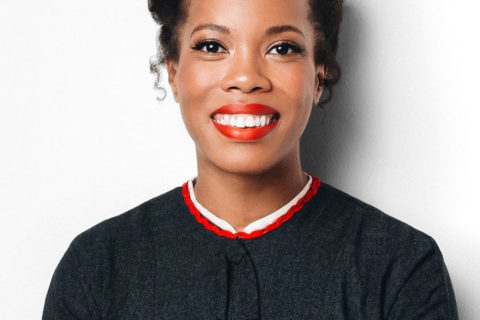 Kimberly Jenkins Talks About Relaunching The Fashion and Race Database

"The fashion industry wouldn’t be anywhere it is today without BIPOC culture."

When Kimberly Jenkins, assistant professor at Ryerson University’s School of Fashion in Toronto, first launched The Fashion and Race Database website in 2017, it was part of a pedagogy that she was crafting to foster a critical understanding of the cultural contexts that she felt were lacking in fashion education. Now, in the midst of an increasing demand for the work of BIPOC creatives and the cultural contributions of their communities to be recognized, the Database–which was relaunched last week–is poised to be a central resource in destabilizing and re-writing fashion’s historically white gaze. And the platform won’t just benefit fashion design students, but everyone from mass market brands to consumers in search of a deeper understanding of where the inspirations for our clothing and accessories really come from.

After graduating from Parsons School of Design’s innovative MA Fashion Studies program, Jenkins went on to teach, and it was the combination of these experiences that informed her decision to embark on the important journey she finds herself on today. “It provided the crucial foundation I needed in understanding the primary framework of fashion theory,” she says. “I thought, ok, how can we expand this now? It took having an understanding of that history in order to dismantle it, and broaden the narrative.”

The anticipation is mounting. I’m so excited to unveil the relaunch of the @fashionandracedatabase this Wednesday, July 8! ?? It’s been a month and a half of planning, working with a brilliant web developer, assembling a small team (and startling myself out of bed, having nightmares about Google Drive and web design elements ?). Well anyway, I hope you like it. Look out for my official launch posts here on IG this week! ? Visit fashionandrace.org in the meantime. Image: @fabiolajeanlouis

Previous to her studies, Jenkins’s foundational insight into the fashion industry came from glitzy accounts of backstage access and front row frivolity; she grew up watching shows like Canada’s own Fashion Television and MTV’s House of Style. “All that fashion journalism, and staying on the pulse, was really exciting to me,” Jenkins recalls. “I wanted to be in the fashion world somehow.” As she got older, though, her interests diversified into the fields of sociology, psychology and more–and it was difficult to understand how all those points could intersect for the burgeoning scholar.

“I just saw fashion through one lens,” she says. “I was enthralled by the glamour and creativity of it, and the way you can construct and present your identity in different ways through fashion. I definitely had a grasp of how [the industry] works in that way. But it was kind of limited. By the time I was in my late teens and early twenties, I had an interest in things outside of fashion, or what I thought was outside of fashion, like art, sociology, anthropology, psychology. And I thought they were mutually exclusive. It wasn’t until I found [the] Fashion Studies program at Parsons that I learned they go together. You can explore fashion through myriad ways–it’s connected to psychology and politics and race. It’s a prism that all these things are expressed through.”

After teaching for a few years, Jenkins proposed a new course to her alma mater, called ‘Fashion and Race’; it’s one facet of the educational approach she has worked tirelessly to develop since the course was accepted by Parsons in 2016.  And in combination with the merit of its other two components–the Database, and an exhibition called Fashion and Race: Deconstructing Ideas, Reconstructing Identities–Jenkins has found herself as one of the leading voices in fashion when it comes to uncovering the true origins of much-loved designs.

Today we are sharing our inaugural post for 'Objects That Matter,' the moccasin, researched by Adriana Hill. ⁣ ⁣ Photo: Pair of Puckered Moccasins, early 19th century. Eastern, Sioux. Courtesy of Brooklyn Museum.⁣ ⁣ This section of our website will feature numerous fashion objects, images and collections that have been under-researched or left out of fashion history books and museums, as well as objects designed with racist intent. The section gathers those items and provides a brief history, then shows why they matter, as many of these items have been widely appropriated or referenced.⁣ ⁣ Would you like to see this section grow through contributions from BIPOC voices? Consider donating to our fundraising campaign where funds will be matched up to $20k by Anna and John Mulaney! http://supportryerson.ca/fashionandrace⁣ ⁣ #fashionandracedatabase #fashionandrace

A post shared by The Fashion and Race Database (@fashionandracedatabase) on Jul 15, 2020 at 8:29am PDT

One of the most interesting things Jenkins has uncovered while working on updating the Database is that the “lame excuse” many in the fashion industry have used of not knowing where to find information about the accurate histories of fashion objects is really just that: An excuse. “My database says otherwise,” she says when it comes to the notion that there aren’t ample resources for those interested in discovering the authentic background of items like Moccasins, the recent subject of a post on the Database’s newly introduced ‘Objects That Matter’ pillar.

In addition to original content created for the site, visitors can obtain access to documents from books to academic papers, lectures, documentaries and more. Jenkins now works with a small but mighty team to create these stories and update its archive, and there’s a fundraising initiative now in place for the site, which was recently given an endorsement and donation match by makeup artist and designer Annamarie Tendler Mulaney and her husband, comedian John Mulaney.

What’s most obvious after looking through the Database’s mounting collection of tools is the undercurrent of hope that finally, the BIPOC originators behind the designs that fuel fashion’s lucrative businesses will get the hat tip they deserve. But Jenkins also finds herself in a position to ensure that moving forward, the same whitewashing and misguided decisions won’t be made by insiders in the future. In addition to her role at Ryerson, she’s acted as a consultant for major brands like Gucci, and she notes that while having someone like herself come in to educate teams about diversity is important, it’s not the way to facilitate lasting impact. “I’m not satisfied until I see structural changes,” she says, addressing the myriad brands who have clamoured to save face in light of the Black Lives Matter uprising by posting pictures of Black models on their social media.

I am so thankful that my work as an educator has helped to bridge the business of fashion, the creative work of visionary designers and academia. Today I gave a lecture on fashion studies and the intersections of fashion and race for Gucci, and had Alessandro Michele and Marco Bizzarri as dream “students”! Gucci has received its share of criticism, but I believe they are doing crucial work in embracing educators like myself, leading a change in luxury fashion. _______ #fashionstudies #fashionandrace #profkimj #gucci #fashioneducation #representationmatters #culturaldiversity #diversityandinclusion

She identifies this behaviour as “the illusion of inclusion” and says, “We’ve got to see more than the models. It takes more than just hiring an educator to deliver a workshop. This has to be long-term. A lot of these companies have made more than one mistake–that sends a message of internalized ignorance. [And] what’s most painful is how and why these things happen again and again. Sadly, for some of these brands–especially luxury brands–it’s because at the end of the day they just aren’t that worried about the Black consumer. They’re not convinced that they have enough power to necessitate structural changes.”

Jenkins does say, though, that she’s encouraged by the passion generated in the last several months, noting that she’s optimistic because, “People are interested in education now. People are listening.” And she urges emerging and existing BIPOC designers and artists to leverage this momentum. “Stand your ground,” she says. “Understand the value of your work, the beauty of your work, the brilliance of your work and protect it.”

When it comes to the talent making moves today, Jenkins cites New York-based designer Telfar Clemens and London-based stylist and editor Ibrahim Kamara as names to know. “There’s so many, I feel bad saying just one person,” she notes. Thanks to her work and a platform like The Fashion and Race Database, however, we’ll soon know of so many others.

Photography courtesy of Ryerson University.
Get the best of FASHION in your inbox Thanks for signing up!
The latest fashion, beauty and celeb news delivered right to your email #FASHIONforall Now, check your inbox to complete your subscription
We won’t ever use your email address for anything else
Want even more FASHION? Follow us on social media.