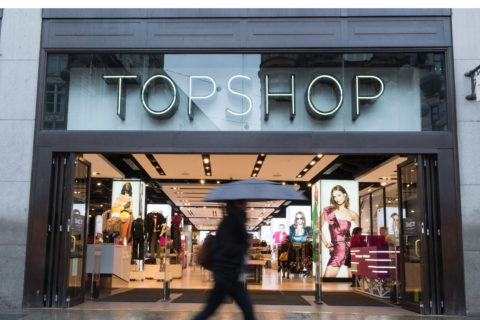 Topshop is in trouble, Kim Kardashian West has trademarked her fourth child's name and more.

Topshop Will Close All US Stores to Avoid Bankruptcy

After months of precipitous decline beginning with accusations of sexual assault levied against owner Sir Phillip Green in October 2018, Topshop has announced they will close all 11 Topshop and TopMan stores in the US. The flagging brand is shuttering an additional 12 stores in the UK, bringing the total up to 23 stores, which will put a total of 520 jobs in jeopardy. The drastic move is positioned as a “final effort” by the company to avoid bankruptcy. The Arcadia Group, which owns Topshop as well as other UK high street retailers like Miss Selfridge and Dorothy Perkins, has already closed 200 stores is the past three years. It is not clear whether or not this will affect Canada’s only Topshop, located within the Hudson’s Bay department store in Toronto. UPDATE: A representative from Hudson’s Bay has confirmed the news will not affect Topshop’s presence in Canada. (BBC)

What goes well with sunflowers? Our linen pinafore jumpsuit of course ? Tap to shop or shop via the ? in bio.

Giambattista Valli, designer of dreamy, tulle-drenched ball gowns, will be H&M’s next big designer collaboration. Though my initial reaction was one of scepticism – there’s no way Valli’s couture creations could be replicated at a lower price point, right? – it seems I’ve already been proved wrong thanks to Kendall Jenner debuting a massive fuchsia “mullet” dress at the amFAR gala at Cannes earlier this week. “This dress is everything – gorgeous, dramatic and fiercely feminine – and I can’t wait to see what the rest of the collection will be like,” Jenner said in a press release.  In addition to Jenner’s Barbie Dream Gown, another four dresses — all appropriately floofy — debuted at the Gala alongside Jenner worn by the like of Chiara Ferragni, Chris Lee (Li Yuchun), H.E.R., Bianca Brandolini d’Adda and Ross Lynch. All dresses seen at the gala will be available online at hm.com Saturday May 25th, while the larger collection will launch in-stores on November 7th. “I accepted this project because I felt it was the right moment to share my vision with a new audience. I want H&M customers to get access to the Valli dream and make whatever they want out of it. What I am offering them is a style, not fashion: something with a deeper meaning and a longer life,” the designer said in an interview with the brand. “There won’t be throwaway pieces in the collection, but items customers will want to keep in their wardrobes for a long time.” Fans of show stopping tiered ball gowns should start planning accordingly. (Press release)

It’s all flouncy frills and luxe layers when @giambattistavalliparis hits the red carpet with his gorgeous crew. All dressed in Giambattista Valli x H&M. #Project? On 25 May, we will release a pre-drop from @giambattistavalliparis x @hm with a limited edition of nine looks, as well as a few accessories, in selected stores and online. The main collection will launch on 7 November 2019.

At just two weeks old, Psalm West is already a mogul-in-training. The son of Kim Kardashian West and Kanye West, who was delivered via surrogate on May 9th (a Taurus!), is already the subject of a number of trademarks filed by his mother’s company, Kimsaprincess, for products as varied and baffling as children’s clothing, nutritional supplements, skin care, and glassware. Though strange, this bit of news isn’t unprecedented. Kardashian and West have already copyrighted the names of their three other children, North, Saint and Chicago. According to WWD, the move is a common way for celebrities to deter third-parties from starting businesses in their child’s name. (That would be, admittedly, weird.) Perhaps the most compelling tidbit of all is that Kim Kardashian actually named her company, Kimsaprincess, which sounds like the name 12-year-old girl would pick to name their business. (WWD)

Catalogs are Having a Comeback

Growing up, one of the things I’d look forward to the most around Christmastime was the Sears catalogue. Easily the size of a phone book (remember those?), there was no greater joy than flipping through the colour-coded pages and dreaming up elaborate, imaginary wishlists. (What can I say, I became a consumer VERY early on.) Naturally, I haven’t read a catalogue in years, but according to Business of Fashion, there has been a significant renewed interest in the medium. “I think digital communications are starting to overwhelm people, and a well-designed piece of print advertisement can be an unexpected touchpoint,” said Colin Nagy, head of strategy at creative agency FF New York, told Business of Fashion. Apparently, a brand called Naked Cashmere invested $125,000 into a creating a 36-page catalog, which led to sales of seven time the initial investment. Yowza. If brands are able to create a catalogue that’s both accessible and aspirational, it appears they have quite a bit to gain. Print really is the new digital. (Business of Fashion)