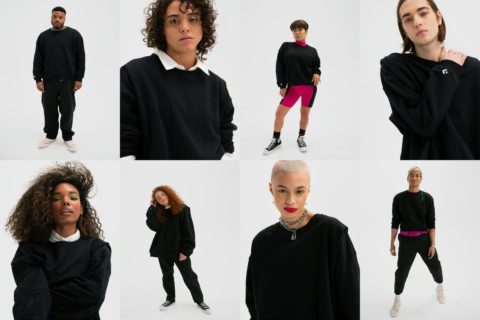 The New Converse Apparel Collection is Designed For Body Shapes, Not Genders

Footwear company Converse is expanding its offering today, announcing the launch of its first ever genderless clothing collection.

The line is called Converse Shapes and the collection has been designed for different body shapes versus specific genders. According to WWD, the debut collection “encompasses five pieces in four sizes with detailing such as gussets, pleats and elastic waistbands that can expand and collapse to fit a wide variety of consumers.” The inspiration for the collection was the brand’s own Chuck Taylor shoe – a globally recognized unisex shoe. The official release for the line also notes that “size is a reference point, not an identity.”

The first collection (there are three slated for this year) is due for release in the summer, and has been made using 50 per cent recycled cotton and 50 per cent virgin cotton. Plus, given the shape of the pieces, there is also less waste involved on the production side.

“Shapes is the perfect example of how to meet the consumer in their element,” Jonathan Tappan, the vice president and general manager of apparel and accessories for the brand said in a release. “By bringing functionality, inclusivity and comfort to everyday clothes, we believe we can really change the game.”

To fete the launch, the brand released a video on its YouTube channel featuring a variety of people talking about the importance of genderless clothing. Watch it below: