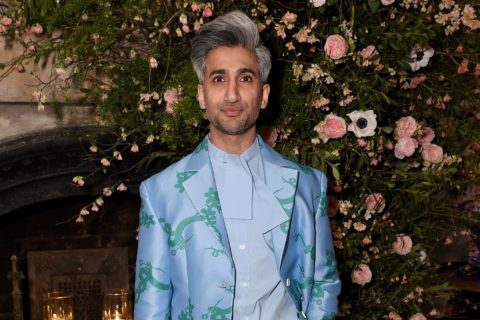 8 Quick Questions with Next in Fashion’s Tan France

And yes, he is 100 per cent as delightful as you think.

Last night, the style set gathered in New York for an intimate cocktail party to celebrate the winner of Netflix’s new fashion competition show, Next in Fashion. Note: if you don’t want spoilers, stop reading now and come back when you’re done!

In amongst the dancefloor revelry and displays of genuine friendship between many of the 18 contestants, we grabbed host Tan France for a round of quickfire questions based on each of the episode topics. Here’s what he had to say about Alexa Chung, double denim and the two items he’ll never wear.

I know it. It was Cate Blanchett, she was in Givenchy. She was at the Oscars, I think in 2011. It’s this lilac and chartreuse colour. Beautiful.

2. One print you would never wear?

I never say never when it comes to fashion other than Crocs or flip flops.

It was an Indian version of what we have as a suit, it’s called a sherwani suit. I wore it to the Primetime Emmys. It was custom, and I’ve never felt so beautiful. It’s so rare where I don’t consciously want to feel a certain way, everything I wear is a conscious effort. That one made me feel just magical.

4. In the lingerie episode, extended size models were featured. Why was it important to you that all sizes be featured in the show?

I think if you’re not considering having extended size ranges in a fashion competition show or in reality, that you are taking yourself out of the game of fashion, first and foremost, but also what is expected of our culture. We are getting to a place where we expect more diversity and I love that. I’m not surprised Netflix pushed for that, I would expect nothing else. I wouldn’t be part of a show that wasn’t diverse in as many ways as possible.

5. What’s a song that you listen to when you need a rock ‘n’ roll attitude?

I don’t listen to rock ‘n’ roll but it’s always Beyoncé. Right now it’s Freedom, it’s been that for a while. Or Formation, or Who Run The World? and I change it to gays.

6. Activewear for all occasions – yes or no?

No. I’m fine with activewear but I don’t need to see it all day everyday.

LOVE. I love it. There’s a scene where Alexa and I wear it at the start of the denim episode and we wore [the outfits] as a joke but we both got into them and we were like, ‘I’d wear this.’ I’ve worn mine since!

8. And finally, agreement or agreeance?

Agreeance! I know that they say that it’s not used as much any more – it is where I’m from! It’s still grammatically correct. Afterwards, when the show was coming out, Alexa was saying, ‘I feel so bad that I corrected you when you were right.’ Alexa and I have a beautiful relationship and she said, ‘It’s lovely to watch how you respond because it would be so easy for you to just say, ‘No, I’m right.’ But you just smiled and let me do it.’ That’s how we work, we always have each other’s back. I love her.

You could really tell there’s a genuine friendship between the two of you, too.

I love her. We’d only met once before the show at a party accidentally. Well, she thought accidentally but I went because I found out she was going to be there. Within a heartbeat, I knew I was going to love her. I’d been a fan of hers for years. She was a fan of mine – as soon as I walked in, she screamed really loudly and then she ducked down and said to her friend, ‘Do you think Tan heard me?’ and I was like, ‘Yes, I heard you’. Then she said, ‘Can we be friends?’ and I said, ‘Yes, please’. I was already attached to the show and we were looking for my co-host and I was like, ‘I love her, she’s the best.’

I have four castmates on Queer Eye and I love them, they’re like my family. We’re the luckiest people in the world and we always say, you don’t get this ever again. Like usually that’s not the way it works in TV or Hollywood so I can’t believe I’ve got it again [with Alexa]. I’m very lucky. I’d like to believe I’m the common denominator. I’m not a bitch, which really helps!