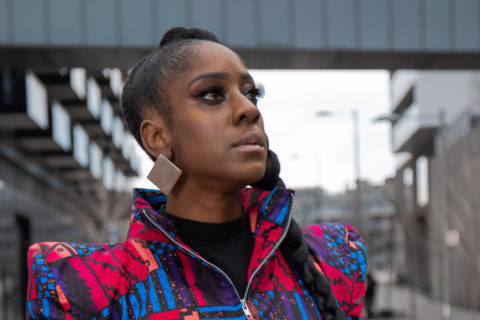 How Tabia Charles-Collins Went From Olympic Athlete to Fashion Designer

"I decided to start my own hustle, without knowing where it would take me or whether I would fail or succeed."

At a launch party for Anisah, the label Tabia Charles-Collins started in 2017, the Toronto native sported a bold teal jacket with exaggerated shoulder pads of her own design. It was the perfect compliment to her confident, bubbly personality that became more and more evident as she swiftly took me around the room, introducing me to her designs and gesticulating wildly about her love for high fashion, colour, and prints. The label name ‘Anisah’ derives from Charles-Collins’s middle name, Hasina, which she says means “beautiful and talented” in Swahili, Egyptian, and Arabic – it’s a fitting reflection of Charles-Collins and her new collection.

Though she’s every bit the stereotype of a delightfully eccentric designer, fashion wasn’t always Charles-Collins’s path. From 2007-2010, she was an Olympic track and field athlete who competed professionally for Team Canada and Nike. As a young child, Charles-Collins participated in almost every sport, from volleyball, basketball and soccer, to track and field. However, she excelled in track and field thanks to her speed. “Things then began to open up tremendously; I was internationally competing at a young age and, by the time I was in grade 10/11, schools started to talk to me about a scholarship. I was breaking records in Canada and so I thought, “oh, maybe I’m pretty good at this thing.”

After 20 offers from various schools, Charles-Collins chose to settle down at the University of Miami to complete her degree. “During this time I was able to become an NCAA champion in my last year and a 12 time All-American. This was when I decided I wanted to compete professionally,” she says. After numerous early mornings and long days of training, Charles-Collins ventured into her next huge milestone: the 2008 Beijing Summer Olympics. “I always say if there’s one point in my life that I would go back to and redo, it would be the Olympics. I think I took it for granted then, but it was amazing just walking into the bird’s nest with people chanting your name, and seeing yourself on the big screen.”

Finishing 10th in the final, Charles-Collins was ready to start training even harder in preparation for the London 2012 Olympics. “I was getting faster, I was getting stronger, things were amazing, but then I got injured. At practice, I was doing some drills and tore all the major ligaments from my ankle and fractured it.” At this point, Charles-Collins was ready to start training again but, as much as she pushed, her body couldn’t manage it. “It was a question of do I just keep doing this for years and years trying to get better? Or, do I take on a new journey?” Charles-Collins’s plan B took her back to school at University of Toronto and led her down a career path in Project Management. But, after being laid off 4 months into her maternity leave, and simultaneously realizing the corporate world wasn’t for her, Tabia had to rethink her future and come up with a plan C.

It wasn’t long before she realized that Plan C had been there all along: fashion. “I’ve always been a different type of athlete,” Charles-Collins says. She wore fishnet stockings when competing in her event at the Olympics, and always opted for cute dresses in lieu of athleisure when spending time in the Beijing Olympic village. “I didn’t just want to blend in with everybody else.” She had always dreamed of starting her own fashion line and finally decided to make her dreams a reality after being laid off during her mat leave in 2017. “I decided to start my own hustle, without knowing where it would take me or whether I would fail or succeed, I wanted to give myself an honest try and invest in my goals… I take that same discipline and ambition from my track and field career into my fashion.”

Charles-Collins takes inspiration from her roots, the confident women around her, and ‘boujee’ high fashion pieces. “My family is Caribbean, but of course our ancestors are African. There’s just so much beauty and richness in Africa and I wanted to bring that forth to everybody.” Charles-Collins’ goal is to make everyone feel confident in her pieces, no matter their background, and bring African prints into mainstream fashion in an authentic way. Charles-Collins designs for the rebellious woman who doesn’t follow the trends and is willing to step outside the box. “I want the women who wear these jackets to step into a room and feel as though all eyes are on her. I want women to express their identity and make a statement anywhere and everywhere they go.” Charles-Collins is all about making a statement with her pieces, going against the grain, and not caring about what others think.

At the end of the day, Charles-Collins feels grateful that she got to put this passion project into action with immense support from her friends and family. Most importantly, she wants her son D’Angelo, now one and a half years old, to see her do something great. “I want him to see me go after my passions, goals and dreams so then he will feel like he can do the same thing one day.” There’s no doubt Tabia Charles-Collins has been doing that her whole life.

PHOTOGRAPHY COURTESY OF Anisah
Get the best of FASHION in your inbox Thanks for signing up!
You’ll get the latest fashion, beauty and celeb news delivered right to your email Now, check your inbox to complete your subscription
We won’t ever use your email address for anything else
Want even more FASHION? Follow us on social media.