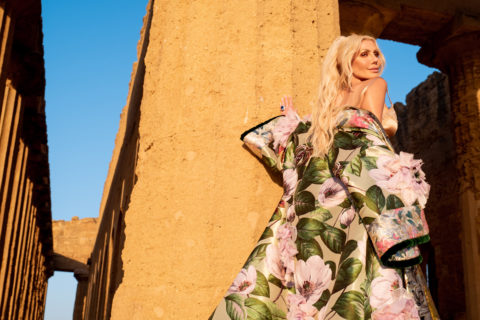 Life Lessons With One of Canada’s Most Prominent Fashion Philanthropists, Sylvia Mantella

"Say yes to everything that’s not illegal or immoral."

Utter the name ‘Sylvia Mantella’ and it’s almost like a dog whistle, perking up the ears of any Canadian fashion designer within a 50-mile radius. As the Chief Marketing Officer of the Mantella Corporation, the blonde-haired beauty is one of the biggest philanthropists in the country and one of her main causes is fashion; she considers her extensive wardrobe to be an investment in the future of Canadian fashion.

Though her jet-setting lifestyle may be far from average – on a recent trip to Milan she was treated to a private viewing of Leonardo Da Vinci’s Last Supper by Dolce & Gabbana – Mantella wasn’t always a profligate patron of fashion. Before marrying real estate development scion Robert Mantella in 2008, she was a marketing director at a telecom company and perhaps more importantly, a girl with a dream. These are life lessons, as told by Sylvia Mantella.

Such a privilege to stand on the steps in the legendary Valle Dei Templi in Sicily with Alta Moda This incredibly iconic structure has stood here for 3000 years. . .photocred @germanlarkin . . . . . . . . . . #DolceGabbana #Altamoda #sicily #Agrigento #italylove #valledeitempli

“I was an only child up until I was 16, so I really grew up alone, with a lot of animals. I didn’t have a lot of friends in my neighbourhood because I went to a school far away from where I lived, and so my animals were my friends, and my dolls.”

On her lifelong love of fashion

“I didn’t wake up with this kind of life. I mean, you build it. [In my youth] I was shopping at Le Chateau or Stitches or wherever I had to go. I was putting things together…They may not be thousand-dollar outfits, but they looked really good. I mean, if I had a hundred bucks I was gonna make that hundred dollars go really far.

“My parents sent me a private school that was far away. There were maybe ten people in my grade 8 class, it was really intimate. My kids are now in their early 20’s, but my husband and I chose to send them to The Country Day School [in King City] because it was up north again in that intimate setting. Also, they couldn’t skip class to go anywhere up there. The gas station isn’t worth skipping class for, so yeah.”

Earth Day… Im feeling it! Today is an event observed annually on April 22. Earth Day, 2019 is celebrated in more than 193 countries. It is a day held to demonstrate and promote environmental awareness and calls for the protection of our planet. . . .photocred @sachaspex . . . . . . . . #earthday #giraffemanor #giraffelove #bekind

On her career, pre-Mantella Corp

“After high school, I worked at Stitches. I was a merchandising manager. I worked there for about three years. Square One was one of my windows, and the Dufferin Mall. I loved the job, dressing up the windows and putting things on the walls. After stitches, my dad had an audio company, catering to audiophiles, so I worked there. I worked with my dad for a bit, three years. Then I moved to Bell Mobility. I applied for a job as a salesperson and within three months, they moved me into the marketing manager position. I was really successful with hitting my targets. I had a team of 30 people and every month we were just slamming our quotas. I stayed there for seven years.”

On putting her husband in the friend zone

“Robert and I met through mutual friends, and we were friends first. We were friends for three or four years, we’ve been together 17 years, and we’ve been married for 11. Shortly after we were married, he told me,  “I had a crush you from the day I met you” But he was in the friend zone, you know? But as we started spending more time together, we  realized we have so many interests; the love of animals was tremendous. We also have great respect for each other. We’re both tremendously busy, and have a lot of responsibilities. So we don’t resent the other person for doing what they need to do.”

Here at Ol Jogi with beautiful Alfie, a permanent resident at Ol Jogi in Kenya and she’s under 24 hour a day guard. . Please understand I am not here to preach my intent is to try to teach, if even just a little. . Alfie is blind therefore unable to fend for or protect herself. . . Without this level of protection her fate and that of the East African Balck Rhino is not looking positive. . . Rhino poaching is at crisis level. Due to decades of poaching for rhino horn, their population has declined nearly 98 percent since 1960’s At this rate there is little chance of our children ever seeing a rhino. . . The illegal rhino horn trade is run by organized crime syndicates throughout Vietnam and China. . The actual poachers are usually locals who are given a few hundred dollars in order to feed their families by killing these animals for their horn. . . The top levels in China sell the horn for up to $65,000 a kilogram. Rhino horn has become status symbol, a symbol of wealth. . Furthermore, Chinese medicine has given it multiple uses, such as cure to hangovers impotence or cancer, all scientifically proven to be false. . Rhino horn is chemically identical to your fingernails and hair. It is made up of keratin. The current situation we find ourselves in as humans is complex. . Last year the Chinese Government overturned their own 25 year ban on rhino horn and have now legalized domestic trade in rhino horn and tiger bone. . I don’t have the answers how to stop this, the only solace I can find is to support the efforts of incredible organizations such as the Grumeti Fund @grumetifund in Tanzania and Ol Jogi @oljogi in Kenya ? . . . ? @sachaspex . . . . . . . . . #rhino #stoprhinopoaching #rhinopoachingawareness #kenya #tanzania #africa #grumetifund #wildlifeconservation #oljogi #oljogirhinos

On having a blended family

“Our youngest, Conrad, is 21, our middle, Sarah, is 24, and then our oldest, Conrad, will be 27 in four months. We’re a blended family. Robert and I were both married before we came together, and we blended our family really beautifully. We don’t use words like stepson or stepdaughter. It’s mom, it’s dad, it’s brother, it’s sister.  So yeah, that’s my family in a nutshell.”

“Number one, never judge your life on a bad day, because nothing will seem right. My other piece of advice is say yes to everything that’s not illegal or immoral. I’ve done that in the past 4-5 years and my life has just gone from a five to a ten, in the best possible way.”

Photography by German Larkin
Get the best of FASHION in your inbox Thanks for signing up!
The latest fashion, beauty and celeb news delivered right to your email #FASHIONforall Now, check your inbox to complete your subscription
We won’t ever use your email address for anything else
Want even more FASHION? Follow us on social media.