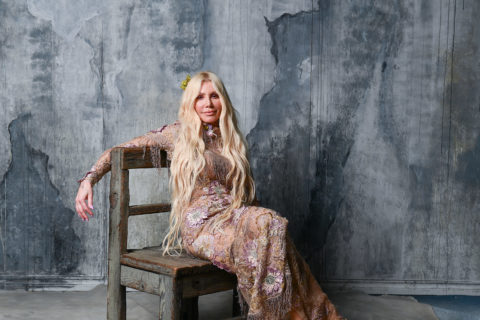 How Couture Queen Sylvia Mantella Gets Ready for The CAFA Awards

Her look, designed by Stephen Caras, resembled a cross between a wood nymph and Lady Godiva.

“In my vision, I wanted to feel like I was walking out of a forest,” Sylvia Mantella says of the slinky, Garden of Eden-inspired gown she wore to the 2019 CAFA Awards. Designed by Stephan Caras, the close-fitting, ecru lace number was covered in strategically-placed purple applique flowers, and made the Chief Marketing Officer of the Mantella Corporation (and one of Toronto’s most notable philanthropists) resemble a cross between a wood nymph and Lady Godiva.

The gown was the subject of a 3-month long collaboration between Mantella and the designer. “I’m surprised I haven’t given him a heart attack,” she says. Caras had initially designed a gown featuring a billowing skirt, but two weeks out from the event, Mantella had settled on the idea of wearing something…slinkier.  Thankfully, Caras was game. He estimates the dress, replete with over 3000 Swarovski crystals and hand-sewn floral appliques, represents over 100 hours of labour.

Mantella chose Caras to design the dress because she has the utmost trust in his vision. “I find that the designers that I am attracted to or engage with, there has to be some sort of a connection…He’s very open-minded and is able to take anything that I think of or envision to another level,” she says. According to Caras, “It is every designer’s dream to work with someone like Sylvia because she has so much confidence in the way she wears [your dress].”

Mantella, whose extensive wardrobe has been documented by The Coveteur, explains her love of fashion is akin to that of a collector. “I don’t collect art, I collect gowns. That’s my Picasso, you know? That’s my Renoir,” she says. Though Mantella declines to put a dollar value on the amount of money she’s invested in Canadian fashion this year, she describes herself as “fortunate” in her ability to support emerging designers. “If you can’t get behind the people believe in, well, why should anybody else?”

One the afternoon of the CAFAs, Mantella spent the afternoon in her year-round suite at the St. Regis Hotel getting glammed up with her team of makeup artist Patrick Rahme and hairstylist Kirsten Klontz. Though her makeup look was fairly simple, Rahme customized Mantella’s eyelashes by cutting up two different sets of falsies and layering them until the desired effect has been achieved.

If fashion is about the spirit of collaboration, then Mantella’s outfit was perhaps the ultimate testament to the talent, passion and energy of the Canadian fashion industry.