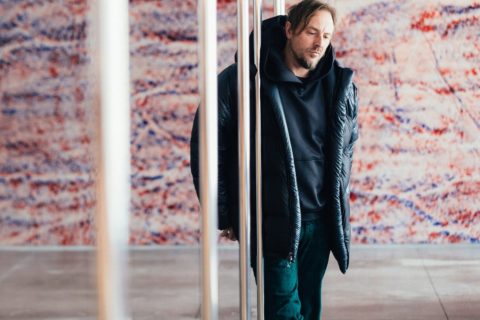 L.A. based artist Sterling Ruby, who pushes the boundaries of expression and social commentary through a myriad of mediums including ceramics and collage, announced the creation of a fashion line, of which the name is just as baffling as that of his frequent collaborator Raf Simons’ line at Calvin Klein, 205W39NYC. Titled S.R. STUDIO. LA. CA., the first collection will include both menswear and womenswear and launches at Pitti Uomo on June 13th.

Best known for his powerful installations, Ruby’s artwork leans toward the abstract. Pieces like BC (Bleach Collage) incorporate textiles to tell a multi-layered story of religious history and appreciation of cultural landscapes.

Ruby’s artistic collaboration with Raf Simons began in 2008, when he designed a store for Simons’ namesake brand in Tokyo.  Simons was impressed by the effortlessness of Ruby’s melding of art and fashion, stating in a conversation at the Harvard Graduate School of Design, “We were very interested in each other’s practices and maybe we had the desire to do things that people could not see us doing.”

Six years after their first interaction, Ruby’s name was stitched onto garments’ labels in Simons’ F/W 2014 collection, in which the aforementioned BC had a clear influence on the bleach-splattered, collage-like designs.

When Simons was appointed chief creative director of Calvin Klein in 2016, he assigned Ruby the task of turning the brand’s Madison Avenue flagship store into an exhibition-like space. In a very Ruby-esque manner, the store was transformed into a caution tape yellow, with pom poms, strips of red fabric, and even buckets hanging from the ceiling.

It will be exciting to see how Ruby translates his own solo style and design technique onto the runway when his collection is released this Spring.

If his collaboration with Simons says anything, it’s that his designs will closely mirror his existing artworks and processes with quilts, collage, and sculpture. One thing of which we can be certain is Ruby is extremely stoked about this new venture.  In a statement, he exclaimed, “For years I have been privately exploring garments as a medium, as something that impacts the way one can think, feel, and move. I couldn’t be more excited to finally put my clothing out into the world.”