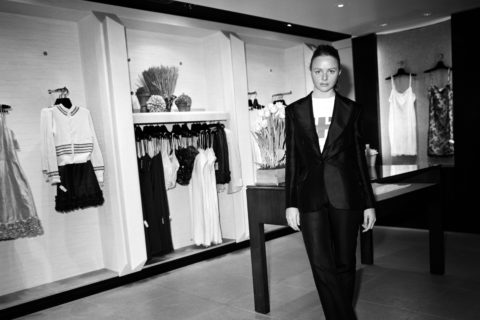 From the FASHION Archives: The Meteoric Rise of Stella McCartney from the September 2001 Issue

Stella McCartney takes the next step in her quest for superchickdom

Since its launch in 1977, FASHION magazine has been giving Canadian readers in-depth reports on the industry’s most influential figures and expert takes on the worlds of fashion, beauty and style. In this series, we explore the depths of our archive to bring you some of the best fashion features we’ve ever published. This story, originally titled “Stella’s New Groove” by Tim Blanks, was initially published in FASHION’s September 2001 issue.

If a multi-million dollar deal for backing from a global fashion conglomerate could possibly be construed as a return to one’s roots, then Stella McCartney’s the girl to prove it’s possible. Following her graduation from Central Saint Martins in 1995, she borrowed a little money from her parents and launched her own label from her basement flat just off Portobello Road, keeping it small, keeping it real. Now, following four years as designer for Chloé in Paris – four years which have seen her become one of the best-known designers in the world – it’s McCartney’s name on the label once more. This time, the financing is coming from Tom Ford and his Gucci Group, but she is still planning on keeping it small and real – for now at least.

That’s going to be tricky, given that McCartney’s Gucci-backed debut in Paris is probably the most eagerly awaited collection of the Spring 2002 season. It will be keenly scrutinized, doubly so because it’s both her solo gig and the first fruit of Gucci’s most high-profile joint venture to date. That’s a lot of reputation resting on one show.

Following her graduation from Central Saint Martins in 1995, she borrowed a little money from her parents and launched her own label from her basement flat just off Portobello Road, keeping it small, keeping it real.

But this kind of pressure followed McCartney around for most of her life. There was always a prevailing sense that she was part of a much bigger story: her father’s band, her parents’ love story, their place in history and all the other baggage that swirls around a living legend and his offspring. In such situations, the family name can be as much a curse as a blessing. As McCartney herself so memorably complained in January 1999: “I’m so sick of this ‘my parents’ thing. It’s not my fault. It’s been that way my whole life. When I would make a good drawing in primary school, it was because my dad was famous. Or if I got a part in a school play, it was because Dad was a Beatle. What do I do? Do I become a smackhead and live off my parents’ fortune or do I have my own life?”

Just what McCartney was up against was inadvertently made clear in March 1998, after her second collection for Chloé. The fashion industry isn’t exactly renowned for poignant moments, but the sight of Paul and Linda McCartney holding each other and singing along to The Beach Boys’ “God Only Knows” as their daughter took her bow undoubtedly counts as one. The reviews, however, were bad. They re-aired the accusations about family connections greasing wheels for McCartney, about her not being up to the job. Then, a few weeks later, Linda died from breast cancer. This double whammy – professional and private – would have knocked anyone less grounded for six. But for McCartney, it seems to have posed a challenge that her subsequent career has risen to meet.

In such situations, the family name can be as much a curse as a blessing.

First, she has done her mother proud. McCartney continues Linda’s activism as a patron of The Vegetarian Society, a member of PETA and a vehement anti-fur and anti-leather campaigner. “I will never do leather,” she insists. “Nothing dead ever walks through my door.” She recently had a go at British Airways for using leather seats in the first-class cabins, which betrays a pragmatic activist’s understanding of the fact that people listen when money talks.

And second, McCartney saw off the naysayers during her years at Chloé. The label’s sales doubled after she took over in 1997. Industry sources estimate profits grew to more than $35 million last year. It’s quite an achievement when you reflect on the expense and the specificity of the Chloé look while McCartney was in charge. Or maybe it’s not so surprising. She has said, “The one thing I have going for me is that I’m exactly the age bracket of the person who buys my clothes.” And there’s nothing like knowing your customer.

“The one thing I have going for me is that I’m exactly the age bracket of the person who buys my clothes.”

It certainly hasn’t hurt that and of course, Madonna, the rock chick de nos jours. She showed up at McCartney’s basement flat years ago, paid retail and became a firm friend and client. McCartney designed The Wedding Dress.

Add Gwyneth in her wannabe rock-chick mode and pop chick Britney and you’ve got a good cross-section of the spotlight-hogging, trend-setting clientele that will follow McCartney to her next gig. No wonder Tom Ford enthuses that “her clothes have an enormous appeal to women around the world” (Kate Hudson’s unfortunate Oscar outfit aside). McCartney has snared their affections with her signature combinations of modern and vintage, hard and soft, masculine and feminine. At Chloé, that could mean a severely tailored 30s-inspired suit worn with a wispy camisole top, or the leanest, meanest jeans paired with an air-brushed zodiac T-shirt, or flirty tea dresses and the raunchiest denim hot-pants on the same catwalk. What looked tacky to fuddy-duddy fashion observers would invariably turn out to be just what the rock chicks craved. Those diamanté-studded aviators? Couldn’t get enough of them! That “Keep Your Bananas Off My Melons” T-shirt? Gone in a flash! All because McCartney’s sense of cool was juiced up with a playful girlish sexuality that older and/or male designers couldn’t even dream of. Compare McCartney’s corsets from her last collection for Chloé to those of her new business partner Tom Ford. Where his were darkly fetishistic, vaguely threatening, hers were prettily beaded and beribboned, begging for boyfriends with nimble fingers. “I happen to think corsets are foxy,” she said at a panel discussion. “And they make your tits look great.”

The addendum is pure McCartney, blunt and inarguable. She deals with cynics in the same way. Like, for instance, the people who wondered how she could ally herself with a business as fur-and-leather-based as Gucci. What she did was offer an irresistible option in her last show. “All that fake fur,” gushed Liv Tyler. “And it feels so beautiful, so real – and it’s not. So many people are wearing real stuff that it’s really good for them to see it’s so easy to make it not real and look just as good.”

“I’d rather get out of this industry if that’s what it is going to be like and work in a vegetarian restaurant.”

Or, as McCartney puts it, she’s going to prove to Gucci there is a kinder, gentler way of doing things. As she told Women’s Wear Daily earlier this year, “I have a vision for the way I want a woman to dress, perhaps because I’m a woman and I know what I like to wear. So many people are forgetting about what women want to wear. It just seems like the industry is working for the industry now which is, like, yecchh! I’d rather get out of this industry if that’s what it is going to be like and work in a vegetarian restaurant.”

Photo by John Aquino/Penske Media/REX/Shutterstock
Get the best of FASHION in your inbox Thanks for signing up!
The latest fashion, beauty and celeb news delivered right to your email #FASHIONforall Now, check your inbox to complete your subscription
We won’t ever use your email address for anything else
Want even more FASHION? Follow us on social media.