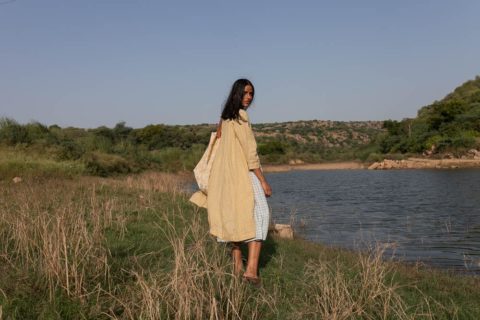 8 Contemporary South Asian Designers Who Are Redefining the Fashion Industry

When we think of South Asia in terms of fashion, we tend to associate it with the “Made in Bangladesh” tags on our GAP t-shirts, exploitation and oppression, or more traditional garb that evokes the “exotic.” Contemporary South Asian designers are often forgotten or ignored because they are incongruous with how fashion that hails from the Southern Hemisphere has come to be defined. In spite of this, the past few years have seen a rise in South Asian designers who create for a modern local and global audience, and whose work serves as an emblem for the culture.

More and more, contemporary South Asian designers are working to reclaim the South Asian identity and to create informed representation. Most of the designers listed operate their businesses with transparency, and adhere to ethical and sustainable practices in order to revitalize and give back to their communities. They also work to preserve traditional and local craftsmanship that has been disappearing due to international pressures for fast fashion.

From British-Bangladeshi newcomer Rahemur Rahman to Indian designer Rina Singh, who worked in design and development before launching her brand Eka, these South Asian designers are redefining not only the course of apparel and jewelry, but also what it means to be South Asian in this day and age.

British-Bangladeshi designer Rahemur Rahman presented his debut collection at London Fashion Week Men’s AW19 at the Kobi Nazrul Centre – a Bangladeshi community centre where Rahman also teaches – in London’s East End. Inclusivity of Bangladeshi culture and the broader South Asian diaspora in the mainstream is central to Rahman’s work, whose first collection married the richness of Bangladeshi textiles and dyeing techniques with traditional British tailoring. The collection was hued in earthy tones and joyous shades of blue and green, which were evocative of rootedness and the abundance of Bangladeshi culture.

Saskia Fernando, the founder and designer of the jewelry line Papillon du The, creates jewelry which commemorates traditional Sri Lankan jewelry and the local art of handcrafting jewelry, passed down from one generation to the next. Each of her unique pieces echo the island’s culture, and are crafted bearing in mind the energy of the wearer, incorporating the Japanese philosophy of wabi-sabi. Fernando is also an acclaimed gallerist, and runs the largest contemporary art gallery in Sri Lanka.

Rina Singh’s design house Eka is a celebration of the vast range of craftsmanship and textiles that span across India, from the revered jamdani of West Bengal to hand-woven wool from Himachal Pradesh. Singh’s fluid pieces maintain a kind of beauty and ease that caters to a wide market both at home and abroad, while reclaiming what it means to be a part of the Indian fashion industry, which is often associated with traditional and bridal wear. Upholding the vision of consciousness, Singh has cultivated a team of artisans to whom she attributes the success of Eka, and whose success she is mutually committed to.

Hung out with @uniqlo and shared some beading tricks. Photographed by @backyardbill who was the first ever, first ever photographer to ever show interest in working with me. 11 years ago when I was first visiting New York, Bill Gentle photographed me for his beautiful blog and then we worked together a few more times and to be able to continue working with him is such a pleasure because he’s really super nice and as his name suggests also very much a gentleman ?. Thank you @uniqlo for the studio visit. It was great working with the team.

Born and raised in Kathmandu, Nepal, NYC-based jewelry designer Arpana Rayamajhi creates pieces that meld her Nepali heritage with pop culture, as well as other ethnic and indigenous cultures around the world. Not one to shy away from colors and prints, Rayamajhi’s one-of-a-kind, handmade pieces are composed of vibrant colors and intricate designs that are reflective of her inspirations. Rayamajhi’s line was born out of the want for jewelry that mirrored her sensibilities, and she has since gone on to design jewelry for clients such as L’Oreal and Victoria’s Secret.

Based in Kabul, Afghanistan, Zarif was founded by Zoleykha Sherzad on the premise of presenting Afghanistan’s beautiful cultural heritage and creating local economic opportunities. The contemporary clothing is crafted using traditional fabrics sourced from across Afghanistan and Central Asia, and is often adorned with stunning embroidery work. Motivated by the ethos of slow production, Zarif employs local artisans who produce collections in accordance to fair-trade practices and use natural dyes.

What you wear should truly inspire you to be even more of yourself. Dress in a way to feel empowered, beautiful, sensual, feminine, and most importantly comfortable in your own skin. #haatichai

Established by designer Stella Simona in 2011, Haati Chai was born of Simona’s need for cultural connectedness and her close bond with her grandmother, Annie. Ranging from simplistic elegance to the ornate, Simona and her business partner Ali Heiss, design jewelry that speaks to the duality of Simona’s identity as a Bangladeshi-American woman. Haati Chai jewelry isn’t crafted for mass consumption, but rather as heirlooms in their timelessness.

Founded by the exceptionally talented Indian designer Ruchika Sachdeva, Bodice embodies the ethos of sustainability both in terms of design and through its business practices. A winner of the prestigious International Woolmark Prize and former Vivienne Westwood intern, Sachdeva is mindful of her environmental and ethical impact of production in fashion, sourcing a majority of her materials throughout India and employing artisans who are ethically treated and compensated. Sachdeva’s designs seamlessly blend contemporary-wear with her Indian roots, reimagining the realm of Indian fashion.

Zohra Rahman is a Lahore-based, Pakistani jewelry designer who launched her eponymous brand in 2014. Trained at Central Saint Martin’s, Rahman returned to Pakistan to create purism-inspired jewelry using traditional craftsmanship. Rahman’s museum-worthy pieces are handcrafted through an in-house apprenticeship program which operates to empower the local community, and to preserve and nourish the legacy of Lahore’s artisanal jewelry-making techniques