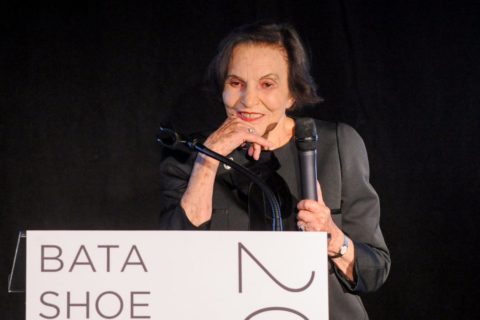 Sonja Bata fell head over heels for shoes in the while travelling the world in the 1940s and discovered her passion for collecting “rare and traditional” shoes. Since then, she built a collection of over 13,000 shoes, spanning over 4,500 years of footwear from all over the world. After collecting 10,000 pairs of shoes in her basement, she opened the Bata Shoe Museum, home to the world’s largest collection of shoes and footwear objects, on May 6th, 1995 at 327 Bloor Street West in downtown Toronto.

Whether it was French ‘chestnut crushing’ boots or or embroidered Chinese silk shoes, she found the rarest gems from almost every culture in the world. To Bata, shoes were more than just an accessory as she studied them to discover the culture, history and living habits behind each piece.

“Sonja Bata often called her collection of more than 13,000 shoes her children as she had handpicked each pair with love and care. A true collector who found great joy in the act of sharing her finds with others, she was particularly fond of the education and community-building role of her museum,” read a statement on the Bata Shoe Museum website.

Bata passed away at 91 on Tuesday evening after spending a week in the hospital. She’s left behind a legacy as a business leader and philanthropist.

Bata was born in Zurich, Switzerland in 1926. Although she had plans to pursue a career in architecture, her path changed when she married the to the heir of a global shoe manufacturing and retail empire, Thomas Bata. They travelled the world together and expanding the shoe business in Europe, Asia, Africa, North and South America, and Oceania.

“She also devoted her time to myriad organizations, including The National Design Council, World Wildlife Fund Canada, Council for Business and the Arts in Canada and Junior Achievement,” said a statement on the website.

“We will greatly miss her vision, her passion, her curiosity and her leadership,” they added.

Many have taken to twitter to mourn and remember her.

We’ve lost an extraordinary Canadian. My deepest condolences to the friends & family of Sonja Bata – business leader, philanthropist, and cultural force who shared her passion with Canada & the world.

Sonja Bata was a capable businesswoman, leader of a remarkable family and an extraordinary Torontonian. She lived a full life to the benefit of many others and she will be sadly missed.

We are saddened by the passing of Sonja Bata, an integral part of our organization since 1971, when she joined the international board of trustees. She remained a generous supporter who advanced our conservation work many times over. pic.twitter.com/4NFhlYst9S

A personal memory of the great Sonja Bata: I was reporting from a UNHCR tent school in Kandahar back in 2007 the day a surprise truckload of children’s shoes arrived. A brand new pair for every kid! Sonja’s donation brought pandemonium and pure joy. #RIP https://t.co/6wU8N9XgpL

So very saddened to learn of the passing of the incomparable Sonja Bata. Her beloved @batashoemuseum is a global cultural treasure, and Sonja herself was grace, dignity and charm personified. #RIPSonjaBata Canada has lost a cherished treasure. pic.twitter.com/wuoU4eZ1dT

photography courtesy of Bata Shoe Museum
Get the best of FASHION in your inbox Thanks for signing up!
The latest fashion, beauty and celeb news delivered right to your email #FASHIONforall Now, check your inbox to complete your subscription
We won’t ever use your email address for anything else
Want even more FASHION? Follow us on social media.