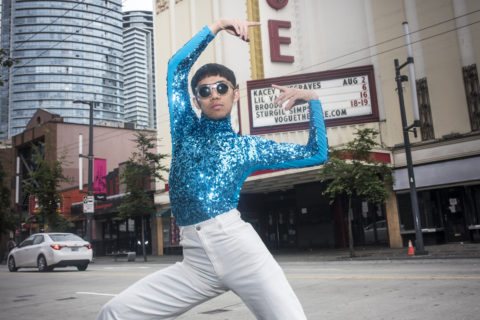 Tonight, FASHION held its virtual runway competition Slay The Runway II, a co-production with Karim Olen Ash and XPOSED and presented in association with Tide and Jean Paul Gaultier, in support of The 519. Moderated by Twysted Miyake-Mugler, the judges – Tamar Miyake-Mugler, supermodel and Canada’s Drag Race judge Stacey McKenzie and FASHION’s creative and fashion director George Antonopoulos – watched as 10 finalists (Diseiye, Ebony Xclusive Lanvin, Gala Siriano, Hannah Arsovskihan, Mars Alexander, Nick “Miami” Benz, Oleg Kasynets, Posh Gvasalia Lanvin, Roderic Monroe and Songbird Miyake-Mugler) presented their interpretation of #FreedomFabulousness and turned their living rooms, sidewalks, driveways and more into a fierce runway. Only one could be crowned as the winner – and Posh Gvasalia Lanvin came out on top, narrowly clinching the victory with an impressive 30/30 score after flooring the judges with his submission.

“His walk was incredible!” says Antonopoulos of the Vancouver-based winner. “From the moment he turned the corner and started giving us a ’90s-inspired Linda Evangelista supermodel walk, he owned every second of it. The look, which looked like it was straight off the Jacquemus S/S20 runway, and when he wrapped the massive hat around his body – that sold it for me. ” Tamar agrees, telling FASHION, “Posh Lanvin did what we like to call in ballroom ‘waking it up.’ He demanded our attention in a way many others did not. Just like I teach my house kids, you have to sell it from the moment you are seen stepping onto that runway. Posh not only finessed the limited space he had to work with, he also used his effect (a ballroom term for costume) to elevate the overall performance. It felt seasoned, confident and poised. Posh slayed the runway. The runway didn’t slay him.” McKenzie added, “Posh commanded the runway as soon as he stepped out. His walk was strong and confident with the right amount of playfulness, and his outfit was not only a great representation of his cultural background, it was very well thought out, fashionable and he knew how to work it.”

Speaking with FASHION about the inspiration behind his look, Posh said, “The theme of the runway challenge was ‘freedom’ – which is a word that I believe is quite sensitive during the current climate as society is re-evaluating our systemic racism. So my way of interpreting the theme was to celebrate my Philippine ancestry by featuring the Pina Barong (a traditional Filipino garment made with pineapple fibres) and Banig (a traditional floor mat) wrapped around my waist, and to literally ‘top’ it off  with a very large woven Jacquemus-style hat, that I actually purchased in Thailand.” He adds that he was “in shock” upon finding out he had won “knowing the talent of the community that entered.” As for how he’ll spend the $500 cash prize? “Even prior to winning, I was thinking about what I would do if I did win and promised myself that I would find a way to return the money back into the ballroom community. I will be giving half of my cash prize to The 519, as it was one of the first places where I was exposed to Ballroom when I lived in Toronto.”

Tide has generously donated to The 519, and is encouraging the Slay The Runway audience to do the same during our event by texting THE519 to 80100 or by clicking here.