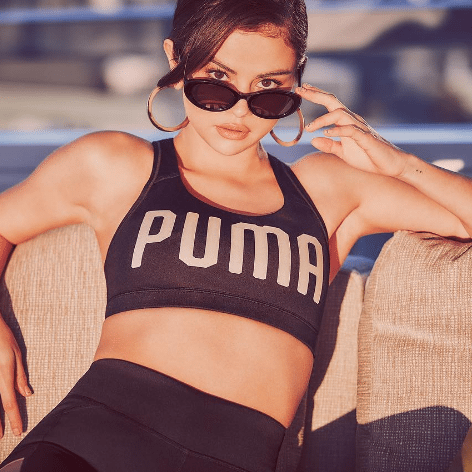 Selena Gomez is Officially Part of the Puma Family

Countdown to a Selena x The Weeknd campaign starts now.

Fresh off the heels of a successful Coach collaboration, Selena Gomez, queen of Instagram and the world’s most imperfectly perfect celebrity has officially pledged her allegiance to athletic brand, Puma, a.k.a. the brand her musician boyfriend, The Weeknd, is also largely associated with.

According to Puma, the 25-year-old pop star will not only be starring in campaigns for the brand, but will also be designing, just like her bf (real name Abel Tesfaye). Her first order of business? Starring in Puma’s newest campaign for the Phenom, an upcoming women’s footwear drop.

Fearless talent and ? of Instagram joins the family. @selenagomez #DoYou

“Being part of the PUMA family is very exciting for me,” the “Fetish” songstress said in a press release. “PUMA has changed the game when it comes to the mash-up of athletic wear and fashion. It’s amazing to see this influence on style and culture and I’m excited to be a part of it. I am hoping that we can create something special together. We already have some really cool projects in the works.”

Officially a part of the fam @puma #pumapartner

Just last month, Gomez and her Canadian crooner S.O. hinted at the partnership, with The Weeknd posting a pic of the two sporting the Puma XO ‘Parallel’ sneaker, which he designed.

And if that isn’t proof enough the two are wildly committed to each other, in an interview with Vogue, Gomez revealed she and Abel “share closets,” particularly his Puma gear.

“Sometimes I’ll throw on his Puma stuff and just go out with my shoes. I’ll wear that as a little cute date-night dress or something to the movies,” she said, adding that it’s hoodies they share the most.

Of course, the “Starboy” singer was quick to show his support for her lady on Instagram, reposting her campaign image on his Instagram stories, as well as showing some behind-the-scenes shots from the shoot.

We expect to see a joint campaign with this power couple very soon.