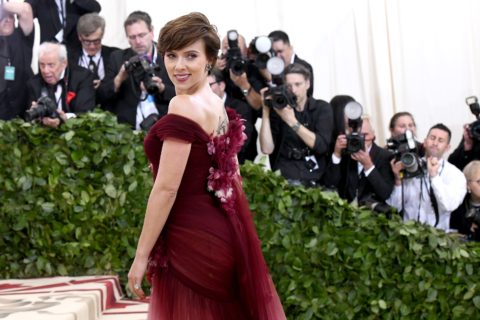 When Scarlett Johansson arrived hand-in-hand with boyfriend Colin Jost at the Met Gala Monday evening, her look paled in comparison to some of the “statement” outfits on the red carpet, such as Rihanna’s Pope-inspired getup and Lena Waithe’s rainbow cape—a self-proclaimed “epic moment of defiance” in support of LGBTQ+ rights.

At first glance, Johansson’s off-the-shoulder ombré gown, which transitioned perfectly from pink to red with a modest train, seemed a bit of a stretch when it came to the theme of the evening. Regardless, that dress has since turned into one of the most provocative pieces of the night. Any red-carpet junkie can recognize the frothy tulle for what it really is: Marchesa.

The label’s co-founder, Georgina Chapman, was married to now-disgraced producer Harvey Weinstein when a whopping 60 victims (which later turned to over 100) accused him of sexual assault, becoming the catalyst for the Time’s Up and #MeToo movements, as well as the key that opened the Pandora’s box of male predators within the industry. Once an awards show staple, Marchesa—which Weinstein allegedly bullied some actresses into wearing on the red carpet—was caught in the crossfire when it came to the falling of Chapman’s estranged husband. Their dresses became blacklisted by the Hollywood elite as a result.

Chapman announced her separation from Weinstein shortly after the scandal broke, and has been keeping a low profile since. Marchesa opted for a digital release of their fall/winter 2018 line instead of their usual presence at New York Fashion Week, and Chapman remained virtually unseen until this March when she surfaced for a board meeting with the Council of Fashion Designers of America. So when Scarlett Johansson became the first A-list celeb to wear the brand since the scandal erupted, people had mixed reactions.

Wow Scarlett Johansson…marchesa?? Are you serious? Such a thoughtless, problemtic person, lest we forget woody Allen is her favorite person to work with ??‍♀️

Scarlett Johansson (times up supporter) wears a Marchesa dress to the #METGALA18 , marking the first time a Marchesa Dress has been worn at a high profile event since the Weinstein scandal. Marchesa was heavily funded by Weinstein – the catalyst to the @TIMESUPNOW movement. ??

Scarlett Johansson wore Marchesa. #MetGala
That's pretty major of her and I hope it's the end of the icing out of the brand. Georgina Chapman and Keren Craig are NOT responsible for Harvey Weinstein. Stop punishing them.

Considering Johansson has played a pivotal role in the Time’s Up movement, critics are asking how she could wear a garment so inherently connected to the harassment scandal. Earlier this year, Johansson made a powerful speech at the LA Women’s March slyly calling out James Franco for his deceptive participation in the movement. “How could a person publicly stand by an organization that helps to provide support for victims of sexual assault while privately preying on people who have no power? I want my pin back, by the way,” she said.

When asked about her choice of dress, the actress made a statement to Variety  saying, “I wore Marchesa because their clothes make women feel confident and beautiful, and it is my pleasure to support a brand created by two incredibly talented and important female designers.” FASHION reached out to Marchesa for their response and is currently awaiting response.

If Catholicism preaches forgiveness and empathy, perhaps this dress is more on-theme than meets the eye. The dress marks an olive branch and potential forgiveness from Hollywood to Chapman and subsequently, her label. The idea that Johansson can use her place in the Time’s Up movement to represent forgiveness and mercy to the ex-wife of a disgraced man sure seems like something of biblical proportions.

Photography by Noam Galai/Getty
Get the best of FASHION in your inbox Thanks for signing up!
The latest fashion, beauty and celeb news delivered right to your email #FASHIONforall Now, check your inbox to complete your subscription
We won’t ever use your email address for anything else
Want even more FASHION? Follow us on social media.