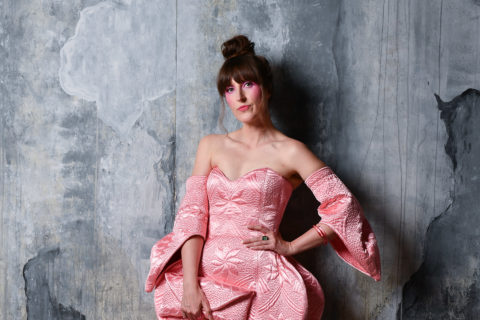 Fashion activist Sarah Jay discusses the makings of her CAFA dress, clothing as an investment and her definition of luxury.

We may not consider Value Village as a destination for red carpet glamour. Sarah Jay thought differently.

The Canadian sustainability activist and stylist (who guest edited our November 2018 issue!) initially struggled when deciding what to wear to the annual event that’s been dubbed “Canadian fashion prom.” (She was nominated in the Fashion Impact category.) But inspiration hit in the bedding section of Value Village during a routine treasure hunt when “Obsession” by Animotion — aka the theme song for Fashion Television — came on the speakers. At the same time, Jay’s eyes were drawn to a silky pink bedspread and sheer curtains. It was a sign.

“It was just a hilarious moment for me,” she laughs. “It honestly felt like the stars were aligning and having visions of Jeanne Bekker helped me to make a decision. I could have worn anything, I could have designed anything, but knew I wanted to make use of materials that already existed, rather than source new textiles.”

“Fashion is infinite. We are bombarded with options. How do we navigate from infinity?”  Jay says the combination of knowing what suits her body type, and the acknowledgment of the fashion industry’s harmful practices were her starting points for creating this look.

“We as North American send over 12 million tonnes of perfectly usable textile waste to landfill each year. Value Village is literally full of quality, fashionable finds. And when you look at things like bedspreads and sheets as starting points for your own design, anything is possible,” she says.

Sarah drew inspiration from the specific detailing found on the bedspread and the lace curtains, which she turned into flared pants. “I took a couple of cues from the pieces themselves; for example, there was a little peak and valley detail in the bedspread, which we ended up turning into the sweetheart neckline.”

Creating a dress isn’t a one-person job. Jay worked with the talented team of women at Tailoress, lead by Michelle Turpin, to create the upcycled look. “I have such an amazing relationship with Michelle. She trusts my instincts, I trust hers. She runs two businesses and had a baby on the breast throughout our process. Girl has the skills to bring any idea to life,” she says.

Jay preaches the importance of having a good tailor to ensure your wardrobe fits perfectly, stressing that clothing should be an “investment” rather than something you buy to wear once after you’ve snapped a pic for Instagram. She defines luxury for herself in terms of being able to collaborate with her friend on a unique, bespoke dress, rather then paying thousands of dollars for an off-the-rack designer brand that uses new materials and offshore labour.

It is rare to see upcycling done in the realm of formal wear, where most people purchase a dress specifically for one occasion. But Jay challenges the idea of wearing an outfit once. Although her CAFA outfit was distinctive, she designed it as separates, so she could break up the pieces and wear them again in different ways in the future.

Photography courtesy of George Pimentel
Get the best of FASHION in your inbox Thanks for signing up!
The latest fashion, beauty and celeb news delivered right to your email #FASHIONforall Now, check your inbox to complete your subscription
We won’t ever use your email address for anything else
Want even more FASHION? Follow us on social media.