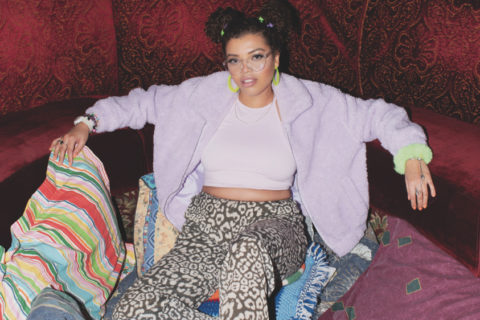 As DJ Me Time, she’s disrupting dancefloor culture in more ways than one.

Ask any introvert who’s been so carried away by a killer groove that she’s abandoned her inhibitions and busted a move in the middle of a crowded floor: At its core, dance music is about tapping into some sort of primal impulse. So it’s one of the great ironies of club culture that the tracks that spark maximum joy (and countless carpool karaoke sessions) for so many—that is, singalong pop songs— are considered kryptonite to DJs. “There’s a degree of seriousness that goes along with DJing in the dance-music community,” explains Sarah Barrable-Tishauer, a former Degrassi: The Next Generation star (fans will remember her as the fiercely ambitious Liberty Van Zandt) who performs under the name Me Time. “You don’t play music with lyrics, and you don’t play what’s popular.”

Much to the joy of the hundreds (maybe thousands) of revelers who’ve danced like no one’s watching while she’s behind the decks, Me Time has no time for such arbitrary rules. Make no mistake: The Toronto-based DJ takes her craft incredibly seriously. She just happens to also take seriously the belief that a dance floor should be a safe, supportive and positive space for everyone—regardless of gender, race, class…or musical proclivities. She ended an early-autumn set at Toronto’s Cherry Beach with the heart-surging strains of Cher’s Believe; during another recent gig, she gleefully dropped J.Lo’s Waiting for Tonight into the mix.

“These are the moments when people get to toss away their attitudes and belt from the top of their lungs,” she says. An astute observer might notice that these tracks happen to be smash hits by powerhouse women of the pre-millennial era. DJ Me Time, who came of age during the late 1990s and early 2000s, still has a soft spot for music from that period—and as a staunch believer of intersectional feminism (recognition of the ways different forms of marginalization, like racism, misogyny and homophobia, interact to create complex systems of oppression), she’s deeply attuned to amplifying feminized voices.

That impulse comes through loud and clear when you listen to the Spotify playlist she curated for LAT, a gorgeously wide-ranging assortment of tracks that DJ Me Time plays during her own “me time.” For her, each of these songs sparks one of four emotional responses: inspiration, appreciation, relaxation and amazement. Among her selections: A jazzy house revamp of 1960s soul siren Dusty Springfield; a down-tempo, self-love anthem by India.Arie; a reggae-tinged Nina Simone jam; a heart-stirring, head-nodding monologue about insecurity and inspiration by Toronto artist DaethePoet. As DJ Me Time explains, her decision to highlight these particular performers and producers stems from both a sense that they deserve to be listened to, and her own deep connection with their sounds and lived experiences. “This is representative of my belief that you can learn more about a person through music and dance than you can through words,” she says.

DJ Me Time’s investment in prioritizing women and non-binary folks is also reflected in the bodies who come out to see her perform: To paraphrase a recent post by a fan on a Facebook page for Harvest festival, an al fresco DJ and camping event held on the grounds of a castle-like home in southwestern Ontario, “You can guarantee at a Me Time show, the first three rows of people will be badass women killing it on the floor.” This is by both choice and design. It’s no secret that club culture is not typically the safest space for non-binary and trans folks or for women. As DJ Me Time explains, “From the time I started going out, it felt like it was just part of the drill that you were going to be harassed. It felt innate to this world—even now, even with the #MeToo movement, a lot of people still think that if you’re going to a bar, you’re there to be hit on.” While she’s acutely aware that on a big-picture level, no space is inherently safe—”We all have the capacity to harm and be harmed”— DJ Me Time is committed to taking charge of the ones she occupies.

Sometimes this is an ideological exercise; other times, it is a practical one. “When I play M.I.A.’s Bad Girls, I like to get on the mic and call all the bad girls to the front,” she says. “It’s my way of saying, ‘I see you!’ And I want to see you, from a safety perspective. If I saw someone in a situation that was clearly making them uncomfortable, I would not hesitate to call it out. My feeling is, hopefully if they’re at the front, they’re with a group of badass women who are also looking out for them.”

In the three years since she began DJing, Me Time’s rising profile has meant that she’s now able to more actively control the venues she plays and the people in those venues. She’s working to include others in that vibe of safety and liberation in a multitude of ways. Until recently, she managed the Safer Bars and Spaces program for the Dandelion Initiative, a survivor-run organization that aims to combat sexual violence in all workplaces. She moved on to focus on her own projects, including a monthly dance party EveryBody, where all bodies are welcomed and encouraged to move freely, and Bass Witch, a recurring event that honours feminine energy and performers. DJ Me Time is also connecting with people one on one, giving workshops and private lessons through her own School of Beats—an effort, as she puts it, to “make DJing more accessible, inclusive and fun.” This is how she is able to transform the experience of revelers, dancers and dreamers. As she explains, the power to bring your message to people is something she learned from her time on Degrassi.

“It was interesting to start out from a young age with a sense of the power of media,” she says. “I always respected that the show never strayed from really tough topics. Early on, I realized that fame for the sake of being famous wasn’t something I was interested in. I was terrified to see people around me skyrocketing, and how they lost control of their lives as a result. To me, being an influencer is about influencing people. I’m not going to tell you what shoes to buy or what food to eat. People message me to thank me for talking about the things I talk about, but honestly, what else would I use [the platform] for?” says DJ Me Time. “Sure, people like to see pretty pictures of you. I’ll do that, but it’ll be accompanied by a two-page comment about something that’s important to me.”

The above is a sneak preview from Latitude, a platform for women to connect, engage and share their stories. To find out more about Latitude, click here.