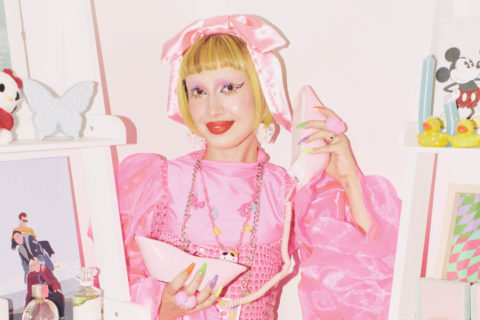 TikTok’s Sara Camposarcone is Dressing for Her Inner Child

With the help of her collection of novelty tights.

Call it childish, but Sara Camposarcone is dressing for her younger self. Hence her collection of 40+ novelty tights — the cherries on the top of an eclectic sartorial sundae that any kid would devour. It’s so playful that the content creator has inspired comparisons on social media to TV and movie characters. “I get [likened to] Ms. Frizzle from The Magic School Bus all the time,” she says from her home base in Hamilton, Ont. Other honourable mentions? Effie Trinket from The Hunger Games and (the most niche of them all) the babysitter from the 2003 film The Cat in the Hat. But Camposarcone takes these comparisons as a compliment. “If people relate me to any kind of character from their past, I think it’s pretty cool.”

Unlike her fictional counterparts, Sara Camposarcone shares her style secrets on the small screen. Although she has only been posting her looks on TikTok for about a year (her account @saracampz has since gained almost 500K followers), her love of fashion started at a very young age. “My grandmother has always had a big influence on me, and she’s a massive Marilyn Monroe fan,” she says, listing the 1950s actor as her early inspiration. “But I’ve always been a creative person. Growing up, I loved painting and making things, so now I’ve become my own canvas.”

And indeed she has. Sara Camposarcone classifies her style as “playful, colourful, bold and nostalgic” and cites Betsey Johnson, Marc Jacobs, John Galliano, Dame Vivienne Westwood and Iris Apfel as her current muses. So it makes sense that her wardrobe is a beautifully chaotic combination of all five. Campy clutches and boho bags are falling off a repurposed coat hanger. Crocs and cowboy boots intermingle on floor-to-ceiling shelves. And Barbie, Hello Kitty and Care Bear motifs are scattered across various garments hanging on rolling racks.

But the not-so-hidden gems in her closet are her patterned pantyhose, which she buys from vintage boutiques, thrift stores and independent designers she finds on Instagram. “I never want my tights to be hidden,” Camposarcone explains. “I want them to be the focal point.” And although “practicality” might not be the first word that comes to mind when you see Hello Kitty hosiery, she admits that wearing it means she can sport her summer shorts well into the winter.

What started with the purchase of puppy-print pantyhose by British brand Ashley Williams in the summer of 2021 has grown into a hoard of hosiery housed in multiple containers that Camposarcone tries her best to keep organized — the keyword being “tries.” “There’s a method to my madness,” she laughs. “I have a good memory of my stuff because I just love it all so much.”

That love is precisely what keeps Sara Camposarcone coming back for more, and she hopes that her insatiable enthusiasm for stylish maximalism encourages others to do the same. “I get a lot of comments on TikTok, like ‘I watch your videos because you and your style make me happy,’ and those kinds of notes make me want to cry,” she says, getting a little emotional. “Dressing up is literally my job, and it brings me so much joy — I’m living my dream.”

See some of the collection for yourself in the gallery below. 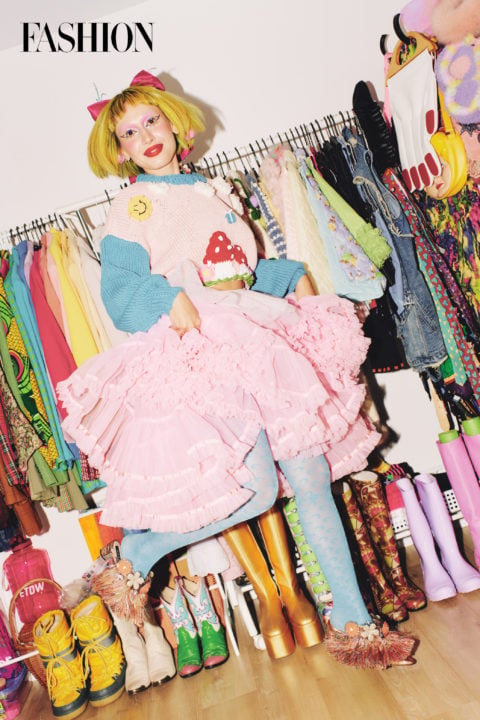 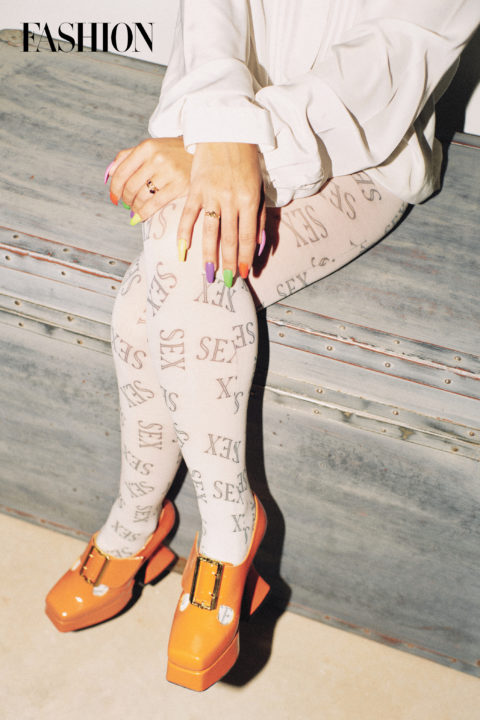 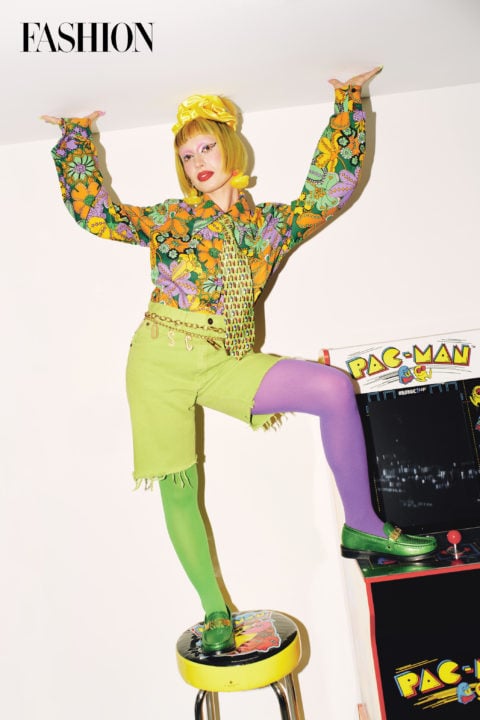 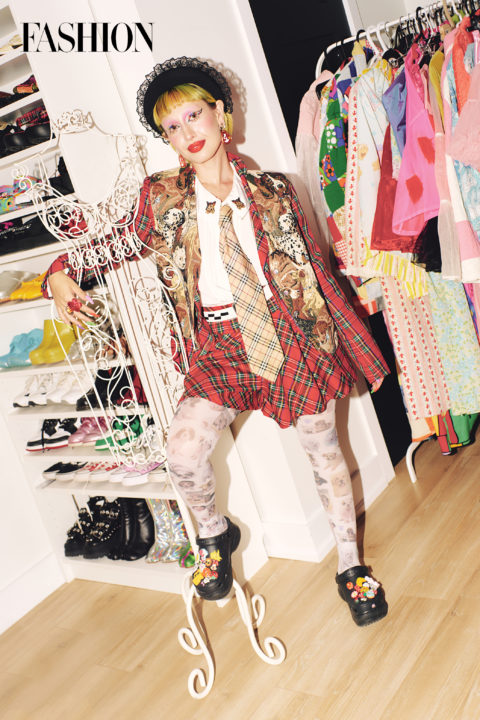 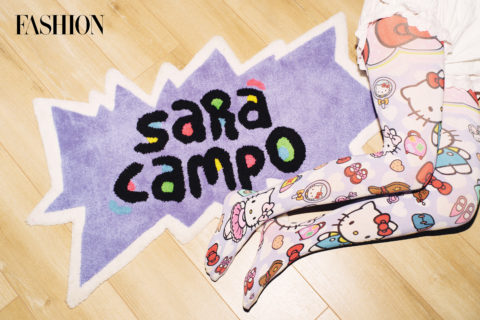 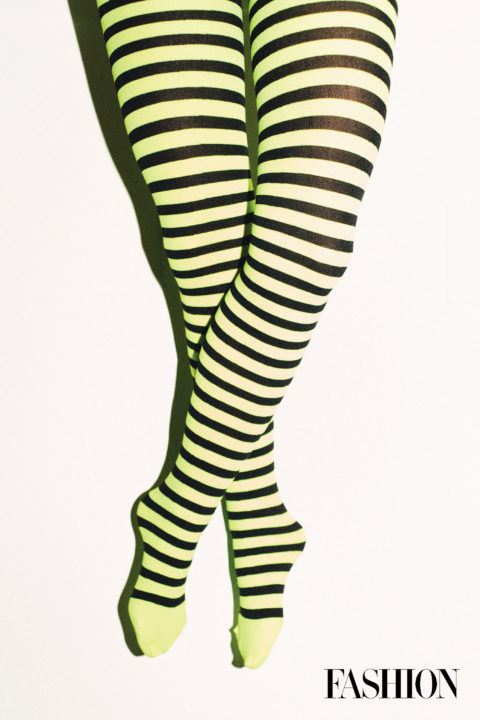 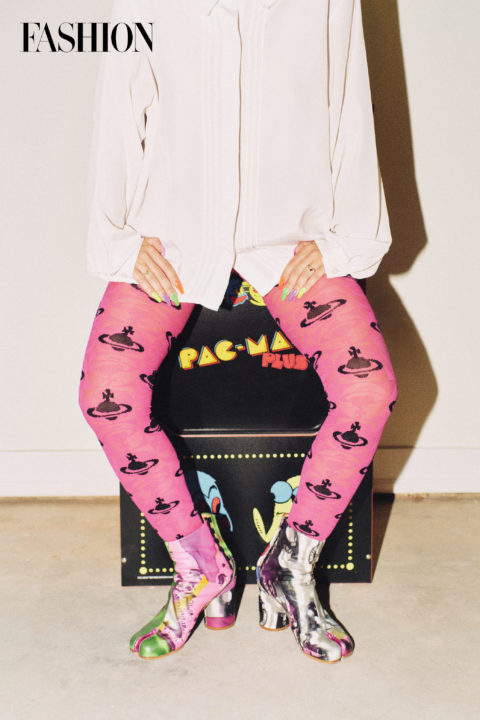 Only Camposarcone would describe these Marine Serre nylons as “subtle.” The sole blue pair in her collection, the designer tights had been on her wish list for a while before she finally found them on Farfetch.

Believe it or not, the collector almost wore these “Sex” tights by Ashley Williams to her big Italian family’s Christmas dinner. But before she got to her nonna’s house, her mom forced her to change — for obvious reasons.

“My favourite colour is probably a tie between green and pink,” admits the collector. But even though these tights from Depop are green and purple, she still loves a good matching moment and frequently pairs them with this patterned blouse and shorts.

These puppy pantyhose have been a staple in Camposarcone’s closet since she purchased them in 2021 and are to blame for starting her novelty-tights obsession. “I was like, ‘I need more of these right now,’” she laughs.

“One of my biggest inspirations is Japanese Harajuku style,” says Camposarcone of this pair of Hello Kitty hosiery by brand Irregular Choice. “It’s fun and kind of wild, but that’s what I love.

Camposarcone doesn’t limit herself to just one retailer; she sources her tights from multiple places, including vintage boutiques, independent online designers and Halloween stores, where she found this pair of greenand-black nylons.

Despite citing Vivienne Westwood as one of her fashion icons, Camposarcone says the colour was what initially drew her to these nylons. “I like that you can tell they’re Westwood because of the motif, but they’re also hot pink!”