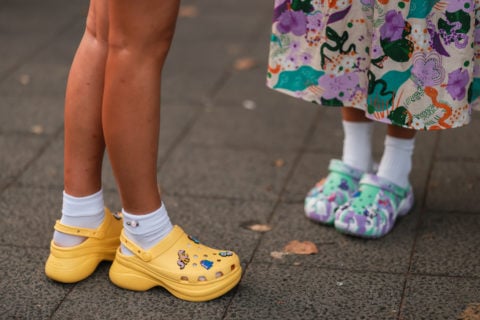 How to Style Crocs

Did anyone ever think we’d get here?

Crocs weren’t really on my radar until 2005. While I had obviously seen them around, I hadn’t quite grasped how popular they were until I descended the stairs one morning at a friend’s cottage and looked at the doorway. I saw not one, not two, but 12 pairs of the colourful clogs. Twelve! Everyone from the moms and dads to the tweens, teens and toddlers knew how to style crocs. It looked like we had robbed a Crocs store. But the cottage was where they were meant to be worn. It’s Crocs’ natural environment — not, I would argue, at fashion week. But in 2022, it appears I am wrong.

To keep it brief, Crocs are the shoes that people love to hate. Like Marmite or Kim Kardashian, almost everyone has a strong opinion one way or another. And it’s not like the platforms didn’t have their time in the sun. For nearly a decade, they were summer’s “it” shoe. But just as quickly as they rose to fame, they descended into darkness. Worse than darkness — they became an Internet meme.

But like most things nowadays, the pandemic brought about their resurgence. When you’re stuck at home, why wear heels when you can slip on a supportive sandal? Also, Balenciaga got the ball rolling in 2017 with its Crocs collab. And now they’re not just on the runways — celebrities and influencers have brought the Croc-aissance to the red carpet and the streets.

So, for anyone looking for a little 00’s nostalgia or just some cottage comfort, FASHION is here to help you learn how to style Crocs in 2022.

If you’re looking for a vanilla look, jeans and a white tee are about as vanilla as you’re going to get. But that’s not to say it’s wrong — quite the opposite. Think of Crocs as adding chocolate chips to an already creamy confection: they add additional flavour without being overpowering. Black Crocs are an easy intro into the world of clogs and look even better when paired with a vest, as seen here at Copenhagen Fashion Week.

To paraphrase Cher Horowitz from Clueless, these outfits are like full-on Monets. From far away, they’re gorgeous, but up close, they’re a little chaotic. But thankfully, this colourful chaos is just the look we’re going for. We recommend wearing your favourite patterned frock with a pair of matching platforms to give your summer wardrobe a little extra oomph. For bonus style points, white socks are sure to add a little prep to your step.

Normally you don’t think of Questlove as a budding fashion icon but today is the exception. In case you’ve forgotten (although we highly doubt it), the musician wore a pair of golden crocs to the 2022 Oscars. In short, he’s an icon, he’s a legend, and he is the moment! So instead of hiding your preference for the supportive slip-on, make them the star of the outfit, just like Quest and this stylish guest at Men’s Fashion Week.