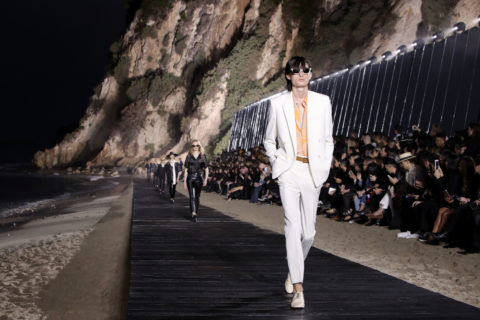 Anthony Vaccarello’s ‘70s rock-influenced S/S 2020 menswear collection for Saint Laurent took place on a placid beach in Malibu and featured glitter suits, skintight pants and plenty of men in eyeliner. It also, according to a recent report, violated a host of local environmental regulations in place to preserve the integrity of Malibu’s fragile beach ecosystem. Matt Meyerhoff, a spokesman for Malibu City Hall, told Vogue Business, “They built a boardwalk all the way across the beach. They shored it up with plastic sandbags, which are illegal in the city. People were outraged.” Apparently, local government had denied Saint Laurent an event permit to host their show at idyllic hidden beach Paradise Cove,  but decided to evade the decision by applying for a filming permit from a city contractor instead. Malibu also has a local “dark sky” ordinance banning bright lights in the evening so residents can see the stars and wildlife aren’t confused by artificial light, which Saint Lauren also ignored in favour erecting towering lights. Such controversy highlights the need for fashion brands to be accountable for the impact they have on local environments. (Vogue Business)

After parting ways with Kering in March 2018, Stella McCartney has entered into a partnership with the luxury conglomerate’s biggest rival, LVMH. According to WWD, “the goal of the partnership will be for the house of Stella McCartney to accelerate its worldwide development in terms of business and strategy, ‘while of course remaining faithful to its long-lasting commitment to sustainability and ethical fashion.’” McCartney’s brand has long been at the forefront of sustainability, offering organic cotton as early as 2005 and supporting environmental causes consistently through philanthropy; LVMH was one of the first large companies in France to instigate a sustainability department, over 25 years ago. LVMH CEO Bernard Arnault claimed to be “extremely happy” about the new partnership, and McCartney stated, “I look forward to a brilliant future together.” Congratulations to the happy couple! (WWD)

Stellabration✨More of the best moments from our #StellaSpring20 party in Milan, showcasing our bright and bold Women's Spring and Men's Spring Summer '20 collections. ⁣ ⁣ Photography by @wattsupphoto and @gabrielstokes

LVMH CEO Bernard Arnault has made almost $200 million dollars every single day this year. This astonishing figure – totalling $39 billion in wealth accumulation for 2019 alone — puts him right behind Amazon’s Jeff Bezos on the list of the world’s richest people, knocking Microsoft Bill Gates from his long-held number-two post. “Officials at LVMH declined to comment on the ranking, which fluctuates daily in tandem with stock market prices,” WWD reported. Just last year, LVMH overtook Total, an oil company, as the top-listed company on France’s stock market. This egregious level of income inequality is so. frankly, sickening, we won’t be surprised if the French Revolution 2.0 targets Arnault as opposed to Marie Antoinette. (WWD)

Mejuri’s worldwide takeover continues apace, as the millennial-friendly Canadian jewellery brand is set to open a new store on Melrose Avenue on August 10th. This is the first store the brand has opened since receiving $23 million in Series B funding, which it receives after garnering waitlists of over 70,000 people for a neutral-coloured jewellery travel case. Mejuri’s brick-and-mortar locations technically serve as showroom instead of stores. The store exist so customers can try on samples of the jewelry and anything they chose to purchase will be shipped out at a later date. “California has always been an important market for Mejuri and there’s nothing more valuable to us than meeting our community where they are,” CEO Noura Sakkijha told WWD. “The Los Angeles customer embraces our mission to make luxury an everyday habit, and we’re excited to bring Mejuri to the West Coast.” (WWD)

A statement sleeve + a golden stack? Leo season is upon us ? @koyanna

Photo by Matt Baron/Shutterstock
Get the best of FASHION in your inbox Thanks for signing up!
The latest fashion, beauty and celeb news delivered right to your email #FASHIONforall Now, check your inbox to complete your subscription
We won’t ever use your email address for anything else
Want even more FASHION? Follow us on social media.