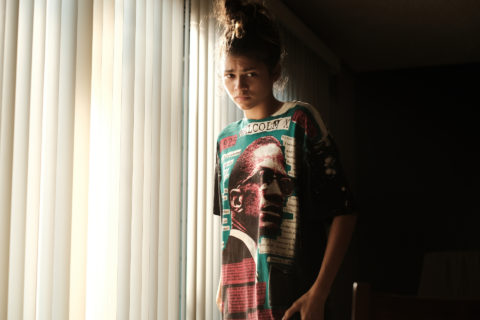 Fashion takes a backseat as Rue struggles with sobriety.

Euphoria is Gen Z’s headlining production, and Zendaya is its shining star.

The actor has continued to captivate viewers of the HBO drama (now in its second season) with her performance as Rue Bennett, a recovering drug addict. Rue is the series’ unreliable narrator, bringing levity as she takes viewers through the messy web of side plots in Euphoria.

As the leading character, fans of the show are most intimately familiar with Rue: she can be goofy and loveable one moment, and manipulative and cruel the next. She’s nuanced and complex, and her style is too. (Spoilers ahead!)

Unlike her teen peers in the hyper-glamourized Euphoria universe, Rue’s outfits are practical. Always paired with her high-top black Converse, she mainly wears hoodies, graphic oversized tees, basketball shorts or cargo pants, and has an affinity for layering to create her signature baggy look. The most important part of Rue’s wardrobe is, of course, the maroon hoodie that belonged to her late father (but more on that later).

Her skater-reminiscent wardrobe often features streetwear brands like Online Ceramics, Aries and Andrew. Oversized, messy and perfectly androgynous, Rue’s style also represents the fluidity of her gender identity and sexuality. In some ways, her understated fashion conveys her wish for anonymity, especially when she relapses.

From the start, Euphoria costume designer Heidi Bivens styled Rue as less striking than her peers; she isn’t as ostentatious as Maddy Perez (Alexa Demie) or as creative as Jules Vaughn (Hunter Schafer). But Rue’s wardrobe is not lacking in symbolism. This is Euphoria, after all.

At the end of season one, it’s revealed that the maroon hoodie Rue wears in nearly every episode belonged to her dad, who died when she was 14. The hoodie is intrinsically tied to her father’s presence — he’s even wearing it in the flashback scene where she describes her own birth.

The sweater is her greatest comfort, but it’s also a symbol of her emotional trauma, reminding viewers that Rue’s struggle with addiction is fueled by her grief for her father. When she relapses at the end of season one, she begins hallucinating that she’s being lifted up by a crowd of people all cloaked in the same maroon colour. The garment’s presence (or lack thereof) in the show is intentional.

Season two takes Rue down her darkest path yet. Starting in episode one, she’s trying to hide the fact that she’s using drugs again — lying to her mom Leslie (Nika King), her sister Gia (Storm Reid) and her girlfriend Jules. Her addiction leads her to enter an agreement with soft-spoken-yet-terrifying drug dealer Laurie (Martha Kelly), who gives her a suitcase filled with $10,000 worth of drugs to sell.

Rue’s chaotic storyline comes to a head in episode five, when she launches into a violent breakdown after her mom discovers she’s using again and hides the suitcase. She spirals, lashes out at those closest to her and attempts to physically escape the looming reality of rehab by…running in front of moving traffic, hiding in trash cans and even burglarizing a house.

The episode is a clear unraveling of Rue. In her moments of desperation, we see the hoodie re-emerge. At the end of the episode, she has a drug-induced flashback of when she spoke at her dad’s funeral while wearing the sweater.

It becomes harder to root for her as she pushes everyone who loves her away. But in episode six, which premiered on February 13, we see Rue begin to fix her mistakes, including apologizing to her sponsor, Ali (Colman Domingo).

Three episodes earlier, as she was leaving a Narcotics Anonymous meeting, the two had a fight when Rue crossed a line with Ali, who told her he was “done” and left her and her suitcase on the steps of the building alone. In the latest episode, she expressed regret for reducing someone’s life to the worst thing they’ve ever done. It’s a metaphor for where she’s at in her own life, after burning nearly every relationship bridge. Will her loved ones forgive her, or has she gone too far?

This season, Bivens wanted Rue’s wardrobe to reflect her sombre storyline. “I didn’t want to do any bright colours or fashionable trendy looks for her because of the seriousness of what she was going through,” she said in a recent interview. Bivens added that she pivoted away from the playful colours and patterns of last season — like Rue’s Hawaiian overshirt — to signify the severity of her actions.

When Rue is sober in season one, she experiments with makeup and fashion, thanks in part to Jules’s influence. In the season one finale, the ever-fashionable Jules calls out Rue for her laid-back style. “The fact that you usually dress like Seth Rogen — although you make it cute sometimes — like, it crushes my soul,” she remarks, ultimately pushing Rue to dress up for their school’s formal. But this season, she retracts, eschewing makeup entirely and no longer playing around with fashion as addiction takes centre-stage and she alienates Jules.

Along with wearing darker tones in season two of Euphoria, Rue distances herself from her dad’s hoodie and all it represents. Bivens told V Magazine that originally, she had Rue wear the hoodie less often this season to give the audience a break, but that its absence is representative of Rue’s downfall.

“Rue’s really becoming borderline diabolical with how she’s deceiving her friends and family,” Bivens said, referencing how last season, Rue wore the hoodie when she was sober and “on a good track.” In season two, she doesn’t wear the hoodie as much, particularly in moments where she’s being cruel — like gaslighting her sister and yelling at her mom.

“To me, instinctively, it just didn’t make sense to have this hoodie be with her every step of the way. It’s a reminder of her father and a reminder of someone who loves her,” Bivens continued. “So it’s like the sense of conscience which she’s trying to block out.”

After hitting rock bottom, episode six of Euphoria ends with a sliver of normalcy for Rue. Notably wearing her maroon hoodie, she’s having dinner with her mom, her sister and her sponsor. Despite going through withdrawal, we see her begin, ever so slightly, to mend broken relationships.

According to Zendaya, things will get better for Rue. ​​“Episode eight is where we’ll get that sense of redemption,” she told The Cut. “That you aren’t the worst thing you’ve ever done in your life. I think Rue deserves it, and I think anyone who suffers with the same thing she does deserves it.”

As Rue struggles on a path to recovery in Euphoria, her quiet style journey is poignant.