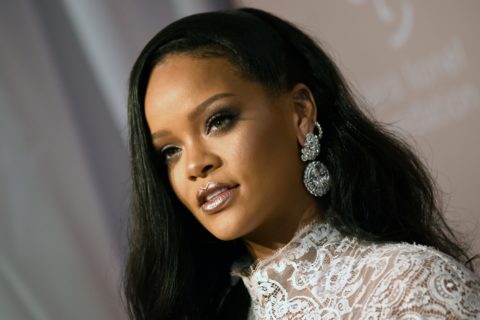 ’90s supermodel Kate Moss is back in front of the camera – this time with French label Zadig & Voltaire. Not only is Moss is the face of the brand’s F/W20 campaign, she has also designed a line of handbags for the collection, aptly called ‘Kate’. According to FashionNetwork, the collection has a rock’n’roll vibe and includes four styles in a variety of colours and sizes. The bags will go on sale in the brand’s stores worldwide from October, and in Paris’ Bon Marché Rive Gauche department store from now.

On Wednesday of this week, Rihanna launched the second drop of items from her LVMH-back clothing label, FENTY. The new collection, called 9-18, features cotton jersey “transformed into a source of sophistication, freedom and surprise” which, when matched with satin, elevates “its casual tradition.” Plus, the collection sees the debut of the Corset Boot in jersey and rubber, plus the sophisticated Date Night pumps and plenty of pearl accessories. RiRi’s signature Centerfold Glasses have also been reimagined in jet black for the new drop.

Tomorrow. Release 8-19. Only at FENTY.com

H&M-owned retailer COS announced the launch of a new collection this week with a focus on sustainability. According to release, the Restore Collection is made using “former unsellable clothing that [has] been mended and brought back to the assortment,” reports FashionNetwork. Laura Coppen, the Circular/Sustainable Business Development head at The Laboratory, who worked with COS on the collection, said, “We have a big responsibility with the scale and impact we currently have on the environment and this test is one example of many where we are exploring new solutions. It is essential we ideate new solutions for a lower impact on our environment whilst offering customers quality, beautiful products that last.” The collection will be available from September 4 in COS’ Berlin, Stockholm and Utrecht branches.

With the 2019 edition of Toronto Fashion Week (TFW) just days away from beginning, Yorkville Village and TFW have announced the launch of a new video series, called Window Wars. The webisodes will see Canadian/German director Tatjana Green and Toronto-based set stylist and creative director Krystin Leigh Smith go head-to-head to create window displays featuring designers showcasing during TFW. According to a release, the challenge will draw together art, fashion and film and will see Smith and Green “create set pieces from iconic movie scenes in captivating ways.” You can check out the works at 92 Yorkville Ave from September 5-October 23. The Window Wars series will air on torontofashionweek.to from September 19 and Canadians can vote for the winner, who will be announced on October 23.

Photo by Kristin Callahan/ACE Pictures/Shutterstock
Get the best of FASHION in your inbox Thanks for signing up!
The latest fashion, beauty and celeb news delivered right to your email #FASHIONforall Now, check your inbox to complete your subscription
We won’t ever use your email address for anything else
Want even more FASHION? Follow us on social media.