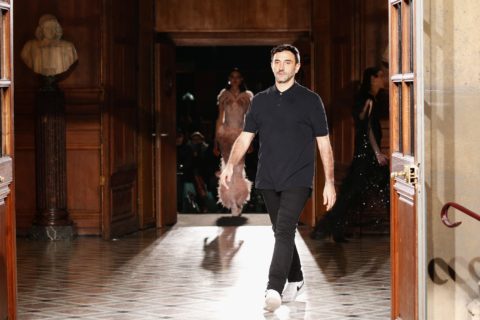 Will Riccardo Tisci Redefine the Trench Coat at Burberry?

The former Givenchy designer will begin his responsibilities as head designer of Burberry on March 12th.

When Christopher Bailey announced his departure, the fashion community was abuzz with rumours of who would succeed him. Would it be Phoebe Philo from Celine? Or perhaps Kim Jones of Louis Vuitton?

Bailey, who had previously designed for Donna Karan and Gucci, joined Burberry in 2001 and was tasked with modernizing the stuffy British label. His rock’n’roll sensibility added a hard, gleaming edge to the Burberry, hurtling the purveyor of classic trench coats into the 21st century. Under Bailey’s direction, the label launched the Burberry Acoustic series, tapped bad-girl supermodel Kate Moss to star in ad campaigns, and most recently, subverted the classic check with a row of rainbow stripes as an “emblem for optimism and inclusiveness” in support of LGBTQ charities. Bailey left without any indication of where he would be heading next.

Today we reveal #TheRainbowcheck and announce that #Burberry is supporting three LGBTQ+ charities, @AlbertKennedyTrust, @ILGAWorld and @TrevorProject, dedicated to broadening support for this community around the world. The rainbow, a symbol of inclusiveness and joy, is celebrated throughout the February 2018 collection . ‘My final collection here at Burberry is dedicated to and in support of – some of the best and brightest organisations supporting LGBTQ+ youth around the world. There has never been a more important time to say that in our diversity lies our strength, and our creativity.’ Christopher Bailey . #BurberryShow #LFW

Enter Riccardo Tisci, the 43-year-old Italian superstar designer who has been announced as Bailey’s successor. Tisci spent the last thirteen years creating dark, spellbinding couture magic at Givenchy. Tisci was responsible for outfitting Rihanna in thigh high boots and military flourishes for her 2013 Diamonds World Tour and perhaps, most memorably, dressing Kanye West in a leather skirt circa 2012. In a conversation with Donatella Versace for Interview, he once said, “I hate vulgarity even though it attracts me—and it attracts me very much. I love all that is transgressive or vulgar.”

Tisci’s darkly bewitching sensibility signals the arrival of a new era for Burberry. Prim but sexy, sharp but sheer, Tisci’s designs are always infused with an alluring, almost vampiric sensuality. They’re the perfect clothes for Eva Green, the raven-haired French actress whose red carpet style veers toward the gothic end of the spectrum, or Jamie Bochert the sunken-cheeked model who defines skeleton chic. Tisci has referred to his muses as Mariacarla Boscono, Carine Roitfeld, Marina Abramovic – independent, strong-willed brunettes – yet it’s worth noting, all white women.

Christopher Bailey used his rock’n’roll sense of fun to attract a younger audience to Burberry, but Tisci’s moody sensibilities will elevate the audience, and shift the appeal of the brand from Coachella to couture. One can’t help but imagine a belted trench coat transformed into a flowing, ruffled gown.

“Riccardo is one of the most talented designers of our time. His designs have an elegance that is contemporary and his skill in blending streetwear with high fashion is highly relevant to today’s luxury consumer,” Marco Gobetti, Burberry’s chief executive, said in a statement. “Riccardo’s creative vision will reinforce the ambitions we have for Burberry and position the brand firmly in luxury.” Tisci added, “I have an enormous respect for Burberry’s British heritage and global appeal and I am excited about the potential of this exceptional brand.”

The hire speaks to Gobetti’s plan to elevate Burberry’s position in the marketplace from purveyor of plaid wellies to luxury behemoth, which Gobetti has described as “the most enduring and rewarding part of the industry.” It’s also the most lucrative. Burberry’s sales have reportedly been flagging since 2016 and their jump into the luxury market will likely result in a significant price hike that will hopefully translate into the profit margin.

What Tisci brought to Givenchy has been compared to what Tom Ford brought to Gucci or Hedi Slimane at Dior – a bold sensibility that resulted in a total revitalization of the band from a creative and a financial standpoint. Tisci will begin his post on March 12th based at Burberry’s headquarters in London.

While most press has characterized Tisci’s entrance at Burberry as a shocking move, akin to Hedi Slimane taking over at Celine, I happen to think that Tisci’s gothic glamour will go over quite well at Burberry. Bailey set the stage for Burberry’s entrance into a high-gloss, music-focused aesthetic and Tisci will take the designs to the next level, ensuring Burberry isn’t just a covetable brand, but a necessary one.

In any event, he’s already got the entire world watching.

Photography by Estrop/Getty Images
Get the best of FASHION in your inbox Thanks for signing up!
The latest fashion, beauty and celeb news delivered right to your email #FASHIONforall Now, check your inbox to complete your subscription
We won’t ever use your email address for anything else
Want even more FASHION? Follow us on social media.