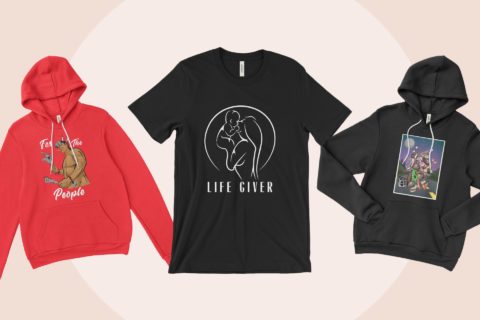 “I got involved in the criminal justice system early on,” says Rayland, who is an ex-gang member. “I got out a few years ago and decided I really wanted to change my life.” His attention shifted toward getting sober, gaining an education and giving back in as many ways as possible. He’s currently enrolled in a Social Innovation and Community Development program, and he is also a Housing Support Worker and Oshkaabaywis (helper) for a local elder.

Given his various ambitions, it’s unsurprising that Rayland also felt a desire to give a wearable platform to Indigeneity – one that speaks its spectrum from political to tender, healing to hopeful. “Growing up, there were no alternatives or role models,” Rayland recalls of his youth spent as part of Winnipeg’s marginalized Indigenous community.

“My role models were unfortunately criminals, but they didn’t know their behaviour stems from hurt,” he adds. “You can look at intergenerational trauma – their behaviour was a reaction to dealing with that.” Rayland committed to investigating and learning about his culture and identity, unpacking historical suffering and coming to the conclusion that “I was oppressing my own community through my own pain. I needed to do something positive.”

He looked to online platforms like YouTube and Shopify to gain insight into how he could pursue an impactful endeavour in the streetwear space, and from there, Red Rebel Armour was born. The ethos of the brand stems from three directives: to increase prosocial behaviour; to reduce the incarceration rate for Indigenous youth; and to advocate for Truth and Reconciliation Calls to Action for Justice #25 – 42.

Rayland produces Red Rebel Armour’s pieces in smalls batches using Oeko-Tex Standard 100 certified materials (sometimes with the help of his kids), noting that he’ll soon be moving to a studio space in the Social Enterprise Centre in Winnipeg’s North End. Ojibway artist Kale Bonham, the brand’s Creative Director, brings a mix of graphics to life on its assortment of t-shirts and hoodies. Sometimes the messaging is deeply activism-centric, like its sold-out style created to honour Missing and Murdered Indigenous Women and Girls. Other pieces boast illustrations of traditional medicines, and images rendering important cultural figures like the Sabe (sasquatch), which is linked to the Anishinaabe’s Seven Teachings of love, respect, courage, humility, truth, honesty and wisdom.

It’s important for Rayland that his brand illuminates the multi-faceted meaning of being Indigenous while also presenting future opportunities for those who, like him, were unaware of the path they could take toward self-love and respect. “We have to love ourselves – from there, we can stop the lateral violence,” he says.

On that note, an item like the “I Break Cycles” tee from Red Rebel Armour identifies not only the perpetuation of violence and oppression still enacted against Indigenous people worldwide. It also shines a light on Rayland’s commitment to uplifting those around him, as he’s currently developing a youth employment placement program that aims to enable his community to become active in areas like manufacturing and sales.

Of course, building this platform and his brand has presented its set of challenges throughout 2020; in particular, Rayland has had to shift from interacting with people at pop-up events and other social gatherings to generating awareness online. Yet his perspective remains as tenacious and forward-thinking as ever.

“This is my why. I’m very thankful that I have a second chance,” he says, adding that entering this new year, so do all entrepreneurs and creatives. “I have a strong feeling that things are going to work out. Going into 2021, it’s like, what’s next? Bring it on.”

Photography courtesy of Red Rebel Armour. Graphic by Kayleen Dicuangco.
Get the best of FASHION in your inbox Thanks for signing up!
The latest fashion, beauty and celeb news delivered right to your email #FASHIONforall Now, check your inbox to complete your subscription
We won’t ever use your email address for anything else
Want even more FASHION? Follow us on social media.