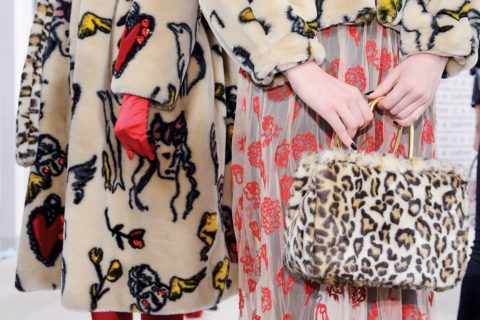 What Is Worse for the Planet? Real or Faux Fur?

Brands like Gucci, Versace and Michael Kors will not include fur in Spring collections.

One of the most enduring fashion visuals from the 1990s Club Kids scene is Deee-Lite’s video for “Groove Is in the Heart.” In it, the beyond fabulous Lady Miss Kier is wearing a bouffant hairdo, short shorts and a fluffy white coat next to which appear the words “Fake Fur.” It made the statement that fake can be fabulous—and the trend is proving to be especially true in 2018 as imitation fur goes from faux pas to fierce must-have.

Like so many of the most creative runway trends, the current faux fur revival traces its fuzzy origins to Miuccia Prada. At her Fall 2017 show for Miu Miu, models were swathed in retro-inspired faux coats, hats, accessories and boots. For Fall 2018, faux was spotted on the runways in a variety of styles, from shaggadelic at Dries Van Noten to multi-textured at Stella McCartney, a longtime animal-rights activist. Available in a rainbow of colours and soft-to-the-touch textures ranging from realistic to Muppet, the highly photogenic fabric has even earned its own hashtag on Instagram, where stars like Vanessa Hudgens have captioned their #OOTD posts with #faux or #fauxfur.

In keeping with the spirit of the original Club Kids, fun fur is living up to its name with a fabulous following of international It girls. In London, Shrimps founder Hannah Weiland built her line around colourful faux fur coats that have been worn by Alexa Chung, Susie Bubble and model Laura Bailey.

Weiland says she origin­ally gravitated toward the material because of its versatility. “Faux fur is a very malleable material; as a designer, I use a lot of colour and create amazing jacquards so there are a lot more exciting things to do with the material,” she says of her decision to go faux. “It can be both luxurious and fun. I like to think that we create items that customers fall in love with for their quality and unique sense of humour.”

For Tel Aviv-based designer Maya Reik, faux fur presents an opportunity to revive timeless styles in a relevant way for the clients of her line Marei 1998 with retro-inspired faux fur designs that easily pass for the real deal. “Sometimes I wear it and people don’t believe it’s not real,” she says. At just 20 years old, Reik has already become an industry darling. Her line has earned coverage from CR Fashion Book and Vogue and has been spotted on Bella Hadid. Reik’s Pre-Fall 2018 collection, her fifth, evokes a 1960s Elizabeth Taylor with full-length faux fur coats that retail for $2,565. Reik says she discovered her faux fabric while on a visit to a supplier. “I’m in love with it; I’m really obsessed and happy that we found such good quality,” she says. “Why should we wear something if we can find the same exact look and not in a cruel way?”

It’s a sentiment that’s echoed by Kym Canter, CEO and creative director of faux fur emporium House of Fluff on the Bowery in New York. In her previous role as creative director at J. Mendel, Canter amassed a large collection of furs, including—her favourite—a vintage monkey coat. “I felt incredibly glamorous and beautiful in it,” she says. “As culture started to change, all of our awareness started to change to the things around us: what we eat, what we put on our bodies, what we clean our houses with. My closet just couldn’t escape the same scrutiny.” So Canter sold her 26 furs and used the money to launch House of Fluff as a way to recapture the glamour she felt while wearing her monkey coat.

Alongside the rise of faux (in the United States, the faux market is worth $148.7 million, having grown 2 per cent from 2012 to 2016) has come a rejection of the real deal, with brands like Gucci, Versace and Michael Kors all say­ing goodbye to fur. New-fur sales are illegal in West Hollywood, where the sale of fur apparel has been banned since 2013. It’s a motion that Ashley Byrne, associate director at People for the Ethical Treatment of Animals (PETA), applauds.

“When you have Donatella Versace doing an Instagram post about how she’s proudly against the use of real fur, it really tells you that times have changed and that what we consider luxurious has changed,” she says. And those who trade in fur are sometimes press-shy about the fact. In April, Women’s Wear Daily asked 22 retailers to share their opinions on fur’s role in fashion. Thirteen of the stores contacted declined to comment, as did the fur-friendly Canadian designers we reached out to.

The fur market, however, is by no means dead, with global fur sales reported in the $39 to $53 billion range. To appeal to a millennial clientele, designers are using fur in more accessibly priced ways. There’s Fendi’s alpaca and mink Bag Bug Charms, Valentino’s mink-trimmed sneakers and Dolce & Gabbana’s pink rabbit Box Bags—never mind the ubiquitous coyote-trimmed parka by Canada Goose. And fur has many very influential supporters. Anna Wintour regularly includes fur in the pages of Vogue and wears it herself, as do Beyoncé and Rihanna, who in January stepped out in a $23,000 raccoon coat by Antwerp-based menswear label Jun Jie.

Alan Herscovici, senior writer/researcher at TruthAboutFur.com and former executive vice-president of the Fur Council of Canada, says that there is a lot of confusion around fur as sustainable clothing. “When you look at the modern fur trade, the way it’s regulated today, it’s an excellent example of the responsible and sustainable use of nature,” he says, adding that fur coats are often worn for decades, passed down from one generation to the next or redesigned into a more contemporary style. Herscovici stresses that synthetic fabric—whether that’s a faux fur jacket or polyester top—comes with its own set of complications.

“The problem we’re beginning to become much more aware of is that these materials don’t biodegrade very easily,” he says. “We’re now finding out that each time you wash some of these clothing materials, they leach micro-fibres—micro-particles of basically plastic that go into our waterways. They are really just another form of plastic bag.” While real fur will eventually biodegrade, faux fur made of acrylic or polyester could take as long to break down as a plastic bag does, and that’s somewhere in the ballpark of 500 to 1,000 years.

When a major label like Gucci says it’s quitting fur for sustainability reasons, you have to wonder if it has taken any other steps toward lessening its overall environmental impact and its role in climate change, especially when, according to sustainability researchers at Quantis, 8 per cent of global emissions are traced to the fashion industry (more than the emissions traced to air travel).

At House of Fluff, Canter says it’s important to look at the big picture, and that means everything in your closet. “I feel like everyone picks on [faux] fur, when, in fact, so many of the clothes we wear have a funky [problematic] textile or a funky thread, and no one really talks about it,” she says. “Are we analyzing all of our clothes?” Luxury brands Shrimps, House of Fluff and Marei 1998 say they are making high-quality products that are meant to be worn for years, not just one season.

It speaks to the broader fashion revolution toward overall sustainability that’s going on at all points in the industry, from unnecessary waste accumulated during the production process to energy consumption at physical retail stores, and it’s one that consumers play a major part in. The choices you make about what you consume ultimately inform how and what designers create, and it’s important that those decisions take into account all of the ethical, social and environmental impacts they’ll have. Information is power, and there’s nothing fake about knowing the truth.