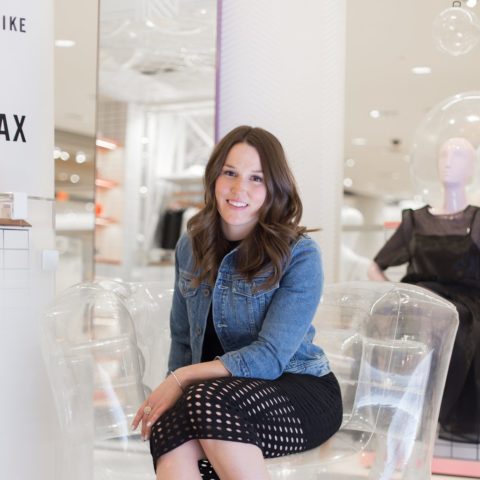 Adding to a long list of power couples, Nike and Nordstrom kicked off their women’s sneaker boutique this weekend in Vancouver. The permanent shop-in-shop mixes Nike’s shoes and sportswear with playful pieces from designer labels—MSGM, Public School and Carven, to name a few—selected by Nordstrom’s Olivia Kim and her Creative Projects team.

With March being Air Max Month (the style debuted 30 years ago), the boutique is rolling out a number of special releases, among them a limited edition Vancouver Air Max 90 laser engraved with icons befitting the city, including a Stanley Park totem pole, hockey stick, orca and area code 604. This Sunday, March 26, Air Max Day, they’ll also roll out the Tinker Hatfield-designed Air Max 1 that started it all, as well as the new Air VaporMax runner, which is the brand’s most tested shoe yet.

Sporting an ice blue version of the VaporMax with a top by Canadian designer Steven Tai and Nike sweatpants, B.C.-born pro snowboarder Spencer O’Brien dropped in on the eve of the opening to talk style and sneaks and share her picks. She says she’s in flats 99.8 per cent of the year and takes a toe-to-head approach to dressing.

The two pairs that get top billing are the Huarache in bone leather and the Air Presto in all-out orange. “I’m obsessed with orange. I’m not usually a colour person, but I saw those and I had to get them,” she says, and she’s not afraid to rock the socks pulled up trend with them either.

As for inspo, she loves the high-end-meets-vintage vibes of Sea of Shoes’ Jane Aldridge, but as the ensemble of cropped training top and Alexander Wang mesh skirt demonstrates, O’Brien’s got her own elevated athleisure thing going.