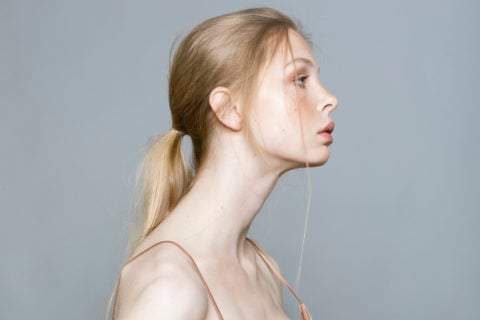 At five feet 11 inches and size 0 and with long blond hair, Rachel Romu looks exactly like the sort of person you’d expect to see walking down a catwalk or striking a pose in a glossy magazine editorial. But one thing sets this model from Thunder Bay, Ont., apart from her peers: She carries a cane.

Interestingly, it’s the cane that actually brought her to the runway in the first place. Romu was a track-and-field athlete in her youth, and her goal had always been to become an Olympic champion. But in 2016, doctors discovered a spinal tumour that needed to be urgently removed and also diagnosed her with a connective-tissue disease known as Ehlers-Danlos syndrome.

With her sports dreams dashed, Romu had no idea what life had in store for her next. Then, in the spring of 2017, Toronto designer Annie Thompson—who learned about her story in a chance encounter with a friend of Romu’s and frequently uses friends and clients for shows and shoots—asked if she’d like to appear in her next campaign.

“Modelling never interested me until it felt like there was a meaning behind it for me,” says the 27-year-old. Knowing it was a chance to represent the disabled community in the historically non-inclusive fashion industry, Romu decided to say yes. She has since worked with brands like Lesley Hampton, ZOFF and Hayley Elsaesser and is signed with the Plutino Models agency.

Toronto Fashion Week (@tfw) would usually be happening right now, but it's on hiatus (for now). I'm so thankful for all the times I've gotten to be a part of it, having worn designs by @zoffranieri , @jewelsbyalan , & @pedramkarimi_ but especially thankful to @hayleyelsaesser for being the first designer to let me be a part of her show. This was from a time where I really felt like I had to fight to prove I belonged – that disabled people belonged – on the runway, in a campaign, and in general to be frank. This segment from @wearetvo transformed from a piece pushing awareness around disability visibility and @ehlers.danlos (a rare connective tissue disease) to a treasured memento.⁣ ⁣ ?: @jeyanjeganathan for @theagendatvo

Though she has been able to insert herself into a notoriously insular industry in just a few years, Romu recalls the pushback she faced early on. “For the most part, my peers have been incredibly supportive and complimentary, but I have [overheard] models commenting about various shows I’d been cast in, saying things like ‘You can really tell what designers are open-casting’ and implying that anyone who is deviant from industry norms is somehow a less-skilled model.”

Her agents also faced initial barriers trying to get Romu’s foot in the door, but after her first few projects—which came through designers reaching out to her directly—she says the casting process became easier. “My agents have always seen my skill, professionalism and work ethic, so they were willing to fight any institutional barriers that came up,” says Romu. “They’d put me in show packages for designers who were into socially conscious casting just as frequently as they’d put me in packages for brands seeking a European blond look.”

It took me years to feel open to the idea of letting myself mourn the loss of my old life and my old body – the way it worked before my spine surgeries. I've realized I can't grab hold of what I want now if my hands are tied to what I had then. ⁣⁣ ?: @pharrisdesigns about a year ago

Furthering her advocacy for the disabled off the catwalk, Romu runs a private online support group for people with disabilities and has done accessibility consulting for music festivals like Montreal’s Osheaga. She also volunteers with the Canadian Music Therapy Fund, which provides services for people with disabilities, on its annual March for Music Therapy fundraiser. It’s a cause close to her heart since she grew up in a musical household and plays various instruments, including the guitar, the piano and brass, and has performed her own music at North by Northeast and Toronto’s Pride festivities.

“I’m leaning into all of these things that I was too scared to do because I didn’t feel like I belonged,” she says. “But the way to belong is to force yourself in there—to smash your own puzzle piece into it.”