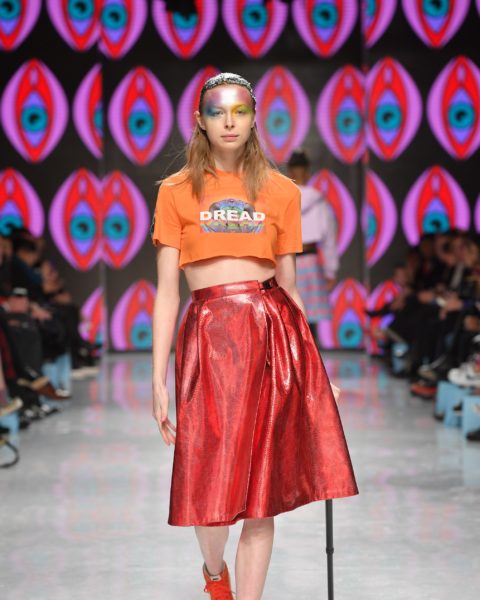 Meet Rachel Romu, the Model Redefining the Future of Accessibility in Fashion

Hayley Elsaesser, the Toronto designer known for her brash and whimsical prints, created a dystopia space theme for her F/W 2018 show, titled Cosmic Dread. The show began with a shaved-head model wearing a VR headset emerging out of a tent-like stuffed vagina, and featured a diverse cast of characters whose heads were decorated in tinfoil. One model in particular stood out: tall and pale, wearing a red metallic skirt and orange crop top, clutching a slim cane to support her weight as she loped confidently down the length of the glossy runway.

The model, 25-year-old Rachel Romu, may not be the first model with a disability to walk down a runway, in 1997, Paralympian Aimee Mullins waked the Alexander McQueen runway with hand-carved wooden legs that looked like ornate boots, and fashion blogger with muscular dystrophy Jillian Mercado has starred in Diesel and Target ad campaigns in her motorized wheelchair, but her forbears are still few and far between. Even though diversity is opening up the fashion industry to all genders and races, disability appears to be the final frontier for inclusivity.

Romu didn’t always dream of being a modelling while growing up, she was aiming to compete in the Olympics in track and field instead. However, in 2016 she was diagnosed with Ehlers-Danlos Syndrome, a disorder affecting connective tissues that can result in bent joints, weak muscles and chronic pain. As a result, she decided to pursue a path off the track and onto the runway.

She first tried out modelling as a favour to a good friend. “It wasn’t with the intent of actually pursuing it. I had a friend who was attempting to launch a scarf brand as a digital artist and she was asking me if I wanted to do a shoot with her and I said yes because I thought it would be a fun experience,” said Romu, who is from Thunder Bay.

Shortly after her first modelling experience, she had spine surgery for the second time and was going through lot of pain while not quite understanding what was going on with her own body. Her doctor, who is no longer practicing, also accused her of faking her pain to the point of needing emergency surgery. Romu chose to start modelling as she began to notice herself disappearing from family photographs as her illness progressed.

“I was laying in the hospital and there was Kylie Jenner in a wheelchair like it was a costume and I realized that a mobility device is going to be a part of my everyday life. So I wanted to create imagery that I felt positive about just for myself,” Romu said when speaking about the moment she realized what her disability meant in terms of representation.

As more people began noticing and appreciating her work, such as a magazine cover for Inspades Magazine and a shoot for Ark magazine, her modelling career began to take off after she was introduced to her agent Peggi Lepage, who signed her to Plutino Models.

Lepage knew she had to cast Romu at first sight. “Initially I can only remember thinking she’s gorgeous! Tall and lanky, very obviously has model potential. I know that some clients won’t be receptive to her use of mobility aids. But honestly, she’s professional, self aware and moves better than many that don’t have to rely on a cane.”

Romu attended an open casting call for Hayley Elsaesser’s S/S 2018 show “Teenage Wasteland,” where she was cast for the show by the designer herself.

Elsaesser knew it was important to put Romu on the runway to truly represent her customer base. “When I first met Rachel at our open casting, I was shocked when she said she was struggling to get casted for shows and shoots. She actually felt attending an open casting was the only way she could get in front of us since her agency at the time was wary to send her to runway castings,” said Elsaesser.

Most recently, Romu closed Elsaesser’s F/W 2018 show at Toronto Fashion Week. “After learning that she once again wasn’t invited to any other castings earlier this month, we decided that she should not only be in our FW18 show, but close it. We felt like we needed to highlight the fact that she not only has a place on our runway, but a starring role,” Elsaesser added.

Romu admits it took some time for her agency to understand her and her capabilities as a model when she first started. “They didn’t want to set me up for failure perhaps,” she says. Being an ambulatory mobility aid user, there was no blueprint for Romu and her agency to follow and they had to forge the path themselves.  “We didn’t have a solid direction initially, nor had we developed a relationship to a point where they felt comfortable flat-out asking about my capabilities nor how I navigated the shows I’d done on my own,” Romu says of her early relationship with her agency.

“She’s dealing with a lot of challenges on a daily basis, stuff able bodied people completely take for granted – but still she manages to give everything 100%. Undoubtedly a lot of strong work ethic from her sports years are serving her well now,” adds LePage.

Yet most of the barriers Romu has presented with in her career so far have been social, rather than physical. “Most of the places in which I’ve had shoots or even the venues in which I walk shows, for the most part have been things that I can manage. However, there’s been a number of times when I’ve walked into the casting room and I can tell they’re looking at the thing that helps support my body more than they’re focusing on my body of work,” she says.

“Some people have said that they were a little bit nervous about shooting with my cane and they decided to see how it looked by incorporating it as a feature. I treat it as an extension of my body instead of as a prop because it’s not a prop, it’s kind of like my third limb touching the ground,” she said, explaining how she incorporates her cane in photo shoots.

Speaking about the changes she wishes to see in this industry in the future, Romu said that she thinks most of them are already beginning to take place.

“For me to see people like Gigi Hadid talking about her invisible illness Hashimoto’s disease, where all of a sudden there’s a different element of vulnerability and acceptance,” she said elaborating on how the fashion world is more transparent than ever and there’s a lot to look forward to while being in the industry and this is just the beginning.

“It’s starting to take shape now. People are now more open to asking what one can do instead of assuming that someone cannot.”