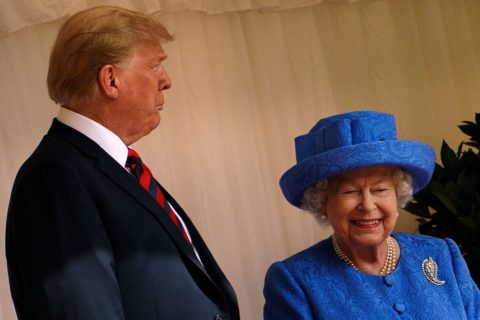 Watching the video footage of Queen Elizabeth II’s meeting with Donald Trump is an exercise in squirming discomfort. As they are meant to be inspecting a military regiment, Trump walks ahead of the Queen, blocking the diminutive regnant from view, then when he finally realizes they’re supposed to be walking together, he impatiently keeps his gait one step ahead. Trump’s rudeness and disrespect seeps into everything he does, from his erratic tweets to his basic body language. But it turns out the Queen might be the one who emerges from this situation with the upper hand.

According to, um, one Twitter user, Queen Elizabeth may have been subtly broadcasting her distaste for the petulant President in the form of the decorative brooches she wore during the course of his visit. The Queen’s fashion choices don’t tend to attract attention – that’s intentional of course – so these brooch-encoded signals would have been easy to miss if there wasn’t an entire cohort of freakishly obsessed royal “jewel watchers” who document every single detail of every single appearance.

So here it is: on the first day of her visit, Queen Elizabeth wore a small floral brooch made of moss agate that was a gift from the Obamas. And not just any gift, it was specifically presented as a token of their friendship, and not a rote political token. On the second day she wore a brooch from Canada in the shape a snowflake, which happens to be Donald Trump supporters’ favourite insult to sling at anyone they deem ‘oversensitive.’ On the third day, Queen Elizabeth wore a brooch that her mother had worn to her father’s funeral service, suggesting a rather grim mood towards the day’s proceedings. If the brooches are any indication, it appears that Queen Elizabeth II, who is not allowed to broadcast any political opinions, is not the biggest fan of The Donald.

While it could be a coincidence, it also could…not, considering the Queen’s brooches are often redolent with meaning. For the wedding of William of Kate, she wore a ‘lover’s knot’ brooch, which sounds like a gesture of good will if there ever was one. And for her 2010 state tour of Canada she donned a gigantic brooch in the shape of a spray of maple leaves. These brooch-event pairings are fairly basic, literal interpretations of the occasion at hand, so it’s not too far of a stretch to imagine that Queen Elizabeth II is in on the joke.

While it remains to be seen whether Queen Elizabeth II’s brooches were a brutal own of Donald Trump or not, it’s easy to imagine the Queen’s dresser getting a kick out of picking out such clever brooches. Understandably, Kensington Palace has not issued a statement confirming or denying the existence of the brooch-related messages.

Photography by Brendan Smialowski/AFP/Getty
Get the best of FASHION in your inbox Thanks for signing up!
The latest fashion, beauty and celeb news delivered right to your email #FASHIONforall Now, check your inbox to complete your subscription
We won’t ever use your email address for anything else
Want even more FASHION? Follow us on social media.