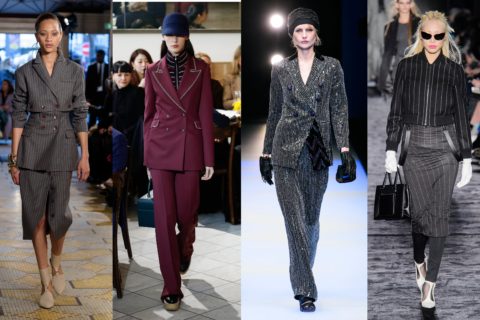 The New Power Suit: When Feminism and Femininity Collide

In these #TimesUp times, designers are undoing the seams that have long divided power and softness.

When I think about dressing for an important meeting, a scene in Nancy Meyers’s 1987 romcom masterpiece Baby Boom comes to mind. Diane Keaton’s J.C. Wiatt (a.k.a. “The Tiger Lady”), a turbo corporate consultant, marches into the boardroom of a midtown Manhattan firm to sell Country Baby, her puréed-baby-food business. She is wearing a sharp-shouldered skirt suit in shades of black and skyscraper grey, and her nervous system is as tightly wound as her giant buckled belt. She lands the deal, only to decline it. Instead, she resolves to trade her pumps and speaker phone for a butter yellow clapboard farmhouse in Vermont and continue making baby applesauce, sit in rocking chairs with her cherry-cheeked child and handsome veterinarian boyfriend and wear soft-hued feminine clothing amid tender lighting and lacy drapery. I would turn down the deal, too, if domestic bliss with a young Sam Shepard was the alternative. But that, of course, is not the point. This is: In the ’80s, power and softness were (forgive me) ill-suited. The C-suite was no place for prettiness. Power was only a pair of overachieving shoulder pads and a few pinstripes away. This point was never more memorably made than in the opening scene of Mike Nichols’s 1988 Working Girl, arguably the finest manifesto of ’80s capitalism. Melanie Griffith’s character, Tess McGill, an outer-boroughs secretary, treks to her office in a pavement-hued skirt suit, her coif as vertically inclined as her ambitions and her shoulder pads broader than the Brooklyn Bridge. Like J.C. Wiatt, Tess is suited for battle. The bottom line, however: Power and femininity did not a merger make.

Thirty years later, power dressing has evolved in ways that sexual politics have not (at least, not enough). In these #TimesUp times, designers are undoing the seams that have long divided power and softness. “I think that the suit, for a long time, was trying to emulate a menswear staple when women were wearing it to work. It was about hiding your femininity,” says Joseph Altuzarra, the (unofficial) working woman’s designer laureate. “With so many strong women today embracing a more tailored, feminine pantsuit silhouette, I think it has emerged as a symbol of female empowerment and strength. In our case, the tailoring is always about celebrating femininity and a woman’s strength.” Altuzarra can claim tailored workwear is at the heart of his brand and credits his mother, who clocked in at a bank every morning, as the inspiration for his Fall 2018 collection. While his mother may have reached for Armani, Altuzarra’s pinstriped pieces, with their hourglass silhouettes, are patterned with the kinds of delicate flowers that doff the compensatory masculinity and conservatism of her workwear. “A very tailored and sensual suit that is nipped at the waist can be just as powerful as a suit that has a strong shoulder and slouchier silhouette,” says the designer. “I think much of it is how the suit makes a woman feel—if it can make her look sexy and feel confident and comfortable.”

Altuzarra is hardly the only designer who has reimagined workwear and refashioned the notion of power dressing. Giorgio Armani, the god of
the power suit, closed his Fall 2018 show with a twinkling crystal-studded black pantsuit. And Gabriela Hearst cited “women who have to dress like men to go to work” (referencing Victorian-era coal miners) as the inspiration for her Fall 2018 collection. (Although her pieces—a double-faced cashmere robe coat lined with Prince of Wales plaid, a knit houndstooth coat, a camel cashmere wrap skirt—are more likely to accompany women labouring at charity salad luncheons than in the mines.) She has cited power women Robin Wright, Lauren Hutton (whom she met at an African Rainforest Conservancy event) and Cecile Richards (the former president and CEO of Planned Parenthood) as her muses. The designer’s extravagantly luxurious clothes are sensuous in the finery of their fabrics but also sensible and empowering insofar as they are tailored for making (literal) strides. “There’s a masculinity in my approach,” Hearst has said. If the power suit of yesteryear was quite literally disempowering—confining and encasing women as it did in its tight skirt—Hearst’s clothing is, rather, divined to welcome momentum. Stella McCartney has partnered power with leisure, offering a playful, easeful and deconstructionist take on the three-piece suit, sometimes turning menswear classics quite literally inside out: Linings have been worn as sleeves, while pinstriped waistcoats have rubbed shoulders with long coats worn robelike over trousers. Italian fashion house Max Mara, which has long trafficked in the business of swathing the power woman in camel cashmere, summarized its Fall 2018 collection with the attached show note: “Women demand success on their own terms and dress accordingly.” And even New York designer Ulla Johnson, beloved for her flowing OOO-ready frocks (not power suits), fashioned a Pre-Fall 2018 collection that was more tailored and graphic, more Manhattan than meadow, viewing this outing as a meditation on women and empowerment. “Pretty didn’t equal powerful,” she said, reflecting on the backward notion of femininity and power as mutually exclusive, “and I think that has been my life’s work: exploding the binary between feminism and femininity.” In what is arguably the ultimate self-empowering move, Johnson has cast herself as her own muse, building a brand based on her own aesthetic. She has done her best ladder climbing in prairie dresses. If this wasn’t a conscious marketing strategy, it’s been a canny one, reinforcing the design memo du jour: There is more power in freedom—more power in dismissing rules than conforming to them.

Power, I’ll admit, has not historically been, well, my strong suit. I’m sorry to admit that my bed frequently moonlights as my boardroom, that I am most often in conference with my cats and my toddler and that my uniform reclines more toward sleep suits than power suits. The closest thing I’ve had to a power suit is a pair of Oxford-striped man jams. But while on a recent trip to New York, I stayed on (glorious) assignment at The Pierre hotel—the kind of grand old-world property that employs a white-gloved elevator attendant to handle the rigours of button pressing. I had, for once, what felt like an important meeting—a breakfast date with a magazine editor in Midtown. With nary a lapel to my name, I wore a flowy, breeze-welcoming Ulla Johnson dress. As I left the hotel that morning, summer sunshine drizzling sequins over the hotel’s copper mansard roof, a liveried doorman strode into the middle of Fifth Avenue, stopped traffic and whistled down a cab for me. Fleetingly, thrillingly, I felt hopeful, empowered and ready for business. I felt like a Diane Keaton character in a Nancy Meyers movie. Which is to say that it may have been the best 15 seconds of my life.

From Left: Joseph Altuzzura, Gabriela Hearst, Giorgio Armani, Max Mara. Photography via Imaxtree.
Get the best of FASHION in your inbox Thanks for signing up!
The latest fashion, beauty and celeb news delivered right to your email #FASHIONforall Now, check your inbox to complete your subscription
We won’t ever use your email address for anything else
Want even more FASHION? Follow us on social media.