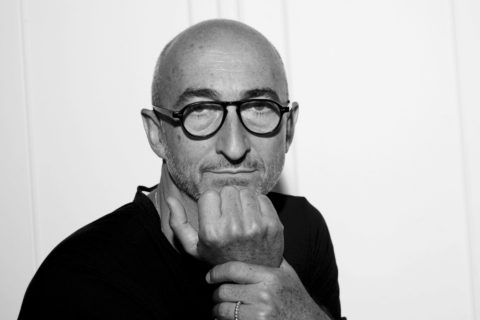 Pierre Hardy Wanted to Be an Architect, Not a Shoe Designer

How the cult designer got his start in fashion

At 63, Pierre Hardy looks as if he’s been taking covert glugs from the fountain of youth. The legendary shoe designer, clad in a casual grey crewneck sweater, jeans and his signature “nerd” glasses, is looking particularly ageless when I meet him at the Yorkille headquarters of Holt Renfrew, in a plush conference room surrounded by key pieces exclusively available at the retailer. Though he appears preternaturally youthful, Hardy is anything but green. In the 1990s he served as creative director of shoes at Hermès and built up the brand’s footwear offerings from scratch, designing the perpetually best-selling Oran sandal before going on to found his own label in 1999. Speaking quickly and animatedly in his accent-laced Franglais he opines on the state of fashion today, what’s behind our collective nostalgia and where the industry is headed.

This morning I went to preview for hiking boots, this afternoon I went to a lunch for a sneaker brand and now I’m here talking to you, a high-end shoe designer. What do you think it says about the world that so many types of shoes are popular now, that nothing is off-limits?

I think it’s definitely a sign of modernity. Nothing is forbidden. It’s funny, fashion is supposed to be avant-garde. It used to be a field of research, but not anymore. Our period is not avant-garde at all. We are totally in a nostalgic, melancholia, retro moment. Nobody would dare to propose something that never existed before.

We are too insecure. In the 1960s or 70s, we used to believe in the future, progress, that things are going to be better. Now, nobody is thinking that the next thing will be better. So we try to reassure ourselves with something we already love, picking things from the past and making them new. It is what it is.

Is there anything you feel particularly nostalgic about?

I’m going to say no. I’m not vintage. I never go to flea markets. I never work on my own archives. It doesn’t work for me. I enjoy creating newness; trying to invent new shapes, new compositions, new balance. Of course, I still have moments and memories [that I look back fondly on], even if they are twisted and transformed. You saw this movie, you saw this image, and it comes back, even involuntarily.

Do you have a favourite shoe that you’ve designed?

That is difficult to answer because the most successful thing I ever designed, I didn’t expect it to be [popular]. The flats [I designed] at Hermès have now been a bestseller going on 25 years. I would never have bet on that. I started very selfishly, for myself, [designing] a sneaker that reminds me of the ‘80s, when I went out dancing on roller skates when I was 17. Something stupid, a little nostalgic. That style has been going on ten years. There’s not one thing in particular that I’m proud of, its the possibility of the dynamic. That’s why I’m still doing fashion, because it’s not fixed.

A long time ago I had the fantasy to be an architect, but I was so bad at mathematics. Actually I wasn’t bad, I was lazy and didn’t want to pay attention, so I didn’t do architecture. But now, I think, ‘would I have the passion to do a project for three years and then wait 10 years to build it?’ I’m not sure that would fulfill my character. I think what I love in fashion is it was dynamic. It’s a flow and that is very interesting, creatively.

If you initially wanted to be an architect, how did you get into designing shoes?

I did not plan that one day I would have a shoe brand. The only thing I loved was drawing and painting. I had friends in fashion and one asked me, ‘can you help me to illustrate my portfolio, and I will show your work.’ So I became an illustrator. I worked for several magazines at the end of the 1980s, then somebody said, ‘if you can make an illustration of a shoe, maybe you can make the shoe.’ I designed a collection as a project and step-by-step I became a shoe designer. It was really through drawings.

How has your approach to designing shoes changed over time?

Over time, like a person, my brand has grown up and become more mature. That doesn’t mean to make concessions because I don’t believe that concessions make a good product. The brands that are working well are the ones where people recognize an identity, a statement, a vision that has a sincerity and honesty about it.

The landscape has changed a lot. A few decades ago shoes were accessories, that’s it. At Hermes, there was no shoe collection proper. There were some styles that went from one season to another, but no specific creative statement. Then some fashion brands, Prada for example, decided to put as much energy into accessories as they put into clothes. That shifted the landscape. The look of the shoe suddenly became a point of access to an aesthetic. All ready-to-wear brands became accessory brands.. Now if you look at the numbers of many brands, accessories are the platform of their incomes 70-80% of the time.

Does that make your job easier or harder?

It’s a challenge of course. I’m just doing shoes so I never know with what [my customer is] going to wear it with. It’s a little awkward. But it also makes things easier because there is such a demand for shoes. So, both.

What are some important qualities that you try to impart into all the shoes you design?

I try to make shoes that are graphic, clear, pure in a way. I try to avoid decoration. Rarely will I put a thing on top of a shoe just to make it pretty. Maybe that’s a prison, because sometimes it is pretty just to add something. But it’s not what I do.

What kind of a woman does Pierre Hardy design shoes for?

I think she knows. She can be experimental, but always has in mind a notion of elegance. She’s not a punk! She’s not wearing Doc Martens with a zipper; you don’t need my brand for that. Probably she is quite aware of creatively what is happening in this world.

Where do you think the future of footwear is headed?

I think we’re not finished with sport. Like you said, there are running shoes and now trailing shoes are popular. Sports are a field of engineering which has given us new shapes, new materials, and new assemblages to work with. But I think in fashion there is always that taste for the opposite; people still want to see beautiful leather, rare colours. I hope for the moment, that doesn’t disappear. Probably the next thing will be a new combination of things we already know.

Photography by Pierre Evan
Get the best of FASHION in your inbox Thanks for signing up!
The latest fashion, beauty and celeb news delivered right to your email #FASHIONforall Now, check your inbox to complete your subscription
We won’t ever use your email address for anything else
Want even more FASHION? Follow us on social media.