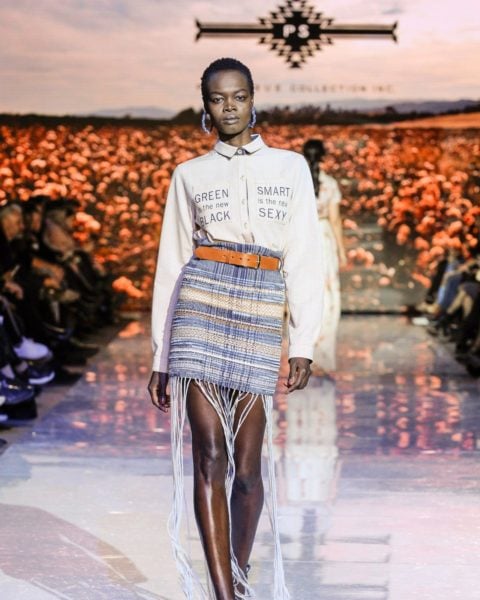 In three short years, Peggy Sue Deaven-Smiltnieks has become a darling of the sustainable fashion movement in Canada with her small-scale, hands-on approach to design. And now, with her Peggy Sue Collection nominated for the 2018 CAFA Fashion Impact Award, she has much to celebrate.

It wasn’t always like this for the American-born designer. In 2009, she worked in New York in supply chain management and product development, designing lines for various big box retailers. There she learned about industry-standard global supply chains, which focus on maximizing efficiencies, cutting costs and expediting timelines. While attending seasonal textile trade shows, she noticed there weren’t many North American companies. The reason? Smaller North American fabrication businesses were not developed enough to go to these trade shows and connect with established design houses.

Don't leave home without bundling up in your scarf. You'll need it today… The Collectibles Knit Wrap Around Shawl in 4 Natural Colourways. Available at @shopartisella and our online boutique.

“It was apparent that even if a consumer wanted to buy quality pieces that were traceable and sustainable, there were incredibly limited options,” says Deaven-Smiltnieks, who is now based in Milton, Ont. “A lot of them weren’t from North American supply chains.” So, in 2014, post-recession, when she started conceiving her own line, she hand-picked North American producers and built her own supply chain.

Today, her Canadian-made Peggy Sue Collection is composed entirely of North American-produced fibres. Skirts, coats and jackets in upcycled woven denim, organic cotton or 100 per cent local alpaca and wool overturn this prevailing idea that sustainable fashion isn’t sexy. All of the denim used has been diverted from Ontario landfills, and there is zero waste—even denim leftovers from other garments are blended into white wool yarn for sweaters.

Short days. Wooly hats. Our soft and cosy toques are crocheted from local wool and alpaca. Shop our IG feed – link in bio.

A post shared by Peggy Sue Deaven-Smiltnieks (@peggysuecollection) on Dec 4, 2017 at 2:25pm PST

One may wonder how such an ethical and sustainable company could possibly stay afloat. Deaven-Smiltnieks says it’s as simple as “cutting the fluff.” Rather than mass production that creates waste, everything is produced in small batches while more expensive pieces are made-to-measure upon order.

Following the 2016 U.S. presidential election results, Deaven-Smiltnieks remembers being especially crushed. “I was at a total loss as to how fashion could bring anything positive into this bleak chasm,” she says. In response, she made the most egalitarian garment she could think of: a T-shirt. On her website, you learn that the logo tees with slogans like “Fashion CAN Support People + Planet” begin at the Texas Organic Cotton Marketing Cooperative and end with assembly in Mississauga, Ont. That helps to explain the $125 sticker while giving credit to the producers. “It’s so important to hold up these people and their incredible skills and say ‘Do you like this textile? This is the farmer who toiled day in and day out to grow this exemplary fibre.’”

Yesterday we were honoured to be featured on CBC's The Goods @cbcthegoods with guest host @thejeannebeker (we love you Jeanne!). The discussion of #ecofashion keeps getting bigger, rippling outwards and touching more and more people. Thank you to Jeanne Beker and everyone at the CBC that started this ecofashion conversation and told our story. Change happens. Change is happening.

A post shared by Peggy Sue Deaven-Smiltnieks (@peggysuecollection) on Oct 3, 2017 at 5:07am PDT

In addition to her CAFA nomination, Peggy Sue Collection also won the Design Forward Award, valued at $50,000, in October 2017.