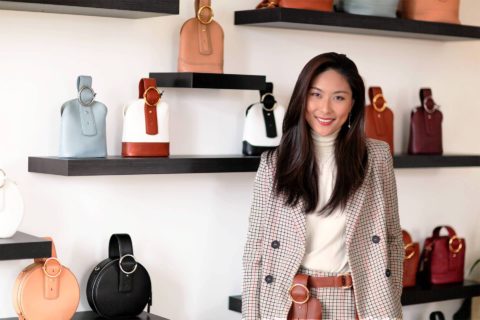 The Accessories Designer Who Turned Her Heartbreak into Handbags

Parisa Wang found out her boyfriend was cheating on her. Then she started her handbag line. As it turns out, success really is the best revenge.

Parisa Wang’s bags are everywhere. The clean-silhouetted, hardware-bedecked bucket bags have been spotted on influencers like Katie Sturino, Chrissy Rutherford, and Carla Estevez and regularly make the cut into magazine roundups of ‘non-boring bags.’ But the line may never have existed had their designer not gone through a particularly savage breakup.

BACK IN STOCK ? Our bestsellers are back – by popular demand! Don’t miss out again! Xx #parisawangny

Wang, a Hong Kong native, was studying accounting at Miami University in Ohio when she met her now ex. The two began dating when Wang was in her final year of undergrad, and when she graduated, she decided she’d rather try her hand at design rather than consign herself to a life of balancing the books. Wang moved to New York to pursue an associate’s degree in fashion design at Parsons. Meanwhile, her relationship was on the fritz. As she tells it:

“I was dating this guy for four years in college. I invited him to come to New York so we could move towards our goals together, but he kind of pushed the agenda later and later. Finally, I got depression, broke up with him, and found out that he was actually seeing someone else on the other side of Ohio.”

Wang was devastated but knew she wanted to turn her heartbreak into something tangible. Months after breaking up, she made the decision to launch her namesake accessories line. “I decided to design a line of handbags capturing feelings of love,” she says. “Each bag is based around a feeling of love.” (Bags bear names like addicted, enchanted, devoted, and allure.) “The first handbag design was inspired by the saying, “Wear your heart on your sleeve,” so it’s designed like a bracelet bag that you can wear it on your wrist or like a crossbody.”

“I didn’t know if it was the right direction at all. I didn’t know if people would like it. I took a risk. At the time I was reading a book by Elizabeth Gilbert, Big Magic, and she says that creativity wants to be born through you, and I think that moment happened to me exactly. I just chose to tell my story through handbags.”

It seems safe to assume that a brand born out of heartbreak might be a little bittersweet for its founder, but Wang insists she feels the exact opposite. “The real message is encouraging women to be courageous and independent and go for the things that really matter to them,” she says. “While heartbreak is a part of life, the important thing is what grows out of it.”

Wang is living proof that not all breakups are bad; in fact, they can be a catalyst for living out your dreams. And she has managed to find love again.

When I ask Wang if there is anyone new in her life, she giggles, “Oh yeah. That was a long time ago and I have moved on.”

Photography Courtesy of Parisa Wang
Get the best of FASHION in your inbox Thanks for signing up!
The latest fashion, beauty and celeb news delivered right to your email #FASHIONforall Now, check your inbox to complete your subscription
We won’t ever use your email address for anything else
Want even more FASHION? Follow us on social media.