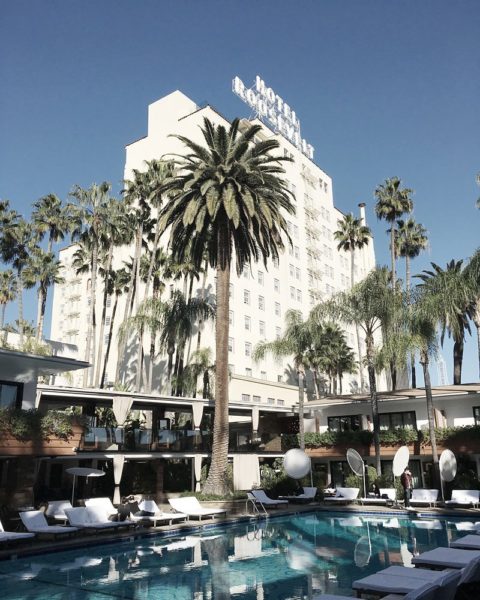 Oscars 2017 Prep: The Guide to Getting Ready like an A-list Star in Los Angeles

Because we’ve ALL imagined ourselves making it like Emma Stone in La La Land.

Welcome to the Oscars and congratulations on your nomination! You’re a rookie in Hollywood, but don’t panic, we’ve got you covered with all the right places to dress, de-stress, dine, see and be seen. If La La Land and its 14 nominations (tying Titanic and All About Eve for most nominations in a single film) taught us anything, it’s that big dreams really do come true in the city of Los Angeles.

At first glance, The Hollywood Roosevelt is situated in a tourist zone, but given that it’s just steps away from the renowned Dolby Theatre, it’s also the preferred hotel to the stars when traffic on Hollywood Boulevard shuts down on Oscar night. From its famed pool parties to the $100/hour bowling at The Spare Room, a gaming parlour on the mezzanine, this place has history: In 1929, the first-ever Academy Awards ceremony took place in the Blossom Ballroom with guests like Charlie Chaplin (and lasted all of five minutes); Shirley Temple learned to tap dance on the tiled staircase ascending from the lobby; for two years Marilyn Monroe lived in the all-white room overlooking the pool, now called The Marilyn Suite; and in 2008, Reese Witherspoon caught up on her beauty sleep in the tower when she won an Oscar for playing June Carter in Walk the Line. (She continues to request the same suite for luck.)

Runyon Canyon, the 130-acre park, is only two blocks away from your hotel, and there’s nothing like a rigorous hike in the great outdoors to get your blood pumping. With multiple routes of varying inclines and difficulties, there is something for every fitness level and a good-vibes opportunity to look out on L.A.’s sweeping city views like you own the place. This is also where your fellow 2017 Oscar nominee, Ryan Gosling, is known for clocking miles. So, hey girl, do as the celebs do: Zip up your hoodie, throw on your shades and go incognito—your fellow hikers will be watching.

Chateau Marmont: After that workout, you’re ravenous, but we get it, you have a dress to fit into. Try the squash soup with vegetable broth, Swiss chard and black truffle at this castle in the hills. (If you need a fashion-girl stamp of approval, Chateau Marmont also stars in Rebecca Minkoff’s Spring 2017 Escape to Cali ad.) Hosting pre-awards show parties, but not typically recognized for its yummy menu, you’re sure to stumble upon the movie-industry crowd: Eavesdrop on the producers one table over as they discuss the casting for next year’s big film. There’s lots of lush greenery on the patio to hide behind.

Pin the dress of your dreams and call your stylist, Anita Patrickson. You’ll be in the company of stars like Emma Watson, Chanel Iman, Chrissy Teigan and Portia de Rossi. Luckily, L.A. has all the red carpet glitz in the world to justify outpost showrooms: Designer gowns are flown in from New York, Europe and beyond for your convenience, but there’s always the option of custom. “It’s a bit more stressful, but also more fun,” says Patrickson, who’s dressing Olivia Culpo in a custom gown for this year’s event. “I try not to get too stuck on one idea, keep options open and just really see what comes up. That way we give ourselves the best chance of having a real moment.” And for pre and post events, she’s aiming for Best Dressed Overall: “If you’re dressing a nominee, you want their entire awards season to have an arc to it and for there to be some kind of a story. One look needs to feed into the other.”

In this town, cool BFFs Riawna Capri and Nikki Lee from Nine Zero One might have a monopoly on celebrity hair. Morphing your lob into a full, billowy mane (they’re known for doing extensions within hours), they’ve worked with all the great ‘dos: Selena Gomez, Amy Schumer, Blake Lively, Eva Longoria, Kristen Stewart, Mila Kunis and Miley Cyrus—not to mention Steven Tyler. With a combined platform of over 500K followers on Instagram, they’re both power women you want to know.

Calm your nerves with a relaxation massage at The Spa at the Ritz-Carlton, the picturesque 8,000-square-foot spa on the second floor of the 54-storey L.A. Live building, which is adjacent to the Staples Centre (à la Grammys, Lakers, etc.). Your massage therapist will walk you through a bespoke aromatic treatment on a heated table and work out that specific knot that’s been tweaking since you were running Runyon Canyon. Once it’s over, chill out in the serene coed sanctuary room with your choice of lemon water or champagne.

Bestia, because you just had the best night ever. (In reality, Bestia means “beast” in Italian, which you might discern from the meat hook chandeliers and fight weapon decor.) Your buddy Jay-Z made the reservation (seriously, he hangs out here), and let’s face it, you haven’t eaten carbs for at least six months, so nothing will compare to the smoked chicken liver paté or the rich house-made pastas. Owned by husband and wife team Ori Menashe and Genevieve Gergis and situated in the heart of the Arts District, this is just one way to top off a great awards season—with extra cream.

Photography by Caroline Gault
Get the best of FASHION in your inbox Thanks for signing up!
The latest fashion, beauty and celeb news delivered right to your email #FASHIONforall Now, check your inbox to complete your subscription
We won’t ever use your email address for anything else
Want even more FASHION? Follow us on social media.