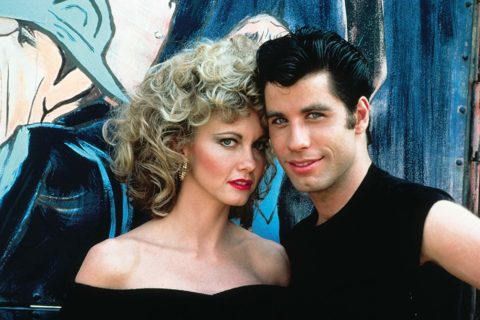 Iconic Grease costumes are hitting the auction block, another creepy photographer gets outed and more...

Olivia Newton-John’s Grease Costumes are Going Up For Auction

Even though I’ve never seen the movie Grease, I know what it looks like: Skintight black pants, shrunken motorcycle jackets and those cotton candy-coloured pink satin bomber jackets.  Now a number of Olivia Newton-John’s iconic costumes from the film will go on the auction block at Julien’s Auctions in Los Angeles in November, including the trouser and leather jacket combo, which is expected to reach a price of $230,000. The lot also includes a custom Pink Ladies jacket that was made for Newton-John’s character Sandy, but was never worn in the film. “These things are in pictures, so I have a wonderful memory of them and that’s what it’s about. They’ve been hanging in a closet [in a Los Angeles storage facility] so it’s much better if someone is enjoying them and that the money goes to benefit something that I care about,” the actor told The Guardian. Newton-John plans to donate some of the proceeds of the sale to the Olivia Newton-John Cancer Wellness & Research Centre in Melbourne, Australia. (The Guardian)

Diet Prada strikes again. On Monday, fashion’s watchdog Instagram account published DMs alleged exchanged between the celebrity photographer Marcus Hyde, who has photographed Kim Kardashian and Ariana Grande, and Sunnaya Nash, a model who responded to Hyde’s request for subjects. In the alleged exchange, Hyde tells the woman that if she sends him nude photographs he will photograph her for free, otherwise he will charge $2,000. “Gotta see if your [sic] worth it,” he writes. When the woman declines, he writes “Find someone else. Ill [sic] keep shooting celebs.” After Nash went public with the exchange, at least 50 other women came forward about similarly creepy experiences with Hyde. Diet Prada’s call out has reenergized the conversation around fashion photographers demanding sexual favours from models as well as how Instagram can be used as a platform for seeding abuse. “It is scary how easy is it for anyone to pose as an agent or another modelling industry figure,” senior VP of IMG models Jeni Rose told the New York Times. (New York Times)

Gross @marcushyde . @kimkardashian @arianagrande , come get your boy and teach him some decency. Last night, Los Angeles model and interior design student @sunnnaya replied to the celebrity photographer’s Instagram story seeking models for a shoot. What transpired in their DM was nothing short of the typical predatory douchebaggery you’d expect via shady Instagram “castings” by slimy dudes. With her followers backing her up and sharing her post, Hyde had a simple reply: “suck a fat big dick”. That’s sure to get you points with the ladies, Marcus. • #marcushyde #kimkardashian #kendalljenner #khloekardashian #arianagrande #photographer #celebrity #casting #model #shady #gross #kuwtk #wiwt #ootd #film #digital #camera #celeb #behindthescenes #dietprada

Will Smith Lands a Moncler Campaign

Will Smith has been chillin’ out, maxing relaxing since his days as the Fresh Prince of Bel-Air and lately he’s found a way to do it in style. Smith is the subject of a new campaign from the brand Moncler, in which he wears a puffy jacket and appears to levitate like a genie in a sparse room. The campaign is called “Genius is Born Crazy” and purports to explore “the antagonistic relationship between genius and crazy,” as reported by WWD. “I believe in the power of crazy, and I always give a chance to a crazy dream. It’s an honour to have Will Smith, in his first advertising fashion campaign, embracing our ‘crazy’ idea to celebrate the genius hidden within everyone,” says Moncler CEO Remo Ruffini. Though the link between madness and art has been scientifically debunked, the “crazy genius” myth still exists in our culture as a harmful stereotype that may prevent some mentally ill people from seeking much-needed treatment, but I guess no one bothered to tell Moncler. (WWD)

Moncler is proud to unveil @WillSmith as the face of Genius is Born Crazy. The campaign is the first of his acclaimed career. As an actor, producer and musician, Will’s creative vision and commitment are a testament to the fact that #GENIUSISBORNCRAZY. _ Hear more from the mind of a Crazy Genius in our Instagram Stories.

Goop and Rosie Assoulin Have Launched a Capsule Collection

Earlier this month, the New York Times published a story about the unofficial dress code at the Goop headquarters in California, where employees tend to dress in a manner that’s as aspirational as the brand they represent. (There were plenty of prairie dresses, linen and clogs in the office that day.) Now Goop has teamed up with New York designer Rosie Assoulin for an architectural, somewhat monastic capsule collection that would look impeccable on every single person who works in that office. “Rosie has a way of breathing optimism and joy into shapes that feel familiar yet somehow entirely new. This is a creative partnership that marries the best of both of our worlds,” Paltrow herself said in a statement. Prices start at $450 CAD and are available at goop.com and at Goop’s Bond Street store in New York. If you’ve been searching for the perfect puffy-sleeved pilgrim shirt, this might just be the one. (Press Release)

Photography Courtesy of Paramount Pictures
Get the best of FASHION in your inbox Thanks for signing up!
The latest fashion, beauty and celeb news delivered right to your email #FASHIONforall Now, check your inbox to complete your subscription
We won’t ever use your email address for anything else
Want even more FASHION? Follow us on social media.