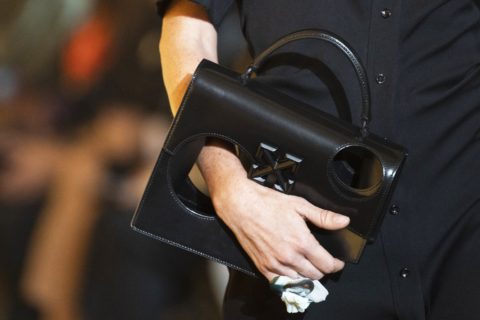 Today in Paris, Off-White presented its S/S20 show to the fash pack during Paris Fashion Week and whilst there were plenty of pieces to covet, there is one in particular that has us all a little confused.

Several of the models traipsed down the runway with a bag full of holes on their arm. One is large enough to fit your arm through to carry the purse (practical) but when not in use would leave your belongings in a rather precarious position (not practical).

The style is called the Meteor, and has been designed with the holes so as to mimic what it would look like if a meteor had torn through the bag itself. In a release, the brand admits that the bag is essentially useless, describing it as “unfunctional” adding that it is “challenging the concept of a bag itself, one of the most common objects in our everyday lives.”

Perhaps the most surprising part of it all is the fact that the bag retails for over CAD$2,200. That’s a significant amount of money to pay for a bag that doesn’t do what you need a bag to do. Perhaps a jacket with plenty of pockets is the answer when wearing it?

Although if you’re keen on the style but not on the holes, the Meteor’s design is very similar to the brand’s Jitney purse.

Virgil Abloh was noticeably absent from the brand’s show, following advice from his doctors. Earlier this month, the designer revealed that he will be taking a three month break (which started immediately) to ensure his health would get back on track. At the time he said, “In high school I always took pride in the award where you didn’t have any sick days [but now] being busy isn’t working. But I’m using this as I do everything else, as a way to propel me forward.”

Photograph by Imaxtree
Get the best of FASHION in your inbox Thanks for signing up!
The latest fashion, beauty and celeb news delivered right to your email #FASHIONforall Now, check your inbox to complete your subscription
We won’t ever use your email address for anything else
Want even more FASHION? Follow us on social media.