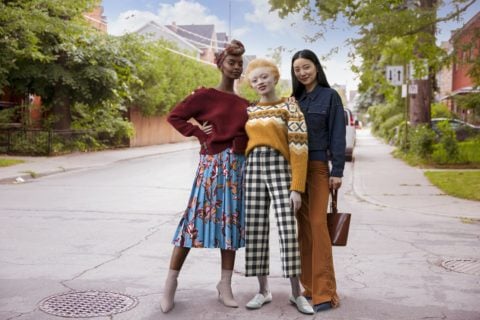 This Campaign Is a Celebration of Canadian Diversity

“True Nord Strong and Free.” That’s the phrase that accompanies the images from Nordstrom’s first-ever Canadian campaign. The play on our National Anthem’s lyrics are meant to celebrate the diverse multiculturalism and inclusivity Canada is well-known for. Its especially apt considering most of the “models” they’ve tapped for the campaign aren’t models at all, instead featuring regular Canadians of all different ages, genders and races.

One of the campaign’s stars is Biko Beauttah, the United Nations Goodwill “Glambassador,” whose job is all about navigating diversity and keeping the focus on the common values that connect us all as human beings. She’s also the founder and president of Trans Workforce, a symposium that acts as a networking opportunity for transgender or non-conforming people.

Mel Kobayashi is one of the other faces. The Vancouver-based blogger is breaking down barriers with her blog, Bag and a Beret, and proves that good things come with time (and age). Now in her 50s, she continues to inspire with her incredible style and celebration of ageless beauty.

Other models include stylist and consultant, Harjas Singh and plus-size model Yolanda May Largie who co-founded The Canadian Curvies, an organization that celebrates unedited curvacious bodies.

The man behind the images, Justin Tyler Close, spent time with each model to create a composition that truly reflected their individual styles.

The fashion highlighted in the campaign also celebrates Canadians, with designers like Jenny Bird, Poppy Finch and Wings + Horns.

From Left: Peace Haje, Mirian Njoh, Ishie Wang. Photography by Justin Tyler Close for Nordstrom.
Get the best of FASHION in your inbox Thanks for signing up!
The latest fashion, beauty and celeb news delivered right to your email #FASHIONforall Now, check your inbox to complete your subscription
We won’t ever use your email address for anything else
Want even more FASHION? Follow us on social media.