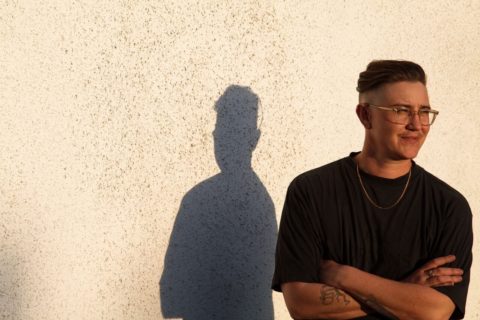 Dressing While Non-Binary: One Writer Reflects on Their Experience Growing Up In-Between

"Something awful happens when you enter the 3-D world and clothes become non-neutral enforcers of this overwhelmingly unstoppable thing."

Salesmen in expensive clothing stores like talking to me. I’m not sure why, except I frequent them often, hoping for some magic (i.e., impossible) fit. When I lived in New York, my therapist’s office was above one such store, and I always dropped into it post-session. That spring, we were working on boundaries, like usual. “This sounds like it’s about how you had to wear dresses and hide your braids—which your mom wanted you to have—in your shirt,” she’d say.

When I was eight, I did tuck my waist-length braids down the back of my surfer T-shirts. I wore the shirts with ripped-up Converse or Vans. “Hi, I’m Tom,” I’d say to whoever would listen, balling down my baseball hat with my fist. Also: Ryan, James, Tyler, Jake…the list of names that fit me better than my own went on and on. This kind of transformational clothes wearing wasn’t popular in 1980s suburban America and often ended in conflict, sometimes violent. But wearing clothes then was also so much easier than it is now (i.e., post-puberty plus weird genderless—but still in the way—hips).

Salesmen must like talking to me because I seem so open and receptive, even though what I really wanted to do at 3:47 on Friday afternoons was walk around the store below my therapist’s office like a zombie for 15 minutes touching things and then leave. It’s true I often bought items in this state of chaotic post-therapeutic gloss. Like the time I bought a Havana-style silk shirt covered in vivid toucans that barely concealed my mostly-flattened-by-surgery chest. The shirt was a strange choice, reflecting my new “I no longer give a f*** about my body and its shape under fabric” stance. “What do you think?” I texted my girlfriend a quick pic.

Really, I hate silk shirts and prefer durable, body-combatting battle gear. I’d like to wear a Carhartt sack—the thick triple-stitched canvas, the boardlike drape—every day, including to bed. Carhartt does ac­tually make these but only, I’ve learned, for babies.

Growing up, I was jealous of my younger brother, jealous of my best friend who takes testosterone and now I might very well be jealous of my one-year-old son. It doesn’t matter that my brother can out-drag Shakira, that my friend is gentle and generous, that our son doesn’t yet know what gender is.

Something awful happens when you enter the 3-D world and clothes become non-neutral enforcers of this overwhelmingly unstoppable thing. Even Carhartts are made for male bodies and slim pelvises. Of late, I’ve tried to soothe this with Japanese and new Nordic fashion: thick fabrics dyed naturally and cut into drop crotches and boxy, hip-unhugging shapes. I recently implemented this strategy at a wedding and was told I “looked very comfortable,” which I took to mean that maybe I had just rolled off someone’s couch.

In a way, I guess I had. At the store under my ther­apist’s office, one salesman finally got suspicious. “I notice you always come here on Fridays at about the same time,” he said. Reassembling my new transparency, I agreed. “That’s true,” I said. “I have therapy upstairs.” “Therapy,” he exclaimed, while shoving blazers at me. “I’ve always wanted to try that!”

The blazers were cool, too. Dries Van Noten, with a paisley “in the jungle sipping absinthe from a gold-plated yerba-mate straw” vibe. Still, I had to come clean. “It’s my fe-male bo-dy,” I explained, rolling my eyes as if we were already both in on it (i.e., trying not to make him feel like a complete dunce).

Now I only buy blazers online, strictly adhering to terms like “indigo overdye” and “unstructured.” Besides, I can’t return to the store under my therapist’s office. Sure, I no longer live in New York, but, worse, the last time I entered, the sales guy rushed at me. “Hey!” he shouted. “How was therapy?!”

That day in therapy I’d been sitting fluorescent-cheeked for what felt like days, chewing over the same body-related cud.

I grabbed something from his outstretched hands and threw it toward the register. The shirt was impossibly slim-fitting; I’d never wear it, but I wanted him to think I would. “Everything’s a billion per cent fine.”

Photography by Johanna Breiding
Get the best of FASHION in your inbox Thanks for signing up!
The latest fashion, beauty and celeb news delivered right to your email #FASHIONforall Now, check your inbox to complete your subscription
We won’t ever use your email address for anything else
Want even more FASHION? Follow us on social media.