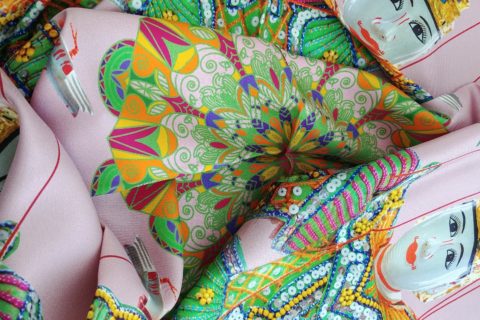 Though she’s only been in business for a year, Nimi Nanji-Simard has always harboured a distinct passion for scarves. “I think when I was 20 years old I started wearing them. No outfit ever seemed complete without a scarf,” recounts the designer behind Niminimi Scarves, which has been nominated for a 2018 CAFA Fashion Impact Award.

Niminimi operates on a philosophy she calls gilt vs. guilt. The $300 silk scarves are undeniably a luxury product, with hems hand rolled in Italy and luxurious 14 momi silk, and a frivolous one at that. But the label combats any guilt one might feel by making such an extravagant purchasing with the act of donating 30% of profits to a charity of your choice. That’s $100 per scarf. “Anybody can go on my website and say ‘I like this scarf,’ and give [to charity.] Anything that has a charitable number in Canada, I will send money to,” she says.

At age 61, Nanji-Simard wasn’t always a glam-yet-altruistic scarf designer. She first came to Canada in 1972 as a political refugee after being expelled from her birth country of Uganda under the dictatorship of Idi Amin. After spending five years in Kenya with her husband, a highfalutin’ manager with the Fairmont hotels, the couple moved back to Montreal in 2013 so her husband could seek treatment for cancer.

“Being a caretaker, the scarves have been an upliftment in my life,” she says. “It’s a fabulous distraction.”

Designing scarves may have initially started as a passion project, Nanji-Simard says it’s become something of a vocation. When I ask her why it’s so important for her to give back in the first place, she answers, “We give to the country that helped us.”

Of course, she concedes there’s a business reason for giving such a high percentage to charity. “When you introduce luxury product that nobody knows about and not many people wear,it doesn’t get much attention,” she says. “But if you attach it to something else like I did with charity, the word gets out very quickly.”

Word is getting out about more than just her good intentions. Niminimi scarves have been worn by political luminaries such as Sophie Gregoire-Trudeau and Christine Lagarde, managing director of the International Monetary Fund. Coincidentally, Lagarde was profiled in a 2015 article in Fortune titled ‘Are scarves the next power accessory?’

Her advice for those who might feel intimidated by an accessory that project such effortless  je ne sais quoi? “It’s not a big deal to wear a scarf,” she says. “Don’t tie a knot. Don’t tighten it up. Just let it flow.”

Photography via Niminimi Scarves
Get the best of FASHION in your inbox Thanks for signing up!
The latest fashion, beauty and celeb news delivered right to your email #FASHIONforall Now, check your inbox to complete your subscription
We won’t ever use your email address for anything else
Want even more FASHION? Follow us on social media.