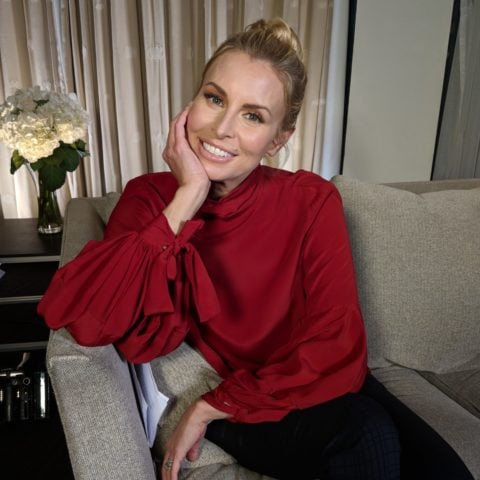 Niki Taylor is Not Just a Supermodel, She’s a Survivor

The 90s supermodel talks family, health and her new partnership with Up! Pants

The biggest surprise in meeting 90s supermodel Niki Taylor isn’t how sweet, friendly, and pretty she is. It’s that she is only 43 years old. But this is what happens when you’ve been in the public eye since you were 14; people like me lose perspective on how much time has passed.

Taylor, she with the distinctive beauty mark, started modeling at peak 1990s Supermodel Craze, and went quickly from all-American girl to one of the most successful working American models ever. In May 1996, Taylor made fashion history by appearing on six different magazines covers in the same month. But life hasn’t always been the stuff of aspiration and dreamy photo shoots. In 1995, she was broadsided by the loss of her sister Krissy. That was followed by marriage and motherhood to twin boys before divorcing in her early 20s. Then tragedy struck again, as she was nearly killed in a horrific car accident in 2001. Time away allowed Taylor to recover physically, while starting over personally with second husband, the former race car driver Burney Lamay, who is father to her two younger children.

Today Taylor is remarkably well-rounded, confident and thankful. While in Toronto to shoot the campaign for Montreal-based Up! Pants, we met with Taylor, who let us know she’s happier than ever and still super, well kind of.

What do you think of the term supermodel?

Niki: I don’t even know what that means anymore. I think everybody takes up the term of supermodel, so, no, I’d rather be supermom, trying to juggle being a mom and a career at the same time.

How did you got into modelling?

Niki: I got into modelling pretty much the same way everybody else does: ‘Oh, you’re really tall you should be a model!’ was the comment that my parents were always getting. When I was about 13, we took some snapshots and with another local photographer, we made a little com card and we went to a couple of the agencies in Fort Lauderdale and then signed with one there. Then I was encouraged to go to New York, after about a year and that’s really when things started to get going.

One of your sons is a model. What kind of advice did you give him?

Niki: He is old enough now. I just love that he wanted to try it, and I support him in everything he wants to do. Hunter, he’s really good on the runway and all the clothes look amazing on him. I love that I can share a little bit of my world with him. Then, Ciel (her 8 year old daughter) got to be in a Sherri Hill fashion show during New York Fashion Week and she was so cute with this little red dress. She just puffed down, did her turn, her hand on her hip and went back, it was so much fun. Then I also had to take her to the Marc Jacob’s show and she was lot of fun. I feel like it’s just kind of in our blood and it’s just natural for models that have kids in this industry.

What was it like to work with Gianni Versace on his iconic Versace campaigns in the 90s.

Niki: It was an honour to be part of it. I was in Hong Kong actually when I got the news of his passing in my hometown, in Miami. There was no news or anything but I had a lot of interviewers coming up to me. ‘Hey, what do you think of this?’ I said ‘I don’t know what happened, I don’t know what’s going on, I don’t have the details yet.’ I was the only American there and it was Fashion Week in Hong Kong when it happened. I just didn’t believe it. I still don’t believe it. What a power house, Donatella as well. There is only one Versace, one of a kind. I was really lucky to be a part of that.

And you’re here in Toronto with Up! Pants?

Tell us about your involvement with the Red Cross.

Niki: Well, the Red Cross was there for me when I needed them. I was in a car accident back in 2001 and I needed over 100 units of blood to save my life. It was the American Red Cross that supplied the hospital with blood. So I owe my life to blood donors and I wouldn’t be here without them. So, now I get to be that spokesperson for their blood donation campaign and every year. For over 10 years now, I’ve been encouraging people to roll up their sleeves and give back, especially during the summer months. There is a shortage, you know, everyone is on vacation and kids are out of school, so yeah I do that every year.

I didn’t know about the shortage in the summer. How’s your health now?

Niki: My health is amazing. I’m so healthy and I’ve never been more happy in my life.

About your physical regimen, I guess a lot of it has been about repairing your body after an injury?

Niki: It is, and you know after a major surgery or surgeries. I’ve definitely been through my fair share of surgeries. It took a good three years to recover and I have rods in my back as well but I love to jog and to walk, and I love walking my dog. I just do free weights every now and then and that’s kind of my workout. I try to keep it super simple and I do try to watch what I eat. Although I just had some amazing pierogies that were here, which are super healthy, right? Yeah?

To view our In Conversation with Niki Taylor, see below.

Niki Taylor appears in Up! Pants Montreal's fall lookbook
Get the best of FASHION in your inbox Thanks for signing up!
The latest fashion, beauty and celeb news delivered right to your email #FASHIONforall Now, check your inbox to complete your subscription
We won’t ever use your email address for anything else
Want even more FASHION? Follow us on social media.