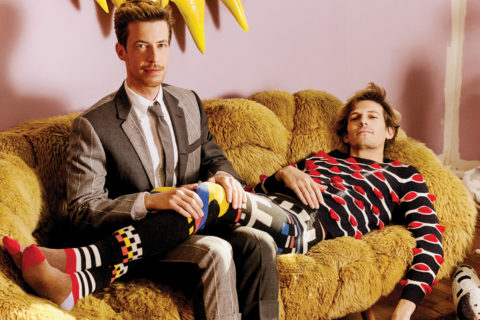 Inspo Alert! Why We Love the Wild Style of Nick Haramis & Misha Kahn

The power couple's enviable wardrobe involves a catalogue of Thom Browne's most far out designs, plus texture galore.

Brooklyn-based power couple Nick Haramis, a Canadian whose current gig is editor-in-chief of Interview Magazine, and Misha Kahn, a multimedia artist who hails from Minnesota, have received much media attention for their eccentrically decorated apartment. Yet their decadent wardrobe choices also beg for a space in the spotlight thanks to an eclectic closet teeming with pleasingly tactile pieces and scads of items by designer Thom Browne.

Haramis says his family “bopped around quite a bit” during his youth, and his early attempts at dressing were apparently equally all over the map: While listing a chronology of personal style, he highlights a period of “only wearing pyjamas in public” when he was in high school.

Once at university, he discovered the work of singular tailoring titan Thom Browne, and over the years, Haramis’s style has become manicured, perhaps, but no less adventurous. “The more familiar I became with Thom’s work, the more I imagined an idealized version of myself in the clothes,” says Haramis.

He now owns an array of Browne’s sought-after suits, ranging from formalwear to sportier fare, as well as some looks that defy definition (a specialty of Browne’s). One such outfit is from the Spring 2017 season: a cream-coloured suit crafted with shark-bite-style cut-outs. “Misha wore it to a Met Gala after-party, and now it’s got red-wine stains down the front that look like blood, which weirdly works,” he notes.

While the duo does share clothing, their tastes aren’t entirely matchy-matchy. Kahn’s inclinations veer toward vibrant, palpable pieces, and he adores the OTT offerings from design- ers like Walter Van Beirendonck, Henrik Vibskov and Cynthia Chang — looks that intrigue as well as delight the eye. “In my work, I like it when there’s a texture that tricks you — something that looks soft but is hard or vice versa,” he says. “In clothing, we expect certain things; it’s nice not to meet those expectations head-on.”