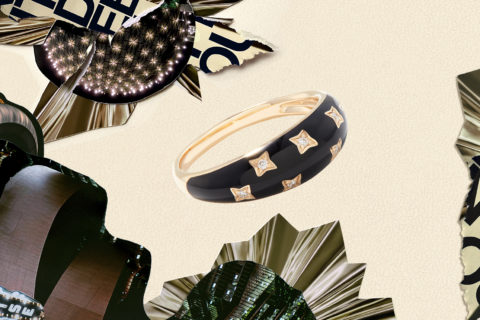 From a Cardi B collab to Mejuri's version of a championship ring.

Canadian jewellery brand Mejuri released their Toronto Dôme ring this week. The ring is part of their Dôme and the City series that showcases versions of their Dôme ring inspired by different cities around the world. The brand’s home city, Toronto, comes as the collection’s third release with existing rings already representing New York and Los Angeles. The Toronto ring is a black enamel dome with ethically sourced diamonds and whether you’re from Toronto, live in Toronto or are a fan of Toronto, this ring will fit perfectly into any existing stack.

Thom Browne’s first Canadian store opened in Yorkdale Shopping Centre this week. The quirky designer’s new space is located in the mall’s southeast wing and was designed with Flavio Albanese of ASA Studioalbanese. The Yorkdale Shopping Centre location is in true Thom Browne form – it’s modelled to look like a minimal mid-century office. Terrazzo floor, grey walls and overhead fluorescent lights set the mood for the meticulous world of Thom Browne as he launches his own space in Canada.

Reebok launched its first footwear collaboration with Cardi B

Reebok dropped its first sneaker collaboration with Cardi B this week. The collection consists of two silhouettes, the Club C Cardi and the Cardi Coated Club C Double. With a palette of red, white and black, the sneakers come in both women’s and children’s sizing – which means we hope to see some mommy and me looks from Cardi B and her daughter Kulture in the near future. Cardi also stars in the brand’s new “B Unexplainable” campaign which aims to highlight and challenge the social expectations of women.

Online sneaker and streetwear resale marketplace StockX has set roots in Toronto with a physical authentication centre. As the eighth authentication centre for the brand, the Toronto location is a reaction to the increased sales growth in Canada and it will help connect Canadian customers and sellers  which will reduce shipping and duty costs, as well as shipping wait times. The company is also launching “All-In Pricing” in Canada to reduce any unexpected fees at the time of delivery. With the physical expansion to Toronto StockX will also begin StockX Excursions: Toronto, a series of in-person and digital events including exclusive promotions, panels and launches.

This week, Aritzia launched its first Super World™ pop-up in New York with plans to open another location in Los Angeles. The New York Super World™ pop-up occupies the former Dean & DeLuca on Broadway in Soho and was designed in partnership with LA-based Canadian designer, Willo Perron. The store offers a visual experience as customers explore the various styles of Aritzia’s cult favourite jacket the Super Puff™ and its relatives: The Super (Re)Puff™ , The Super Puff2O™  and The Super Fleece™. With custom designed furniture and a surreal minimalist aesthetic, the store is bound to show up all over your Instagram feed soon.

From November 12th to December 27th Fendi will host a holiday pop-up featuring the Fendi Roma collection at Holt Renfrew Yorkdale . The seasonal pop-up is the ideal stop for fashionable gift-giving and holiday dressing. From silk pyjamas to winter essentials, the playful collection, which is clad in the Fendi Roma logo, is the sure to make you smile.