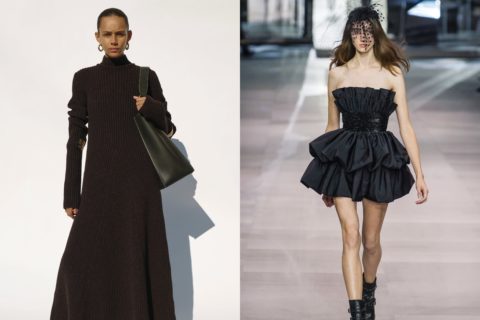 Céline vs Celine: Does the Gender of a Designer Influence Their Vision?

Could it be that women design for living, breathing 24/7 women while men (ditto) design for the imaginary woman in their heads—a concept, a twilight ideal?

But after we’d cleared things up and got into talking about the difference between how men design clothes for women and how women design clothes for women, things were as murky as ever—our homophone mix-up turned out to be a telling detour around the man-woman question. Because any talk about the difference between how men and women look at things is meaningless if you don’t append how their particular sexual identity (gay, straight, bi, questioning, asexual and so on) affects that gaze, and then you tumble into the absurdity of even trying to catalogue and ascribe a certain universal way that men look at and make things and that women look at and make things.

When the term “male gaze” came into being in the mid-’70s, things were, seemingly anyway, simpler between men and women. Men were rubberneckers and women were rubberneckees, the targets of cartoon 360-degree head swivels. In film, which is where the term comes from, rubbernecking takes the form of tracking shots that linger creepily over the hills and dales of the female figurescape. The corollary to the male camera, of course, is the female one.

Cinematographers like Rachel Morrison of Mudbound and Maryse Alberti of Creed and The Wrestler portray women as something substantially other than sexual prey. But is lechery all that differentiates the male gaze from the female gaze? Can’t a woman photographer or fashion designer lust after a woman in her work? Can’t a man portray a woman as other than a sexually desirable being? Gender seems to be a fusty and not very satisfying way of thinking about gaze. And yet if the alternative is falling down the rabbit hole of identity, the sheer variety of it makes any gaze a matter of individuality: not male, female, cisgender, transgender, gay or straight but simply “my.”

But then you look at what Hedi Slimane has produced at Celine, wiping clean the Phoebe Philo slate, and it seems there might just be something to the male gaze versus the female gaze. In an interview he did after the Spring 2019 show, Slimane asked, “Is a man drawing women’s collections an issue?”

It might be: The woman drawing a women’s collection at Céline produced assertive clothes for women who work, run board meetings, seduce people, go grocery shopping and take their children to karate class, while the man drawing a women’s collection at Celine produced micro party frocks for indie-rock princesses. He also side-swiped the French language while he was at it. No doubt the Académie française is as outraged by Slimane’s banishing of the accent aigu at Celine as Philo’s feminists are of his disregard for credible daywear—unless, that is, you count the men’s suits.

The difference between Slimane and Philo is stark. Could it be that women design for living, breathing 24/7 women while men (ditto) design for the imaginary woman in their heads—a concept, a twilight ideal? But surely Slimane is producing as much for the flesh-and-blood rock babes he hangs out with as Philo did for corporate A-types. And what about Dries Van Noten, the fly in the ointment to any theory that men solely design for the female figment of their imagination?

Could it be that women design for living, breathing 24/7 women while men (ditto) design for the imaginary woman in their heads—a concept, a twilight ideal?

What’s more, the fantasy women who float in the inspirational ether that clouds men’s imagination—in the fashion world anyway—are not passive sex toys either; they often lean more to the predator side. Alexander McQueen’s muses were all women warriors; he armoured them with corsets and knife-sharp tailoring. So were Thierry Mugler’s and Claude Montana’s women with their projectile shoulder pads. They were monumental, they were Amazonian, but were they real women? No, but that wasn’t the point—at least back then.

Fashion this spring, however, is full of real and feminine clothing. There is ruffly froth at Marc Jacobs and Rodarte, lots of gauzy netting at places like Dior and the boho thing at Chloé and Loewe with their cosmopolitan ’70s vibe.

The latter especially is stuff that’s second nature to Vanessa Seward. The French-Argentinian designer who, until recently, was backed by A.P.C. is the Frenchwoman’s go-to for clothes one actually wears. “I have a very instinctive approach to fashion,” she says. “I see what the other designers are doing, what’s going on in the street, what my friends are wearing, and it unconsciously goes through my brain and then, voila, the collection comes out.”

Nonetheless, Seward, who used to design glam gowns for Azzaro, rebels against the idea that women designers are only good at making practical wear, that they are insensible to flights of fancy. “It’s the idea that women know only how to do everyday cooking and men do grande cuisine,” she says. “It’s like that in fashion: Men do couture. But it’s not true. At the beginning of the [last] century, it was women like Vionnet and Grès.”

“It’s the idea that women know only how to do everyday cooking and men do grande cuisine. It’s like that in fashion: Men do couture.”

As does Donatella Versace, who handily produces both ready-to-wear and couture. The Versace woman whom her brother Gianni dreamed up and Donatella has nurtured has never been a stranger to sexiness, but Ms. Versace’s stewardship of the house is a case study in the slow triumph of the female gaze over the male gaze. The hallmark gold/black colour scheme, slit skirts, plunging necklines and goddess gowns still hover closely, but they have given way lately to something bordering on Prada-like. Donatella’s women are not Gianni’s sex Barbies; they are slow burns and very much in keeping with her faithful though fatalistic feminism.

So what does all this leave us with? Some watered-down notion that men tend to start the design process with an idea whereas women tend to start it with a person. But are we really going to fall for that? Because regardless of whether fashion houses are led by men or women, the runway image they project of women is extraordinarily similar.

The models all look like implausible long-limbed, androgynous unicorns. A friend of mine who has headed up tailoring for many top houses (and who wishes to remain anonymous) told me that before they begin the fitting and draping work on Stockman mannequins, they have to prepare them. They plaster wet gloves over the mannequin’s bosom and leave it overnight to soften up. The next day, they pound the breasts down, like Milanese cutlets, and then proceed to drape and pin around the newly violated shape. My friend says that all the top fashion houses work the same way, making and transmitting images of anatomically fictive women.

Ms. Versace’s stewardship of the house is a case study in the slow triumph of the female gaze over the male gaze.

By the time the clothes arrive at the stores, what we get has been relatively adapted for real bodies—they have to sell, of course—but there is a powerful unisex ideal operating that has little to do with the way many of us are shaped. And who is shoehorning us into this? Fashion. And it’s coming from men and women.