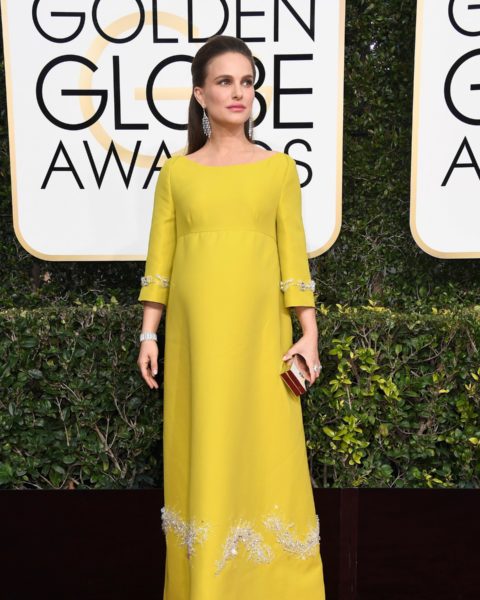 Natalie Portman has had quite a week.

This past Tuesday, the 35-year-old actress received an Oscar nomination for her role in Jackie. (The 89th Academy Awards will take place on Sunday, February 26.) Then yesterday, Vanity Fair released its annual Hollywood Issue cover (a gatefold featuring three covers shot by famed photographer Annie Leibovitz), featuring Portman and a handful of other “wonder women.” The mama-to-be looked like a goddess in a powder pink off-the-shoulder gown with soft, wavy hair.

But the shot that really caught our eye was the photo of Portman baring her bump inside the issue. Surrounded by swaths of fabric, the look is ethereal, especially with the peekaboo effect of her pregnant belly.

Portman’s pose looks very similar to another famous Vanity Fair photo shoot. Demi Moore bared her baby bump (she was seven-months pregnant with daughter Scout), and pretty much everything else, on the magazine’s August 1991 cover. Both Portman’s and Moore’s portraits were shot by Leibovitz.

Congratulations to Annie Leibovitz, whose photograph of a seven-month pregnant Demi Moore for the cover of @vanityfair was just chosen as one of @time's 100 Most Influential Images of All Time #annieleibovitz #time100photos

With the Academy Awards only one month away, the countdown is officially on to see who wows on the red carpet. If Portman’s Jackie O-inspired chartreuse Prada gown (which she wore to the Golden Globes) is any indication, we are in for a bump-tastic ride. What do you think she will wear to the Oscars? Tweet us your fashion predictions at @FASHIONCanada.