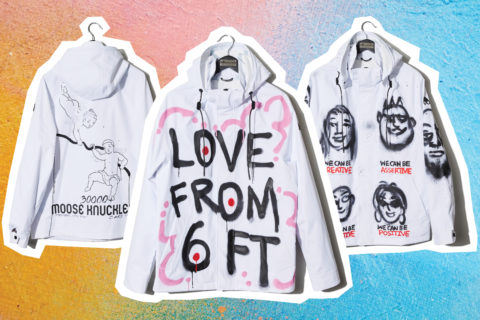 The program will include pieces by Canadian artists, too.

Canadian outerwear brand Moose Knuckles has just announced a COVID-19 relief initiative designed to support hospitals and local artists across the world. Called ‘Moose Knuckles Give a F*ck One of a Kind Jackets’, the initiative sees the brand collaborating with a handful of artists across some of the world’s major cities to create one-off, one-of-a-kind jackets with all net proceeds being donated to various hospitals fighting on the front lines of the pandemic.

Among the hospitals who will receive funds from the sale of the jackets are Montreal’s Le Centre Hospitalier de l’Université de Montréal and Jewish General Hospital Foundation.

The initiative officially kicks off tomorrow in New York, followed by Paris, California and Milan, before ending in Canada across Montreal and Toronto. Speaking with FASHION about the project, global marketing director Dominique Lagleva, said, “The brand is quite a big supporter of up and coming talent so we wanted to be able to give back in a way that very much embodied our values and the ethos we were built upon, whilst also giving back to the community.”

The Canadian artists have not yet been selected but Lagleva tells us the announcement will be made in the coming weeks. “There’s so much talent in Canada,” she says, adding that they’re on the hunt for local curators to choose the artists. “We thought it was important to have someone that’s really connected to those communities to be the one who is leading the project.”

The initial response, she says, has been incredible. “People are super excited. We just posted the sneak preview on Tuesday and it was the most liked Instagram post we’ve ever done. I think people are pining for this kind of consumer and community support [right now]. I don’t think anyone really cares about buying a jacket right now, they just want to know that what they’re buying is giving back to a greater cause.”

As for the inspiration behind each of the unique designs, the brand says the only creative guidelines it gave to the artists was ‘positivity in the face of a pandemic’. “We didn’t want to pigeonhole any of the artists to be geared towards our creative vision,” explains Lagleva. “There’s a reason why they’re artists, they have their own voice and that’s part of the reason we selected them. The whole angle of this project is to build positivity against something that isn’t [positive]. Just like movies and music, art helps to lift spirits in a time of need.” The results, she says, speak for themselves. “They came back with some great stuff and I think because we were able to select artists from those specific cities that we’re donating to, you can see the kind of twang in the individual artistry, you can tell where they’re from.”

The first pieces in the collection go on sale from tomorrow, May 8.