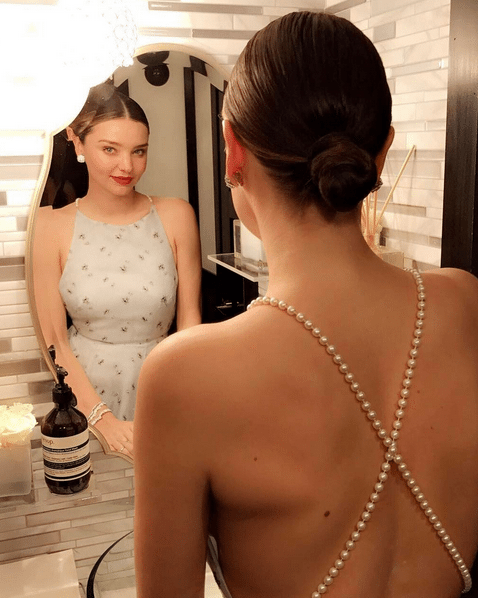 The photos are FINALLY here!

Miranda Kerr’s intimate nuptials to Snapchat founder Evan Spiegel, which took place in the backyard of their California home (there were fewer than 50 guests) in May, were so shrouded in secrecy that we, the world, never even caught a glimpse of the supermodel in her wedding gown—SOB!

But sound the trumpets, because the wait is over…

The 34-year-old newly minted Mrs. (she was previously married to Orlando Bloom and they have a 5-year-old son, Flynn) has finally shared photos from her big day in Vogue’s August 2017 issue, and the first thing that comes to mind is: THAT DRESS! It’s a fashion fairy tale IRL.

Kerr’s custom-made Dior Haute Couture wedding gown, designed by the house’s artistic director Maria Grazia Chiuri, nods to the iconic bridal gown worn by Grace Kelly in 1956 when she wed Prince Rainier of Monaco. (Kate Middleton also opted for a modern day interpretation of this classic bridal look for her marriage to Prince William in 2011). Featuring long sleeves and a full satin skirt appliquéd with lilies of the valley, the magical gown was literally Kerr’s fantasy come true. “I think it’s every girl’s dream to have Dior design her wedding dress,” she told Vogue. “I thought, if she’s up for it, I’m up for it.”

With Grace Kelly, Audrey Hepburn and Kerr’s 80-year-old grandmother as the sartorial inspo, Maria Grazia Chiuri set to work with the Dior design team to create this dreamy one-of-a-kind gown. “She wanted something like a fairy tale, and she gave me this idea, to make a dress that was emotional and simple at the same time,” she told Vogue. Kerr finished off her bridal look with a gorgeous pearl encrusted headpiece by British milliner Stephen Jones.

Before she officially became Mrs. Snapchat (she even had a custom Snapchat filter for her engagement announcement, obvi), Kerr brought Vogue along to her final fitting with Grazia Chiuri, Jones and photographer Patrick Demarchelier.

Check out the video below to see the bride share a behind-the-scenes look at the making of her breathtaking Dior Haute Couture gown.