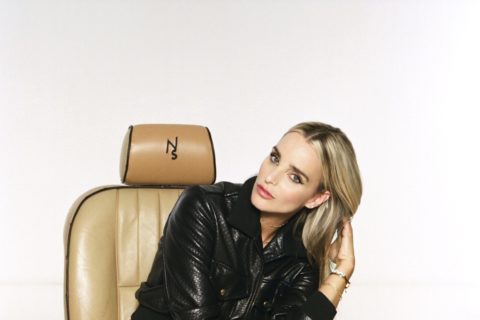 Mastering the Art of the Millennial Side Hustle with Katie Nehra

What it's like to be a fashion designer, screenwriter AND actor

One of the defining traits of the millennial generation is that everyone seems to have at least three jobs. This employment surfeit is usually characterized as some sort of moral failure – after all the two adjectives most commonly used to describe millennials are “lazy” and entitled” – rather than the result of economic instability and the changing nature of the workplace. But Katie Nehra makes having three jobs look damn good. Nehra juggles the titles of fashion designer, actor and screenwriter. She co-wrote the 2014 feature film Alex of Venice, played Anna Kendrick’s best friend in Mr. Right, and is founder/designer of the offbeat athleisure brand, Nehra Simone.

I’m interviewing Nehra at the Mercer Hotel in the midst of New York Fashion Week about her new label, which launched in 2018, but naturally, considering the expansive scope of Nehra’s life, the conversation spreads much further than that.

“It’s funny, because when I first said I wanted to do a clothing line, so many people were like, ‘Oh you’ve quit acting?’ And now  no one even asks,” she says. One of the main reasons she chooses to pursue three disparate careers is because: “If you stop living in the world you’re not going to have any stories to tell,” she says.

“Doing [multiple things], you’re going to come across so many different characters, especially in the fashion industry, that it definitely lends itself to an experience you might bring to an acting role – probably an emotional meltdown one,” she laughs.

It also nets you cool friends who are willing to star in your lookbooks: Nehra managed to rope Michael K. Williams a.k.a. Omar from The Wire into appearing in the Nehra Simone SS18 lookbook, shot by uber-hip, Ryan McGinley acolyte, Sandy Kim.

But designing clothes isn’t all Devil Wears Prada and diva-esque behaviour for Nehra. Rather, she says, “with clothes, you are telling a story and you’re sort of lending your story to someone for their life.” What kind of a story does Nehra Simone tell? “It’s very clear to me that [the collection] is saying, you should go with your gut. Don’t be afraid to say what you want and who you are,” she says. “I hope that these clothes can help give someone that confidence that they don’t have already.”

Nehra first started designing in 2007, for the same cliché reason that many designers start their own lines: because they couldn’t find anything they wanted to wear. But Nehra’s style direction has evolved worlds in the past decade and she decided to transition her line of cocktail dresses, Simone, into the more low-key Nehra Simone in 2018. “I used to be that girl that wanted to put a dress on and [now] that’s just not me,” she says. She privileges comfort above all else in her designs, which is reflected in Nehra Simone’s tagline, “99% leisure. 1% athletic.” Her new line is comprised of logo-heavy sweat suits, retro bombers and leather hoodies. “I pride myself on being a real texture freak. I want everything to feel good and yummy getting in it.”

It follows that if you look good and feel good then you’ll be able to accomplish great things, but Nehra cautions against overextending yourself. “A big lesson I learned is that you can probably do less than you think well in a day,” she says. “I always think I have all this time and then I really had to take a step back and ask, ‘How much can I get accomplished in a day.’”

She also says her secret to success has to do with being able to hyper-focus. The ability to give your full-concentration to a particular task and then switch gears and do the exact same thing with another task is a rare skill set that Nehra considers crucial to what she does. But, most importantly, and perhaps not the most encouraging thing she says is: “I think most people that are doing numerous things do not need a lot of sleep.”

Photography Courtesy of Nehra Simone
Get the best of FASHION in your inbox Thanks for signing up!
The latest fashion, beauty and celeb news delivered right to your email #FASHIONforall Now, check your inbox to complete your subscription
We won’t ever use your email address for anything else
Want even more FASHION? Follow us on social media.