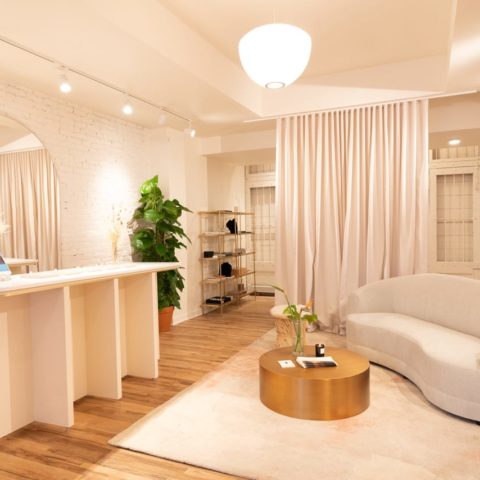 This weekend, Canadian-born jewellery brand Mejuri will take its first physical leap into the US. Though still online-only, the brand opened its first brick-and-mortar space earlier this year in downtown Toronto, allowing customers to try on pieces before having them delivered to their door. For their second showroom with the same format, they’re taking on the Big Apple, opening up a brand new location in the trendy Nolita neighbourhood of New York City this weekend.

Mejuri has grown exponentially since its debut in 2015, maintaining a 400% year-over-year growth scale. In fact, they sold more pieces during one week in 2018 than they did during all of 2017 combined. New York is one of Mejuri’s biggest markets and an obvious choice for a second location. But numbers aside, the city also just seems like a natural home for the brand. “It’s a city where culture, art and fashion are at the forefront,” say CEO Noura Sakkijha and Creative Director Justine Lancon over email. “And to collaborate with artists, designers and entrepreneurs is something we’re very excited about.” Mejuri also has plans to expand into other cities in the future, citing Vancouver and Los Angeles as potential next locations.

Mejuri’s fast-growing success comes from their modern take on jewellery shopping. “Elevated but still casual” is the description Sakkijha and Lancon use to illustrate their business model. “Our space is unlike a traditional jewellery store,” they say. “People can freely walk through (with no closed glass displays), touch, try on and style our products as they please.” Their atypical approach earned them a recent investment from Felix Capital—whose other investments include the likes of Goop and Farfetch.

The brand’s customers also stand out from those of its competitors. In the past, men have traditionally been the ones to visit fine jewellery stores (with gifts in mind) but Mejuri’s customers are 80% female. The brand wants to move the association of fine jewellery away from just special occasions. “Our mission is to make luxury a habit and introduce high-quality jewellery for women’s everyday life,” says Sakkijha and Lancon. This is helped by the fact that they produce 52 editions every year, meaning Mejuri drops new product every single week.

After opening their first showroom in Toronto, the brand noticed the sense of community brought about by the space, and they hope their New York location will nurture something similar. Mejuri often uses their Toronto showroom to host events, ranging from panels to style parties. “Our piercing parties have become a fan favourite,” the pair mentions. “It’s an opportunity for our community to do something a little spontaneous with their friends.”

The Nolita showroom, located at 43 Spring Street, will open this Saturday.