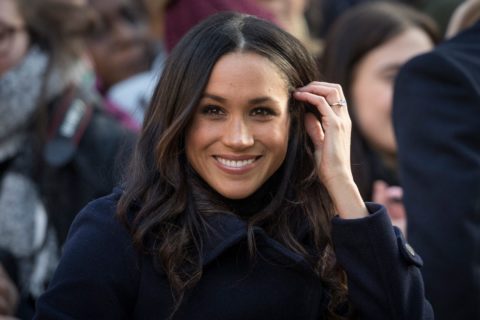 TMZ just dropped that an under-the-radar Israeli designer named Inbal Dror is competing for the opportunity to design the gown the entire world will be watching. According to sketches released Tuesday morning, the sketches read “To Meghan Markle, with love” signed with Dror’s swooping signature.

The dresses feature a lacy high neckline and puffed sleeves similar to the Alexander McQueen gown designed by Sarah Burton at Kate Middleton’s wedding to Prince William in 2011. Another features a plunging v-shaped neckline made modest by the addition of a lace panel. The third appears to be the most classic princess number, adorned with frothy lace and a voluminous skirt.

Inbal Dror is primarily known for her fairytale bridal wear and evening gowns, which go for upwards of $10k. Markle would be following in the footsteps of Queen B, who wore an Inbal Dror creation to the 2016 Grammys.

Photography by Christopher Furlong/Getty Images
Get the best of FASHION in your inbox Thanks for signing up!
The latest fashion, beauty and celeb news delivered right to your email #FASHIONforall Now, check your inbox to complete your subscription
We won’t ever use your email address for anything else
Want even more FASHION? Follow us on social media.